An Addiction is Born

Six years ago I was 44 years old and weighed 260+ pounds. If anybody had suggested to me that at age 50 I would complete a sprint-length triathlon I would have rolled my eyes and grabbed a doughnut!

Six years ago I was 44 years old and weighed over 260 pounds.  If anybody had suggested to me that at age 50 I would complete a sprint-length triathlon I would have rolled my eyes at them and grabbed another doughnut.

Fast forward to last year. I’ve lost over 100 pounds, been teaching spinning for three years, ran a ½ marathon and a handful of other races.  I own a 16-year-old Trek hybrid and ride on a somewhat regular basis.

In May, I began to toy with the idea of doing a triathlon - someday.  It occurred to me that the annual triathlon held at E.P. “Tom” Sawyer Park was coming up. I called my 27-year-old daughter who lives in DC and tested the ice.  “Want to do your first triathlon?”   Her response? “Heck yeah!”  I swallowed hard and took a deep breath.

I called my coach, Terry, who, who has completed an Ironman and numerous other triathlons, and who had walked me through my weight loss, ½-marathon training, and spin instructor training.  “Can I do this?” I asked her.  “Even with a ten-day vacation out of the country in the middle of training?” She laughed.  “Of course you can do this! I have a training plan I’ll bring over tonight.”  Dang.  No excuses now.

My husband was thrilled with the idea.  He has lost 232 pounds himself. He is a marathoner and a spin instructor as well.  He is also the world’s greatest encourager! I suggested that he participate in the event as well, but he declined, wisely knowing that I needed this to be my event, my victory.

I registered.  No way out now.  My daughter registered.  Short of injury or world disaster, it was going to happen.  I would become a triathlete.

I discovered BT’s website and began devouring everything I could find about preparing for my first tri. I read the articles written by first-timers again and again. I cried over every one of them.  I began imagining myself crossing the finish line and I cried every time I saw myself finishing the challenge.  I became a woman obsessed!

I began the six-day-a-week training regimen.  Overall, I loved it.  I loved the variety and I loved the challenge.

The biking?  Love it.  And spin class takes care of most of the training.

The swimming.  Oh boy.  That became the make-it-or-break-it training issue.  The first time I jumped into the YMCA pool and tried to put my face in the water I came up coughing and sputtering for dear life.  I totally panicked.  I was totally embarrassed.  Terry loaned me a set of triathlon training videos.  The swimming video made the drills look easy enough.  So back to the pool I went.  Same thing happened.  I simply could not make myself put my face in the water!

God bless Terry!  She came through for me again.  She met me at the outdoor pool where we would do the swim and began teaching me the basics.  Less than two months before the event I swam my very first freestyle lap ever. Over the next weeks I struggled to improve my technique and my time - it was very frustrating.  It was taking me over 30 minutes to do the 800 yards I would have to swim on race day.  I resigned myself to simply doing the best I could and promised myself that I would work hard to be a better swimmer after.

We went on our vacation and for 10 days I did nothing but walk many miles a day in the heat of the Middle East.  No swimming, running, or biking. When I got home it didn’t seem to have hurt me, however.

I trained faithfully, doing bricks on the last three Saturdays before the event. The weather was miserably hot for North Central Kentucky, but I persevered. My daughter planned her drive down and decided to make a real visit out of it by bringing her 16-month-old and 6-year-old daughters. I was getting more and more excited. Not only would my daughter and I share this experience, my granddaughters would be there to see it!

The week before the race, however, I melted down in total panic mode.  I was convinced that I couldn’t possible complete this event. What had I been thinking?  I wanted to hide under the bed. Why would a 50-year-old, still a bit of an overweight grandma, think she could do a triathlon for the first time? On what planet would she ever even consider doing such a crazy thing?

My husband, my daughter, and Terry talked me through my fears.  They pointed out that I was successfully doing all three parts of the event – even though my swimming was slow, my time was still inside the registration’s limits.  I was running the 5K distance 3 times a week, and I had already ridden the race route with Terry with no issues whatever.  A few days before the race, my fears dissipated, and I once again became excited over the challenge in front of me.

Two days before the race, my the girls arrived.  I spent the whole day before the race horseback riding with my 6-year-old granddaughter, and playing with the 16-month-old.  My husband and our older granddaughter made signs for the race. We carb-ed up that night and went to bed early. 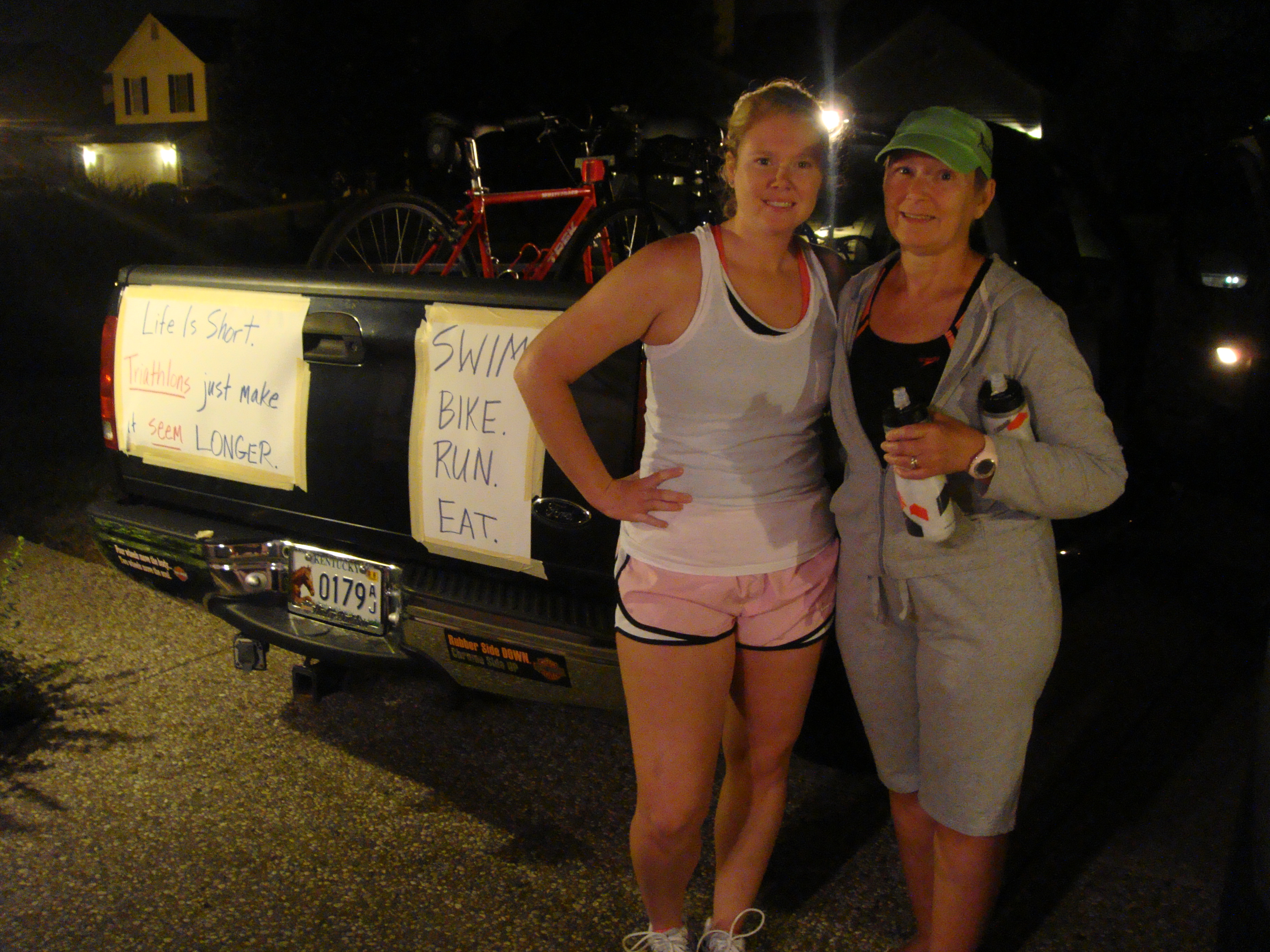 The alarm went off at 4:30 a.m.  We wanted to be there early for an end spot in the transition area. When we went to load the bikes and I saw that my husband had taped signs all over truck saying things like “Triathletes on Board” and “Swim. Bike. Run. Eat.”  Even my butterflies had butterflies, but it was pure excitement!

Terry had given us lots of helpful tips on setting up our transition area once we got there.  We found an end spot close to the start of the ride.  We laid out our brightly colored towels and all our gear.  We went to the gym, got marked up with our numbers, and attached computer chips to our ankles.  Then we made our way to the pool.

With over 300 participants, it took quite awhile for everyone to get started.  While we waited, we made new friends.  We heard all kinds of stories and saw all kinds of different body shapes.  Everyone was encouraging and positive, especially when they found out it was our first time. We became aware that my husband had assembled quite a cheering section and they were gathered on the upper pool deck.  Somebody even brought a bullhorn and was chanting our names through it! 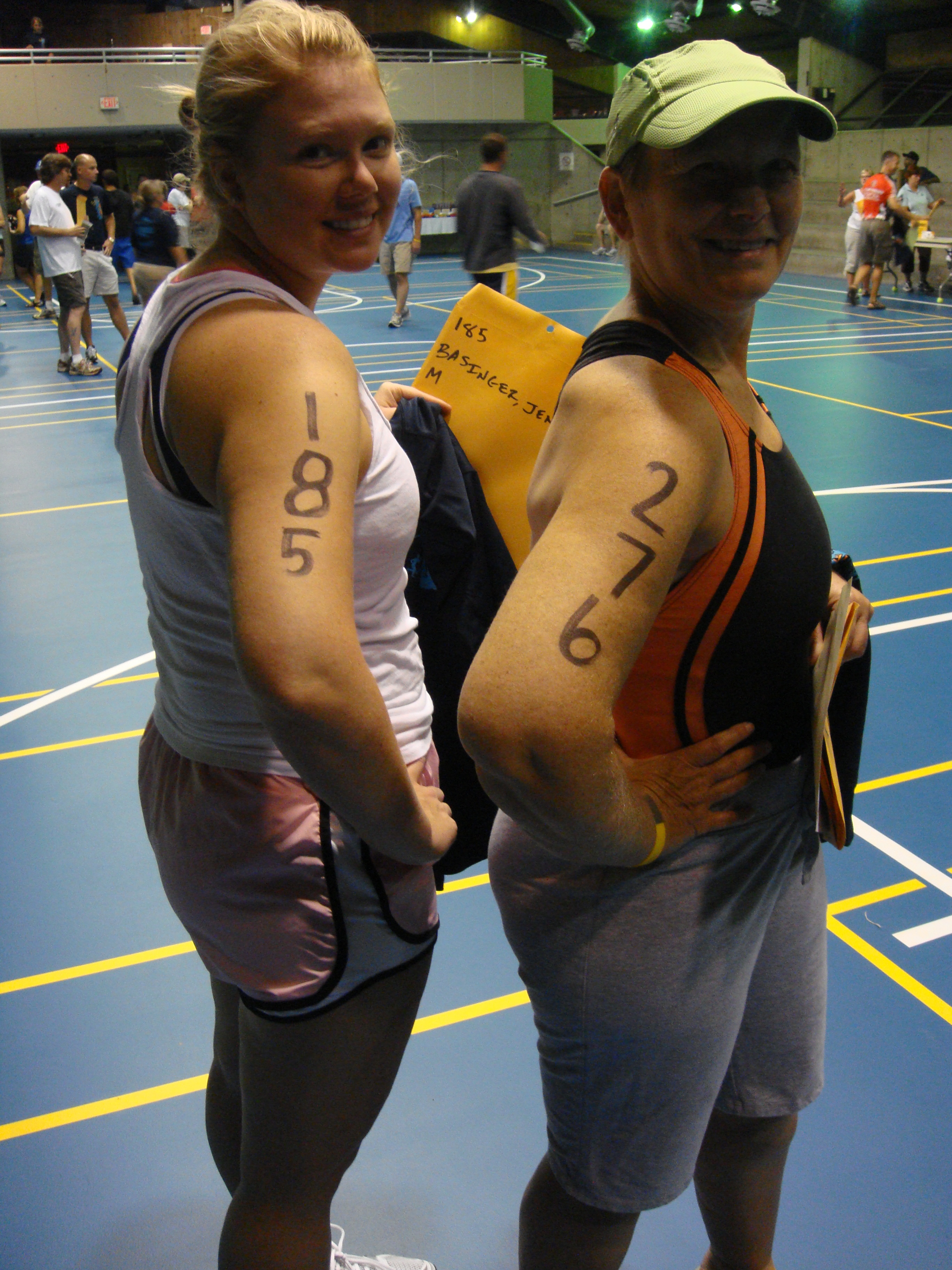 Because she had listed her swim time to be quite a bit faster than mine, my daughter went into the pool way ahead of me.  She kicked off with smooth, deliberate strokes, which she maintained throughout the 800 yards.  As I watched her, I wept with joy and pride!  She was finished well before it was my turn to swim.  I watched until she disappeared towards the transition area and then I waited for my turn. The minutes felt like hours.

And then it was time. “Swimmers, GO!”  And I went.  No panic, no fear, just pure adrenaline. The strokes came smoothly and easily. As I finished the first lap I could hear my friends and family cheering me on.  I finished the swim in less than 24 minutes! 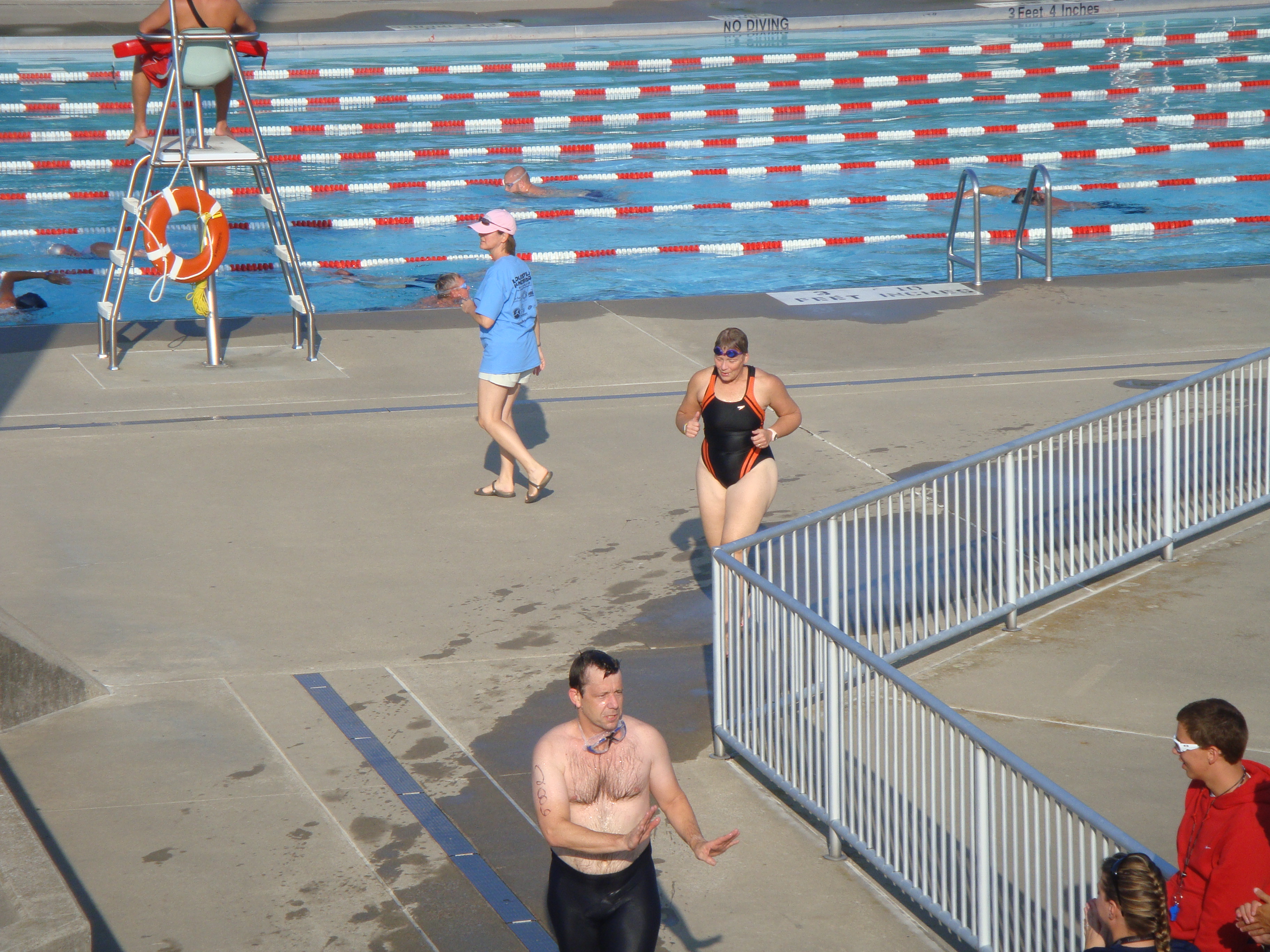 The first transition went smoothly.  When I arrived at the transition area I was shocked to realize just how many people were there to encourage me. As I clipped in and left the park, I could once again hear my family and friends, calling my name and cheering me on. 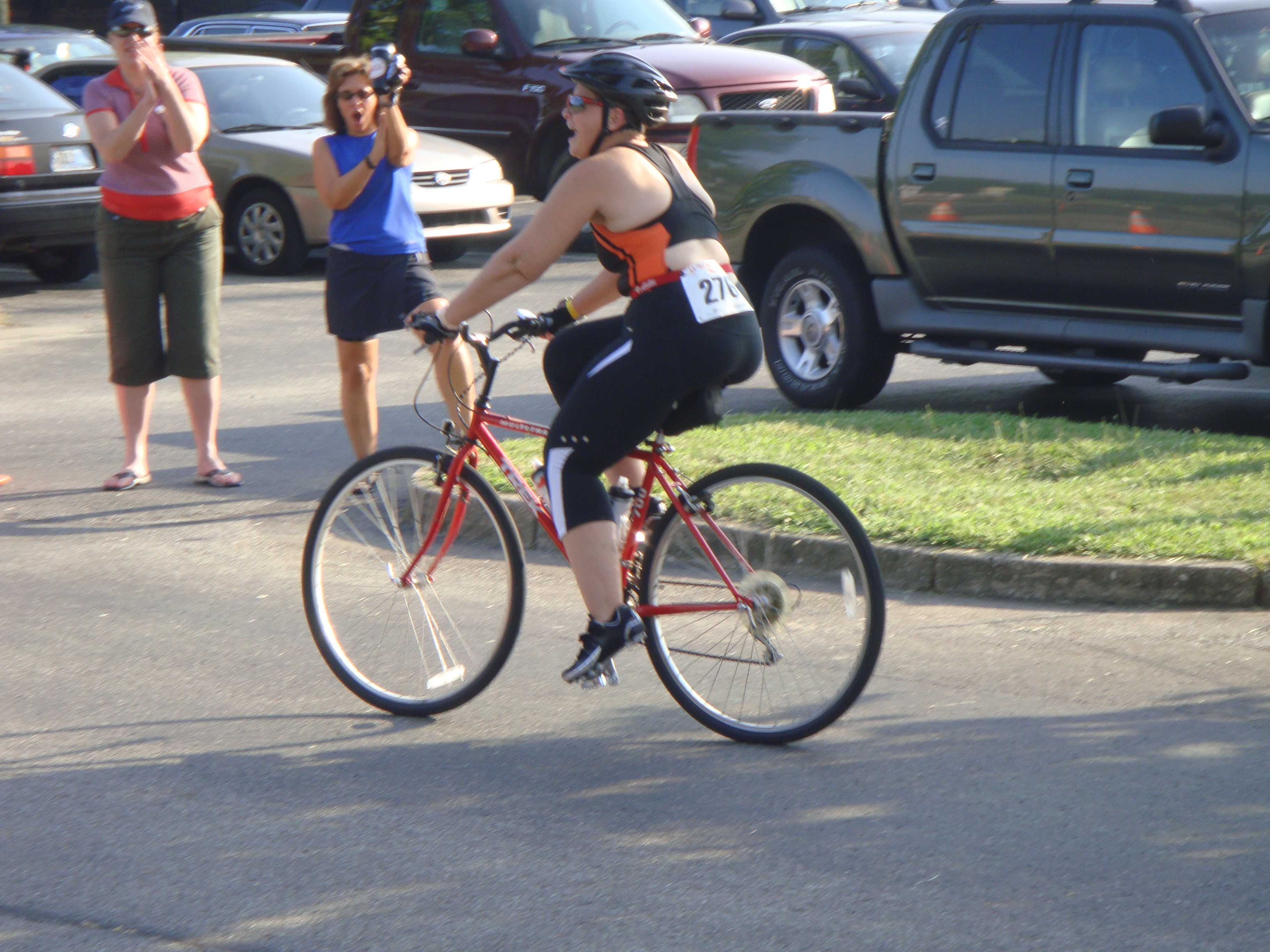 The ride was a blast!  There were rolling hills and flats, speed humps, and everything in between.  I met my daughter as she was coming back in.  “Go Mom!” When I reached the turn-around, everyone was there with signs and cowbells!  I arrived back at the transition area laughing out loud! The ride had taken me 62 minutes on my clunky old hybrid!

The second transition was a bit slower.  After I changed my shoes, I shoved a Luna bar into my mouth, drank some water, and took off. My legs really did feel like bricks!  As a matter-of-fact, they felt like bricks throughout the entire run.  Here was the true challenge of the race for me.  I never did get my legs back under me.  I struggled with the whole 3.1 miles.  After being so afraid of the swim, it was the run that slowed me down.  As I was headed out, I met my daughter as she was headed towards the homestretch of the run. “You got this, Mom!”  I wasn’t so sure!

Just when I would feel like I couldn’t take another step, somehow, there would be my cheering section, calling my name and urging me on. So on I went! At the 3-mile marker, I was just barely running. My friend Becca was there.  “You GO!” she yelled.  And I did.  The final one tenth of a mile to the finish.  When I crossed the finish line I was sobbing. My husband, my daughter, and all my wonderful family and friends were there. 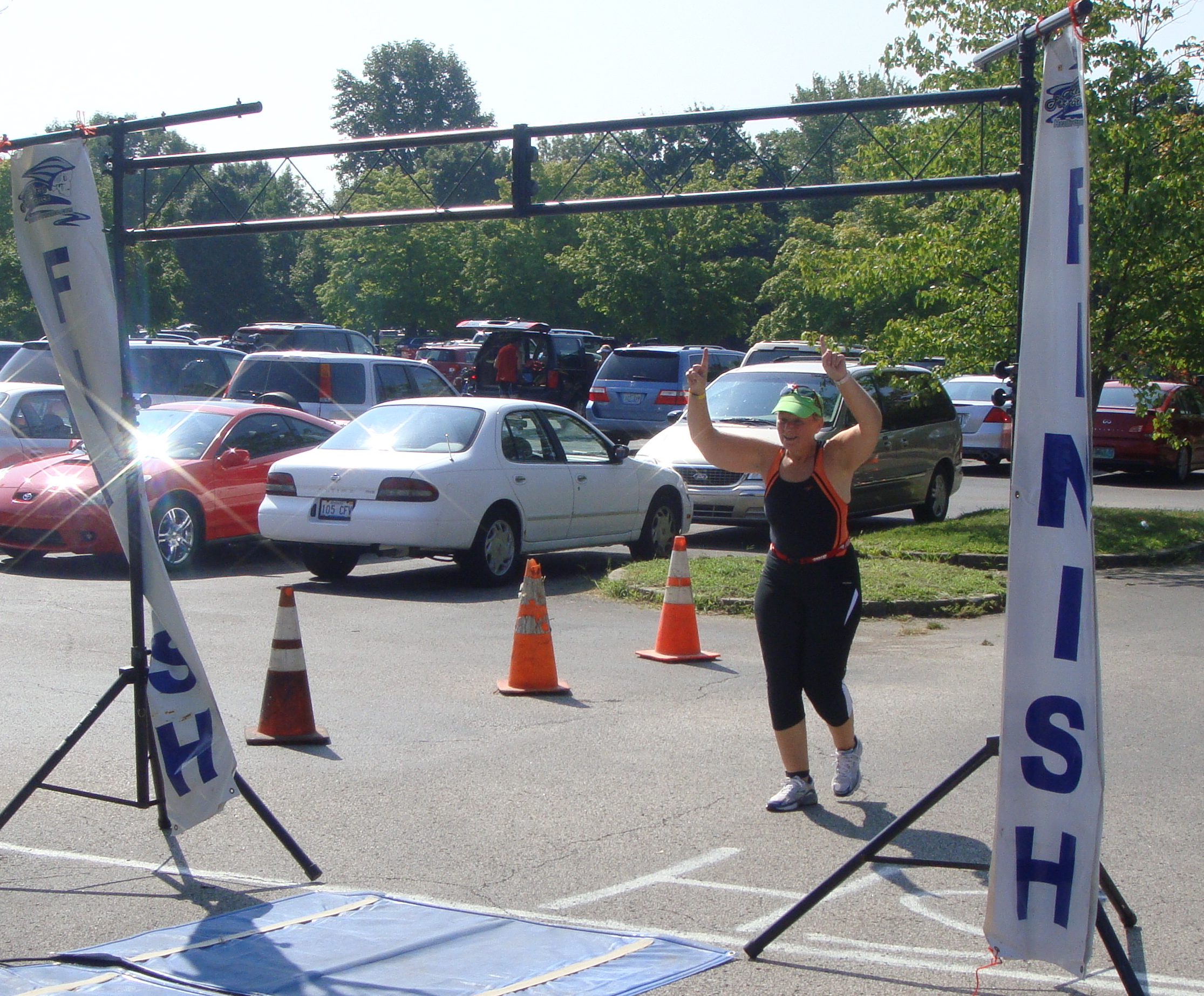 2 hours and 27 minutes.  Hardly an impressive time by any standards, but I FINISHED!  And I wasn’t last!

Quite honestly, I don’t know who was prouder, me or my husband. From 260+ pounds to completing a triathlon - and at 50 years old!  What an amazing, miraculous journey!

I have a whole year to get ready this time. And next year my husband will join my daughter and me and as we do it again FASTER!! 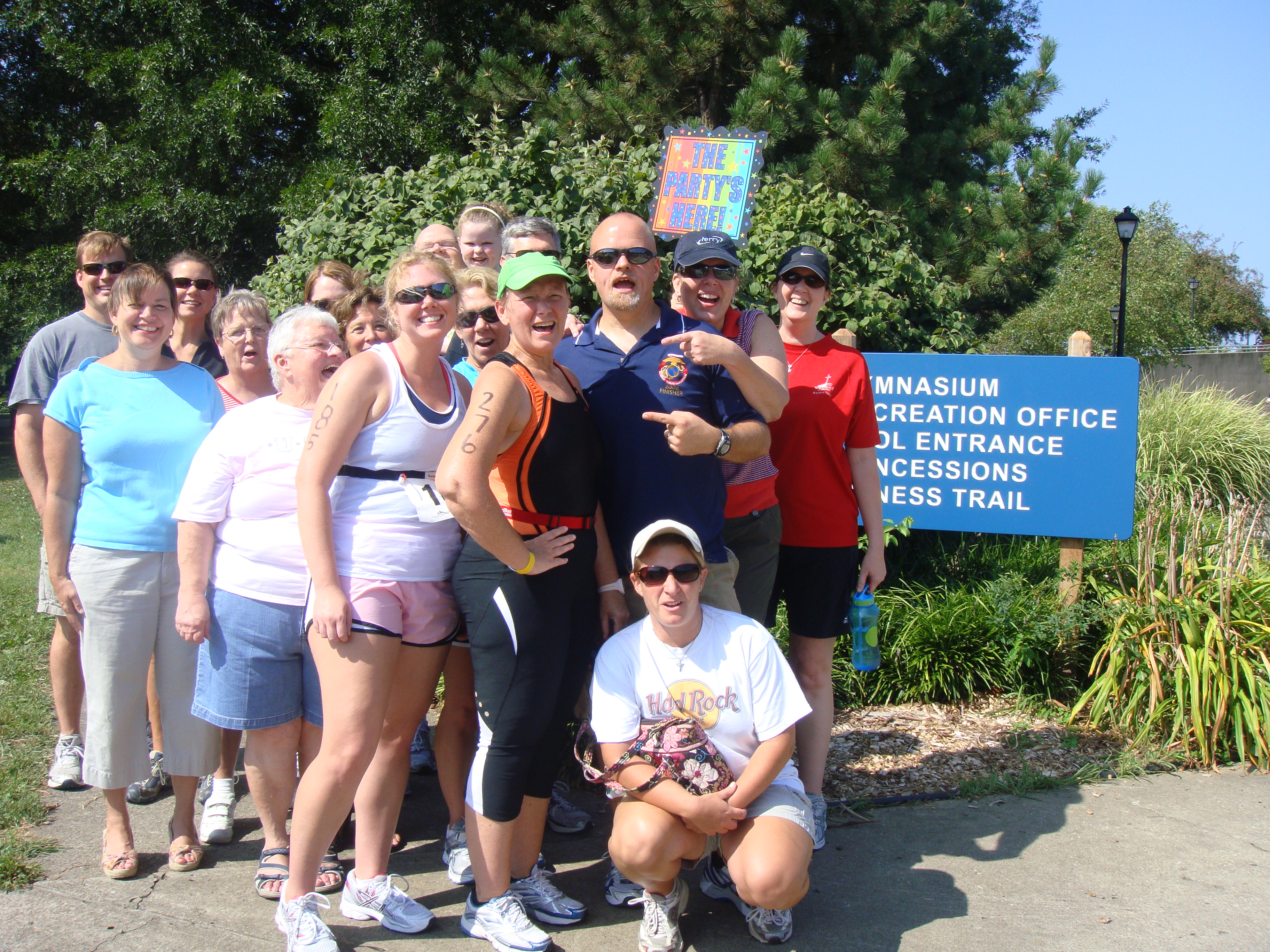