I started training for triathlons in my early 20's but never entered one. Twenty years later found me still a newbie, with many extra pounds, much more humility and a healthy dose of reality.

I had many excuses to bow out before race day:

1 - Our family completed an international move over the summer - right smack in the middle of my training schedule.

2 - I sprained my ankle on a "run" three weeks before the race.

3 - My brother-in-law decided to visit that weekend which meant I would be driving down the day before by myself (boo-hoo).

4 - My training partner/sister bailed on me five days before the race.

5 - Somehow I slept wrong on my pillow a few days before the race and I could not turn my head to the right or left.  I wasn't sure how I was going to complete the swim if I couldn't breathe.  Still, this race was 20 years in the making, and although I wasn't exactly confident, the fact that this triathlon was a women's-only race gave me the courage to go ahead.

I started training for triathlons in my early 20's but never bothered to actually enter one.  My competitive nature figured I wouldn't enter until I could win.  Twenty years later found me still a newbie, with many extra pounds, much more humility and a healthy dose of reality.  I started running a few years ago with my above-mentioned sister when we decided our New Year's resolution would be to run a marathon.  Considering neither of us had ever even run a 5K, it was an ambitious goal.  We started by signing up for smaller races - and I loved them.  I just never loved running.  I still don't.  I have gracefully accepted the fact that I am not one of those people whose day won't feel complete until they've run.  I am perfectly happy sitting on my couch instead.  But I loved races and the camaraderie at the back of the pack so I continued to train.  We finished our marathon - it took us just over seven hours to do so.  Did I mention that I'm slow?

Back to present and the Pink Power Triathlon hosted by Richmond Multisports in Virginia.  I loved the fact that it would be all women - many of them first-timers like me.  The day before the race they hosted a mandatory orientation for all newbies in which they went over important things like not putting on your helmet backwards, how to set up your transition area, and the important USAT rules like drafting.  That one scared me.  Cycling is my "strongest" event and I feel more comfortable on my beloved Trek than in my running shoes or bathing suit.  Because of the staggered start in the pool and my slow swim time, I was one of the last to start the swim...most of the people back with me were also novices and many of them were riding mountain bikes or hybrids.  I'm not knocking either of them here...but if you ride, you know that it takes a great mountain biker to keep up with a road bike.  So as far as drafting, it was reasonable that it was the only leg of the race that I would be passing anyone and, of course, there are specific rules about it.

After the briefing and packet pick-up, I decided to drive over to the venue, check out the transition area and perhaps drive the bike portion so I wouldn't get lost.  There were lots of hills.  Lots and lots of hills.  I realized that perhaps I didn't need to worry so much about passing anyone.  So I ate a healthy dinner, waited for my family to arrive, went over my checklist dozens of times and kept icing my neck hoping that I would be able to swim more than a doggy paddle.

I only woke up once in the middle of the night and was able to fall back asleep, but noted that my neck was screaming in pain.  Still, I got up at 5am, grabbed ibuprofen and a bag of ice, packed the car and was on my way.  Everyone was so friendly - even the podium seekers.   The all-male volunteers were wearing shirts that said, "Triathlete chicks are HOT."  I told the guy marking me to put a big "40" on the back of my calf for my age.  Oh, I'm hot all right.  It just comes in flashes, as they say.

I knew I could complete each of the legs independently (400m swim, a 11 mile bike, 5k run), I just wasn't sure about completing all of them one after the other considering I hadn't even heard of "brick" workouts until the day before.  I walked around the pool wearing my yoga pants over my swimsuit, not interested in showing off my less than perfect body before absolutely necessary.  Soon enough, the time came to shed my extra clothes and put my sandals by the exit to grab on my way to transition. I found my place in line.  I could turn my head without too much pain, so there was hope.

My goal for the tri was under two hours, and before I knew it I was in the pool and the guy said, "Go!"  So I went.  I caught the person in front of me and the next and then felt a tap on my foot...or was it someone kicking me by accident?  No, she passed me.  I finished 200 meters, glanced at my watch which told me I was at five minutes - right on pace.  My family was perched on the end of the pool so I could see them at every other turn and finally I was done.  Except that I had to heave myself out of the pool and my arms felt like jelly.  There's no better motivator than sheer embarrassment, so I grunted and heaved and...just like that I was out and on my way to transition.

Transition 1 and the bike

It took me four minutes just to put my bike shorts on over my wet bathing suit.  It's pretty difficult to find Athena-sized triathlon clothing which serves as a motivating factor to lose some weight before my next race.  But I got myself dressed, hobbled over to the mounting area to, well, mount my bike and I was off.  The hills were hilly, but I did pass several people - and was passed myself.  The drafting issue turned out not to be an issue.  It was pretty easy to determine whether or not I was going to be able to catch and pass the next rider in the required 15 seconds.  The bike leg flew by. 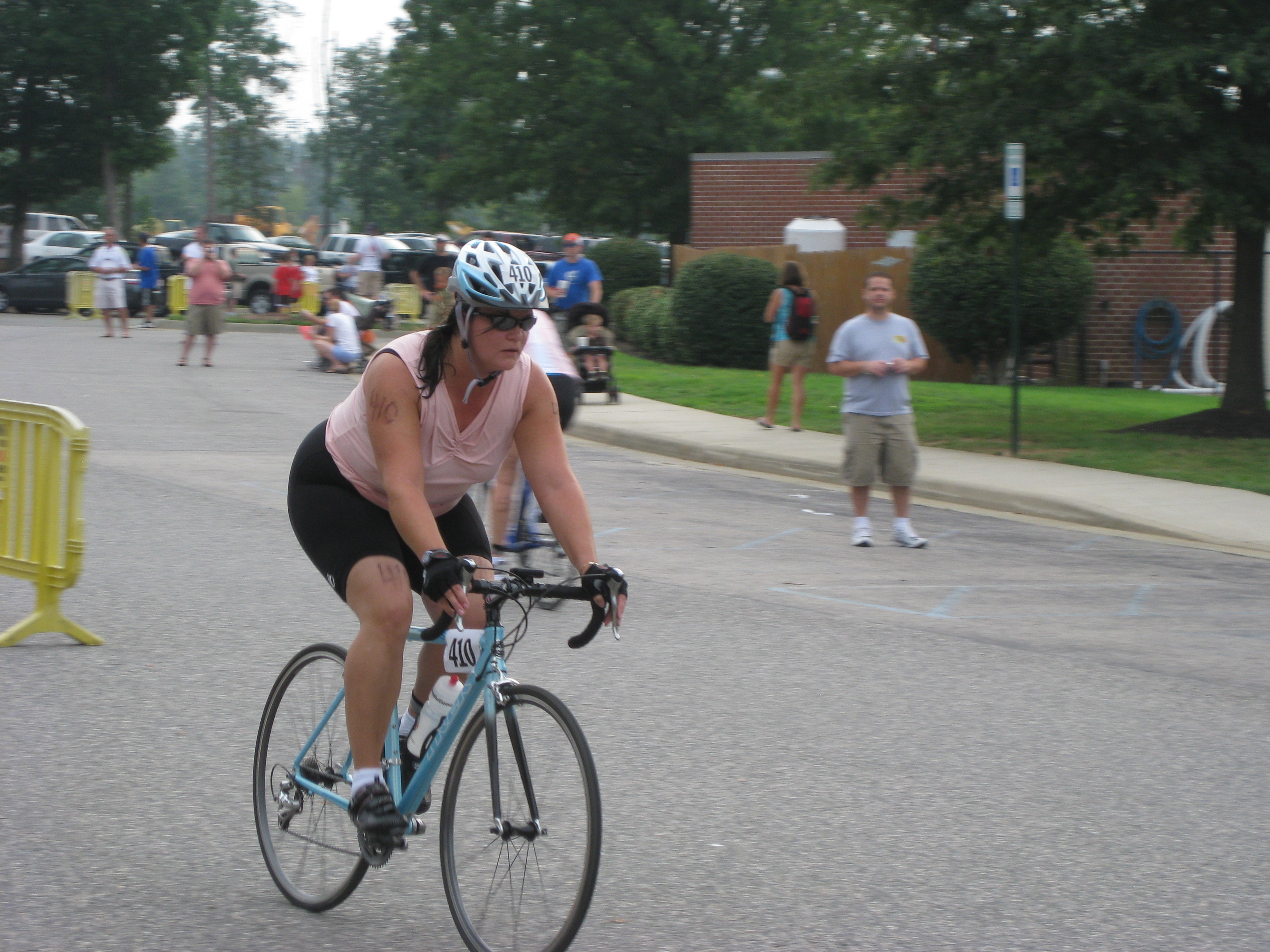 Transition 2 and the run

The plan was to ditch my biking shorts and slip my yoga pants back on for the run, but I let go of my pride and decided to just keep my shorts on, slip on my running shoes and race number, grab a bite of my Luna bar and head out.  Thank goodness there was a water station just outside the transition area to help wash that bar down.  I trotted off.  I had heard the horror stories about the bike-run transition and leaden legs and for the first time experienced it myself.  They were moving, but oh so slowly. But I looked at my Garmin which told me I was doing nine minute miles.  That's blazing fast for me.  It lasted less than two minutes.  All along I told myself that I could walk the run if I needed to - I just wanted to finish after all.

The mile one marker came up at about 12 minutes.  It was at this point I believed I was going to finish.  I walked most of the second mile and was greeted at the last water station by a bunch of topless male volunteers in bowties and shorts.  That put the smile back on my face.  The third mile was mostly uphill (thus explaining that "fast" 12 minute first mile), but I walked for a little bit, ran a little bit and then I was at the finishing field.  I just had to run around the grassy soccer field to that beautiful pink and purple balloon arch.  Hearing the announcer yelling my name, saying, "You are a triathlete!" brought tears to my eyes.  I grabbed my pink towel and was greeted by my cheering family.

I would love to see more events like this which make it comfortable for women of all sizes and shapes to experience their first triathlon in a setting that is so much less intimidating than a co-ed event.  At 1:48:01, I completed my goal and set my PR.  I will be back for more.