My First Tri - A Story of Success

When I found out there was going to be a small sprint triathlon in a month, I signed up and I decided I would try to do my best.

With only one month to train, I wasn't expecting to do very well.  I had become very good at road biking, and I knew I could run the 3.1 miles, but I had never tried swimming a distance over 100 meters.  I spent only one hour a week training for each discipline, and another few hours researching tips for beginner triathletes.

My max swim was only 500 meters, 200 meters short of the race distance, but I knew I could push myself come race day.  I successfully completed the total distances for the bike and run multiple times, each time trying to better my times by a minute and a half.

The day before the race I did a short workout of about 20 minutes, and stretched for another 20 minutes.  I ate a big dinner of spaghetti and meatballs that night.  I laid out what my transition area would look like, then packed it all in one bag.

The race started at 8:00 am.  I woke up at 6:00 to eat breakfast, then double checked my bag to make sure I had everything.  I arrived at the race area at 7:15.  I did a short warm-up while listening to my I-pod, then set up my transition area.  We grouped at the swim start at 7:50.  Only five people were entered in the race,  it was the first time it was being held.

It was a deep water start so I had time to get accustomed to the water temperature.  Luckily, the water wasn't cold - even though it was early in the morning in late August.  Being a beginner, I didn't feel the need to invest in a wetsuit yet.  We started the swim, and all my nerves went away.  All I wanted to do is get out of the water as fast as possible.  I took the lead soon after the start, but after 100 meters, the stronger swimmers were evident. I finished the swim in third, but was second to get onto the bike.  I knew I could wipeout the gap between me and the leader, but I didn't know just how big that gap was.  I didn't end up taking the lead until the last mile.  I held the short lead until T2, but I was slow on the transition, and lost a place.

Starting the run, I was tired, but wanted to finish no matter what.  The lead group consisted of only two people: me, and the girl in front of me.  The distance between me and the leader was about two minutes, I knew I could close the gap to make that up.  After a quarter mile,  I was three steps behind the leader.  I pushed as hard as I could to get the lead.  And, ten seconds later, I had it.  I just needed to keep the same pace for the remaining 2.75 miles, and I would be the winner.  But I wasn't convinced I could.  At the turnaround point, I was still feeling good.  The course was very hilly, and the long uphills were on the return.  I slowed a little due to fatigue, but still had a two minute lead.  As I neared the finish, the excitement welled inside if me.  Five more minutes of sustained effort, and I was there.  I had competed in, and won, my first triathlon!  My time was 1:10:34.  I sat and cheered as the remaining competitors reached the finish.

After the run, I had a splitting headache.  Next time, I will definitely drink more on the bike.

I didn't spend any money on equipment for this triathlon.  I swam in a regular bathing suit.  I had previously purchased a road bike and bike clothing, so I already had those.  And I wore my regular running shoes that I attached sliding clips. I took the clips from bags that I no longer used.  Oh, did I mention I'm thirteen?  Anybody, no matter age, fitness level, or lack of training time, can complete, and even win, a sprint distance triathlon. 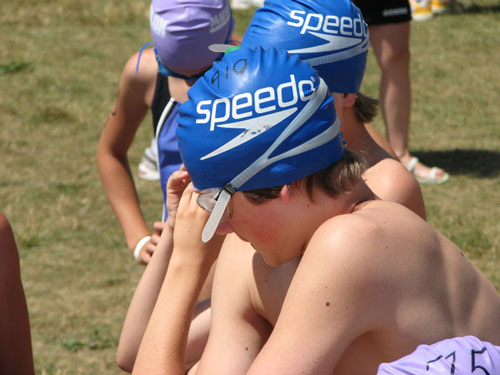