To Try or Tri Not: The Newbie Triathlete's Conundrum

A bumbling non-athlete makes her determined way to the Nation's Triathlon finish line!

I've never considered myself an athlete. My family wasn't the kind to follow sports teams or go to high school swim meets. I have a history of interests which, over the course of time, I suppose constituted some kind of ongoing athletic effort, albeit sporadic but passionate. This included Thai kickboxing, horseback riding, salsa dancing, various running sprints and a few military schools which required me to swim a mile in a full flightsuit with boots and desperately run after a herd of Marines (for purely professional reasons and much to my discomfort, I assure you).

But athletic? Sporty? No. I've never considered myself as such. Growing up I had been at best an awkward teenager. I gained some self confidence in the military; a lot of forced running will do that for you. But like a lot of women, I've had an on-again-off-again affair with my couch and overindulgence through the years. Nothing I couldn't bounce back from with a few runs or yoga classes, but not anything I paid serious attention to.

As you get older however, it becomes less and less easy to bounce back. With each year pesky things like knee pains, allergies (say goodbye to baguettes and bagels!), and asthma became more and more apparent, as did a stubborn tendency for the last ten pounds to stay put a lot longer despite a lot more effort to get rid of them.

All in all this wasn't the major beef I had with working out on a regular basis. Frankly, I found it boring and unrewarding. Watching people running in a gym pointed at rows of televisions always reminded me of pet hamsters on a wheel; I found weight lifting repetitive and slightly odd (or at least those guys who grunt to themselves frequently are), and no matter how interesting the activity eventually the shine wore off and I just couldn't see the point of all that effort.

So how in the world could I ever consider completing a triathlon? Precisely because I never thought I could.

Statistically speaking, I'm about halfway through my life at age 33. I want to try to live my life to its fullest; the most challenging accomplishment I could tackle would be something like an olympic-distance triathlon. So I registered for The Nation's Triathlon , held in my own beloved Washington D.C. Biking down Rock Creek Park? Fabulous! Running past the Washington Memorial? Awesome! Swimming in the Potomac under the Arlington Key Bridge? Perhaps death-defying!

Of course there are some pesky logistics to deal with such as, 'Oh, maybe I had absolutely no idea how to train for a triathlon?' Not to mention my athletic-commitment phobia.

Enter Team in Training. Established over 20 years ago by a New York marathon team raising money for a young leukemia patient, Team in Training (or TNT) has grown across the nation and now trains over 39,000 people a year to participate in marathons, half-marathons and triathlons. Team in Training has raised over $850 million for the fight against blood cancers to date.

In addition to raising money for a good cause, TNT provided me with a training workout schedule, coaching sessions for swimming, biking, and running, tips about the triathlon (gear? food? registration?) and mentors to field any questions a nervous triathlon newbie could have. Most importantly, once I had signed on the dotted line to commit to raise $2400 for the Leukemia and Lymphoma Society, it gave me a reason to NOT back out of the triathlon.

Time rolled by and the workouts, though straightforward and simple, began adding up. Most weeks consisted of six days of biking, swimming, and running, sometimes twice in one day. I really enjoyed my long weekend workouts with the rest of the TNT folks, many of them newbies as well, and the coached training to get practical advice and to decode training terms and acronyms (RPE, RI, negative splits and the like). The best part of all? Everyday I woke up to something new. A different sport, a different drill, and a different goal; variety abounded for this attention deficit newbie. Raising money to fight destructive blood cancers and support victims, survivors, and families of those afflicted with diseases such as leukemia was an excellent source of inspiration. And with every morning I did not want to wake up and roll out came the ultimate motivator: if I don't practice today, I may fail in front of my friends and thousands of spectators. Well that got me out of bed every time!

I was often asked how the training is going and if I was really going to race in a triathlon. These two questions answer themselves; the training was at times grueling, almost always inconvenient, and sometimes encouraging (dropping three minutes off my mile running pace was a huge win for me), but after logging all those hours, after scraping knees, blowing tires, blistering toes, breathing pool water, learning to ingest thousands of gels, and avoiding anything that will affect tomorrow's workout (like lack of sleep, sleeping-in instead of working out in the cooler morning hours, an excess of sweets, or *sob* a single martini), you slowly but surely build up that capacity within yourself to do it. And by the time you are at the morning of the race and have purchased your gear for three sports, studied the course and set your goals, figured out exactly what you can eat and drink at all hours of the day, packed and repacked your transition gear (the list alone reads like the DaVinci Code) and have put in literally miles and miles of effort - you are SO ready to just get it over with. You've done the distances several times over, you've thought of every obstacle, and all you want is that Finish Line to be crossing under your feet.

On a drizzly and cool September day, I finished The Nation's Triathlon - that's 1500 meters of swimming, 24 miles of biking, and 6 miles of running. The volunteers were great, the course was absolutely beautiful and there were moments of exhaustion and serene bliss throughout.

Could I have been better prepared? Of course! Were there difficulties? Sure, like thunderstorms, being kicked in the face a few times while swimming in an irritating wetsuit, breaking a tire, and feeling like I was running in mud to name a few. But nothing I've done so far can compare to that feeling of seeing my loved ones cheering me on as I crossed the finish line, precisely because I never thought I could accomplish an athletic event. This former bumbling, awkward newbie can now call herself an athlete with pride.

So for those of you out there who have been amazed that someone could complete a triathlon, that have never thought of yourself as an athlete all I can say is, "You'll never know unless you tri." 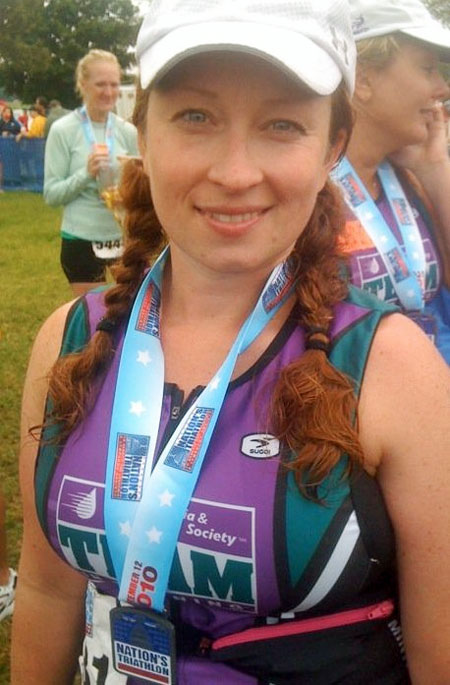