First Olympic Tri: The Angels and Demons of DFL

Afraid to Tri? Worried about being DFL? How I survived, and how you can too.

For anyone who’s ever heard that voice of doubt while training or racing, this is for you.

On the morning of July 8th, I didn’t know anything about a triathlon except that a few people I knew did them. I couldn’t tell you the difference between a Sprint or Olympic, I had no idea what a transition was, and had not yet learned what the dreaded letters DFL stood for.

Sometime during the afternoon of that same day, I went to a meeting to which I wasn’t planning on going, stayed longer than I had wanted, and overheard someone mention an all-women’s triathlon only a few short weeks away. And that is how I was bitten by the tri bug.

Skip ahead 10 weeks, I am now more aware of the goings-on of the sport, having completed my first sprint triathlon, having surrendered lunch hours and Friday evenings in the pool and watching warm afternoons melt into dusky twilight on my bike and runs.

It’s the night before my first Olympic triathlon...and I’m terrified. At 11:00pm, a cold steady rain is falling, and an even colder wind is bellowing. Even my cold-weather dogs hustle inside. If we see 50F in the morning, we’re going to be lucky.

The gun goes off and the group starts swimming. I positioned myself near the outer-rear of the pack as I am the only non-wetsuited woman. I start swimming well. After about 30 strokes I no longer feel the water thrashing around me. I look up to see how I am doing. Panic sets in. In front of me, no swimmers. I spin around violently in the water – and it takes me a full 270 degrees of rotation before I locate the rest of the pack. I was horribly off-course. Horribly behind.

And that’s when the Demons begin...

I would say that they sat on my shoulder, but at this point I didn’t even know which way was up let alone where my shoulder was. The Demons said, “You’re out of your league, you’re in last place now. You’d better give up before you drown.” I wrestled my way back on-course. Between flashes of dark water and pale grey sky, I flash back to a conversation with a friend I had two days earlier (ironically, about wetsuits). I remember laughing with her, saying that I was not planning on getting one because, “my goal isn’t to take first in the swim, my goal is not drowning!” The memory of our laughter rings like music in my ears. Quickly, I check myself – am I drowning? No. Goal met. Stay strong. Keep going.

Mine is the only bike on the rack when I finish the swim. I start down the bike stretch and about five miles in, I see people on the return route. I realize that they were in the first heat, but still, they are almost done and I have so far to go! I’m getting fatigued. My water bottle falls off causing me to stop and pick it up (and nearly crash trying to jump back on my bike).  At one of the return intersections, the flaggers have left and I have to wait for traffic. The Demons whisper, “You’re so far behind, everyone else has given up on you. Just stop now.” And I think back to several warm Sunday afternoons and the big tears welling up in my small son’s eyes as I tell him I have to go out and train. And I think that if I give up now, his tears were for a lost cause. I check myself again – have I given up? No. Not a lost cause. Keep going. I manage a small smile as the photographer takes my picture.

The run starts off painfully, as bricks always do. My calves cramp up. I slow down at a water station to get some Gatorade, but it is so watered down! The Demons laugh in my ears, telling me it serves me right for being last – the good athletes get the good Gatorade. I round the street path and head around the woods trail. I can see participant after participant riding their bikes back to their cars. The Demons roar loudly, “They are so sick of waiting for you. Everyone is going home. Nobody cares about you since you are so slow.” And just when I’m ready to give in, just when I have nothing left to give, I hear some cheering from a group waving to me, “you’re almost there!” they cry. Keep going! And I do, I run faster until the top of the hill is within sight and the finish-line is only a few yards away. I kick it into full gear, sprinting, no...maybe flying! And instead of boos or groans, I am greeted with cheers and applause – and it sounds like a choir of angels!

So thank you, all of my angels, for helping me through.

I really believe this is true now! 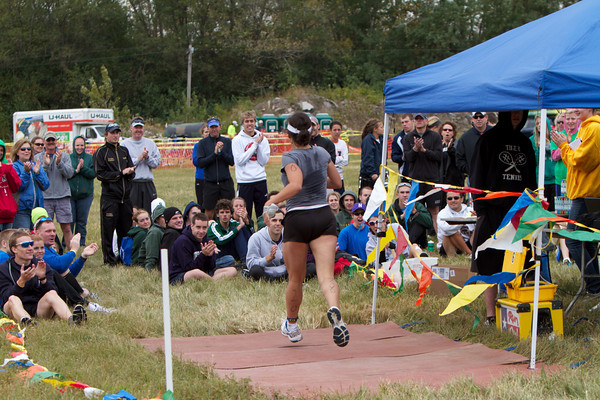