My First Triathlon...This Wasn't My Plan

From the couch to a half Ironman the hard way.

I was a collegiate athlete. From 1996-2001 I was in the best shape of my life, routinely pushing my body beyond my perceived limits as part of the NCAA Division I college wrestling team at Millersville University. Fast-forward nine years and I am your typical couch potato. Since graduation I had slowly, but surely, become lazy. I wasn’t fat, but I wasn’t fit. I would occasionally play a pick-up game of soccer, or lift some weights, but nothing consistent.

One Monday in February 2010 the pipes in our house froze. Needing to shower for work I remembered that I had a seldom-used gym membership. I packed my stuff and headed to the gym...to shower. Later that same week, the pipes at the house froze again, and I headed back to the gym. I realized when I got there that I was pathetic. My two trips to the gym in more than six months were to use the shower facilities. So I forced myself onto the treadmill before I hit the shower. A half mile, it’s wasn’t much, but it was something.

The next day I found myself back at the gym. This time I ran a mile. Over the course of the next few weeks I started going to the gym almost every day. They were short workouts, about 15-30 minutes each, but it was enough to motivate me to get back in shape.

I started looking online for something to train for. I had always wanted to do a triathlon, but I didn’t know how to swim and I didn’t own a bike. I decided to go for it though and I found an end-of-the-season Olympic Distance race in Boulder, Colorado. I signed up for it and started my formal training.

I had six months to get myself into shape to complete a 1.5 KM swim, 40 KM bike, and 10 KM run. I focused initially on learning to swim. Then I added some running training. After that I bought my first used road bike and added in the riding component. I followed the plan pretty closely and I was starting to feel pretty confident. I felt really good about myself.

In the weeks leading up to the race I started fine-tuning my mental approach. I had set a finish time goal of under three hours and had a plan to accomplish it. I put in the proper training, I had my bike, wetsuit, shoes, watch, and was ready to go. About a week before the race, however, mother nature decided she had other ideas.

A wildfire had broken out in Boulder, Colorado and it forced the postponement of my race. I realize that people who had lost their homes in the fire had it much worse than me, but I was devastated. The new date of the race happened to be during the nine day period when my family was going to be on vacation. Also, being late in the season of Colorado triathlons, my options for another race were limited.

I started looking online again for other possible tri’s. The only one I found that was an option was a half Ironman (HIM) in Aurora, Colorado. A half Ironman!?! I wasn’t prepared for that. I had trained hard, but it was for an Olympic distance. There was no way. But on the other hand, I had trained for six months and needed to find a triathlon. I talked it over with a few people close to me and decided to give it a go.

From here everything happened pretty quickly. By the time I registered the race was less than a week away. I had the gear I needed and my approach to the event was to slow everything down and just focus on finishing. But the difference between an Olympic distance and a half Ironman are significant. My longest training run was 8 miles and longest training ride was 30 miles. The HIM distances were a 13.1 mile run, and 56 mile bike. I knew nothing about nutrition, which proved significant.

The day before the race I stocked up on Gu’s and bars and added an extra water bottle holder to my bike. The morning of the race I got up early, had a bagel and a Gatorade, and left in my pre-packed vehicle for the 45-minute ride to the reservoir.

I got to the transition area and had no idea what to do. I followed the lead of those around me: setup my bike and transition stuff, got my timing chip, and put my wetsuit on. I headed down to the water and took it all in. The scene was awesome. Music playing, athletes preparing for a good day of racing, the sun coming up over the water - it was inspiring.

As the first wave took off, I prepared myself. Before I knew it, wave four, my wave, started. I stayed to the back and got off to an OK start. I was able to stay with the pack until the turnaround. I then started to panic, realizing that I still had almost 1000 meters to go, so I slowed down and tried to have fun. When I got out of the water I was at 47 minutes...not very good, but my goal was sub-50 minutes, so I was happy.
I got to the transition area and it was mostly empty which made finding my bike easy. I pulled off the wetsuit, threw on some shorts and shoes, ate half a banana, and was off on my bike. 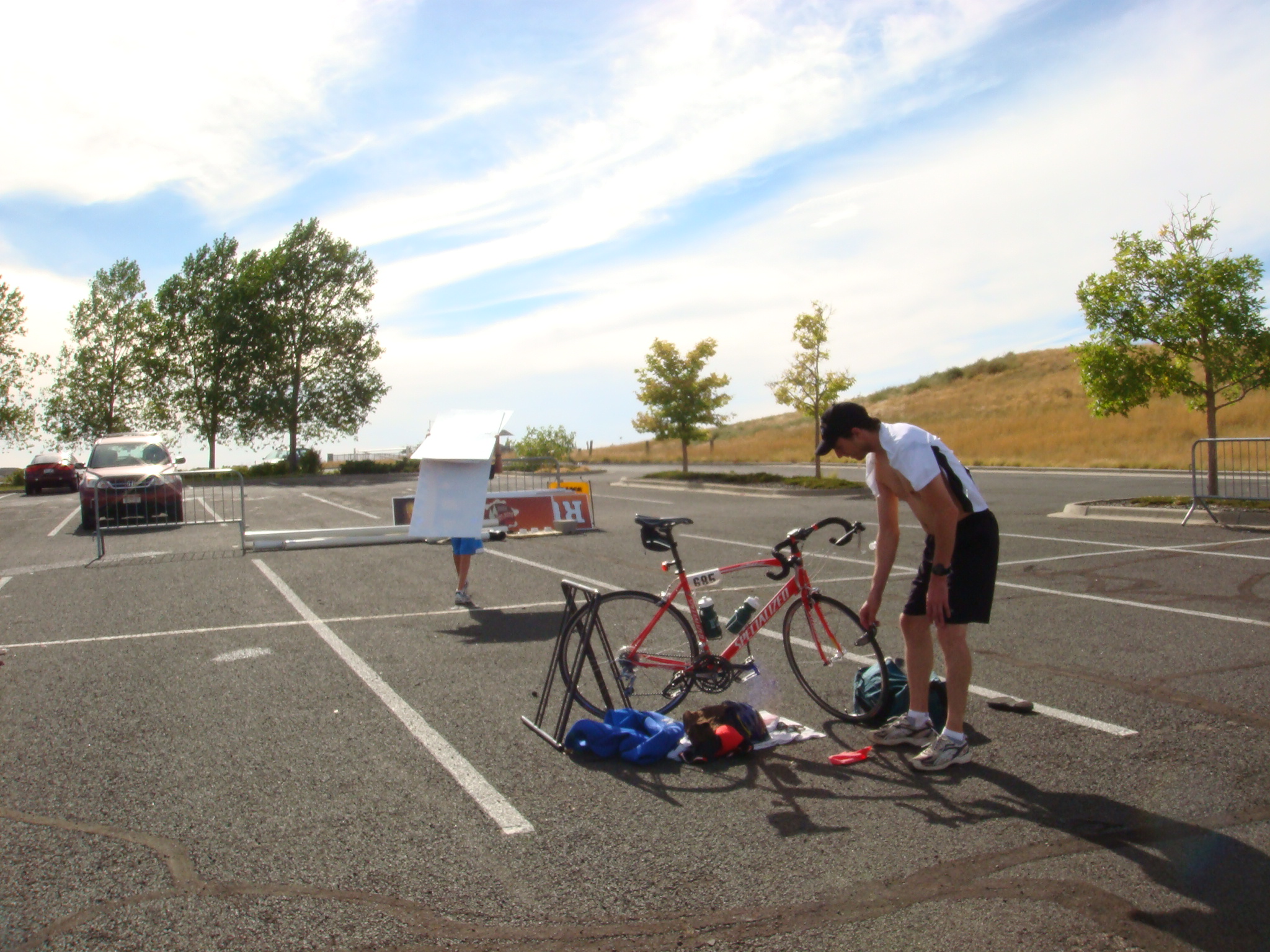 For me, the bike portion of the race was the most difficult. I was well back of the main pack and it was hard to stay motivated when I could barely even see any other riders. I plugged along the first half of the ride and at mile 28, halfway in, I started to cramp. It was at this point that I first started to doubt my ability to finish. I still had 28 miles to ride, then a half marathon to run and I was already cramping. I kept pushing though, realizing that I was going to be dangerously close to the bike cut-off time. With about 10 miles to go, I was out of water and just hoping to get to the final aid station to refill. However, since I was behind most of the riders, by the time I got to the station they were out of water and Gatorade! I was disheartened but had no time to waste. If I was going to beat the cutoff time I needed to pick up the pace. I was cramping in both legs those last 10 miles - both calves and quads, but actually passed about five riders which gave me a little pick me up. I finished the ride in just under four hours. Pretty slow, but it was the longest ride of my life so I was happy.

As I got back to the transition area, about 10 minutes under the cut-off, I was seriously questioning my ability to complete the run. I had no idea if I would even be able to stand when I got off the bike. As I put my bike onto the rack I figured I’d give the run a try.

I told myself I would jog the first mile then take it mile-by-mile after that. The run was hard; it was hot and I was close to my limit. Because the course was an out and back, there were many runners on the trail and most of them had words of encouragement. It gave me the motivation that I needed. I passed another dozen or so people doing a run-walk combo. When I got to the turnaround I felt confident in my ability to finish, but knew I was cutting it close to the cut-off time for the run. 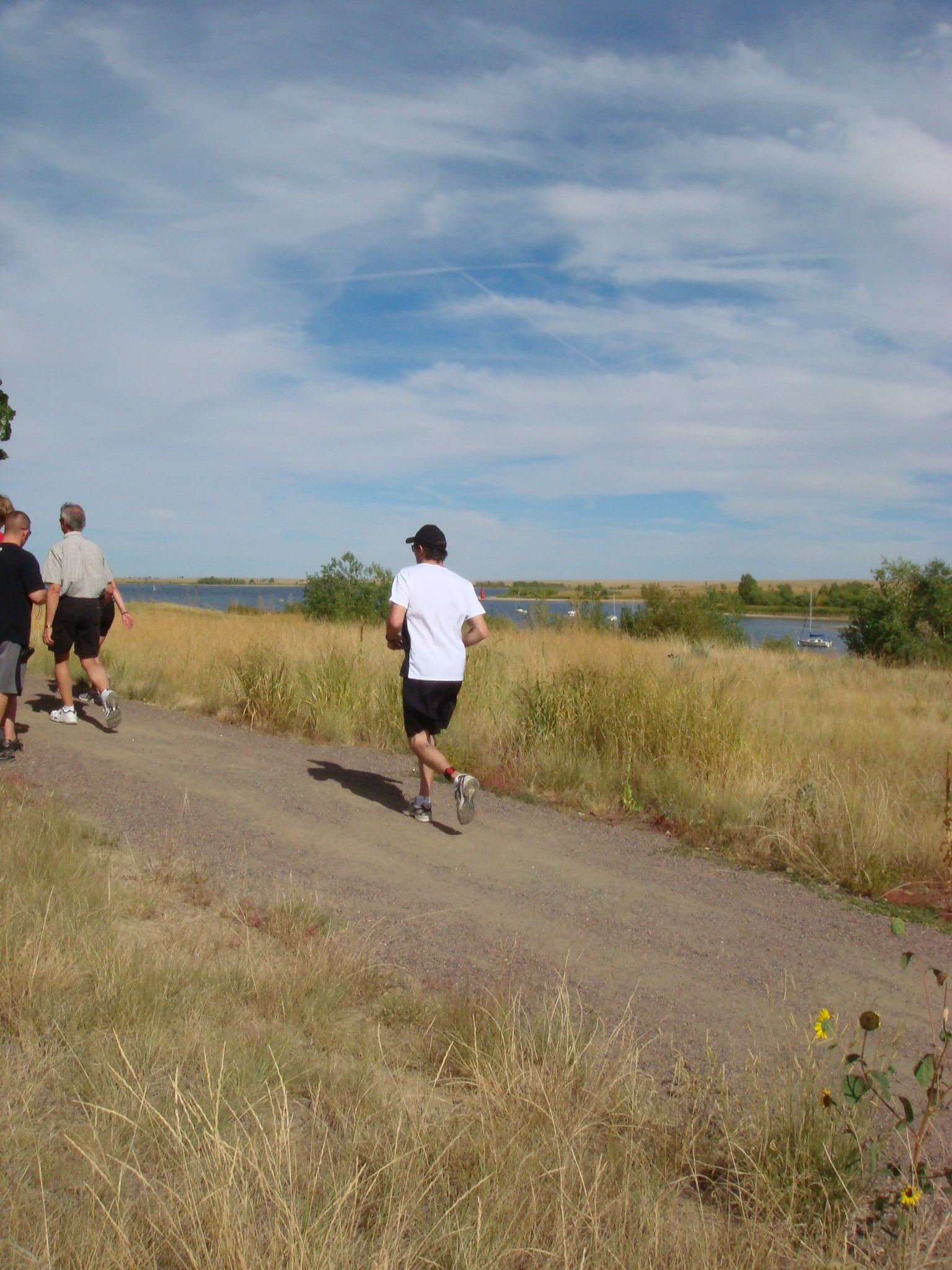 The last 6 or 7 miles were kind of a blur. Jog 100 paces, walk 100 paces. It was the best I could do. I was keeping pace with two other guys which helped mentally but I was really just about at the end of my rope. Mentally and physically I was spent. With about a mile and a half to go I realized I was about 30 minutes ahead of the cut-off pace I needed and I decided to walk for a bit to fight off cramping. Coming up over the final hill I saw my girlfriend cheering me on. I saw the finish line. I didn’t anticipate it, but emotions overtook me. It wasn’t fast, and it wasn’t easy, but I was going to finish a HIM! I hobbled over the finish line and collapsed. 7 hours and 47 minutes. Not a time to be proud of for sure, but I finished under the time cut-off.

It wasn’t how I planned. I certainly wouldn’t try that distance again without proper training for the HIM distance. Nevertheless, it was awesome. Something I’ll be proud of for the rest of my life.

Less than two days after the race, I was back online looking for another HIM to train for in the spring. This time I know what I’ll be getting into and will train for the distance. Now that I’ve finished one, I want to see how much better I can get. 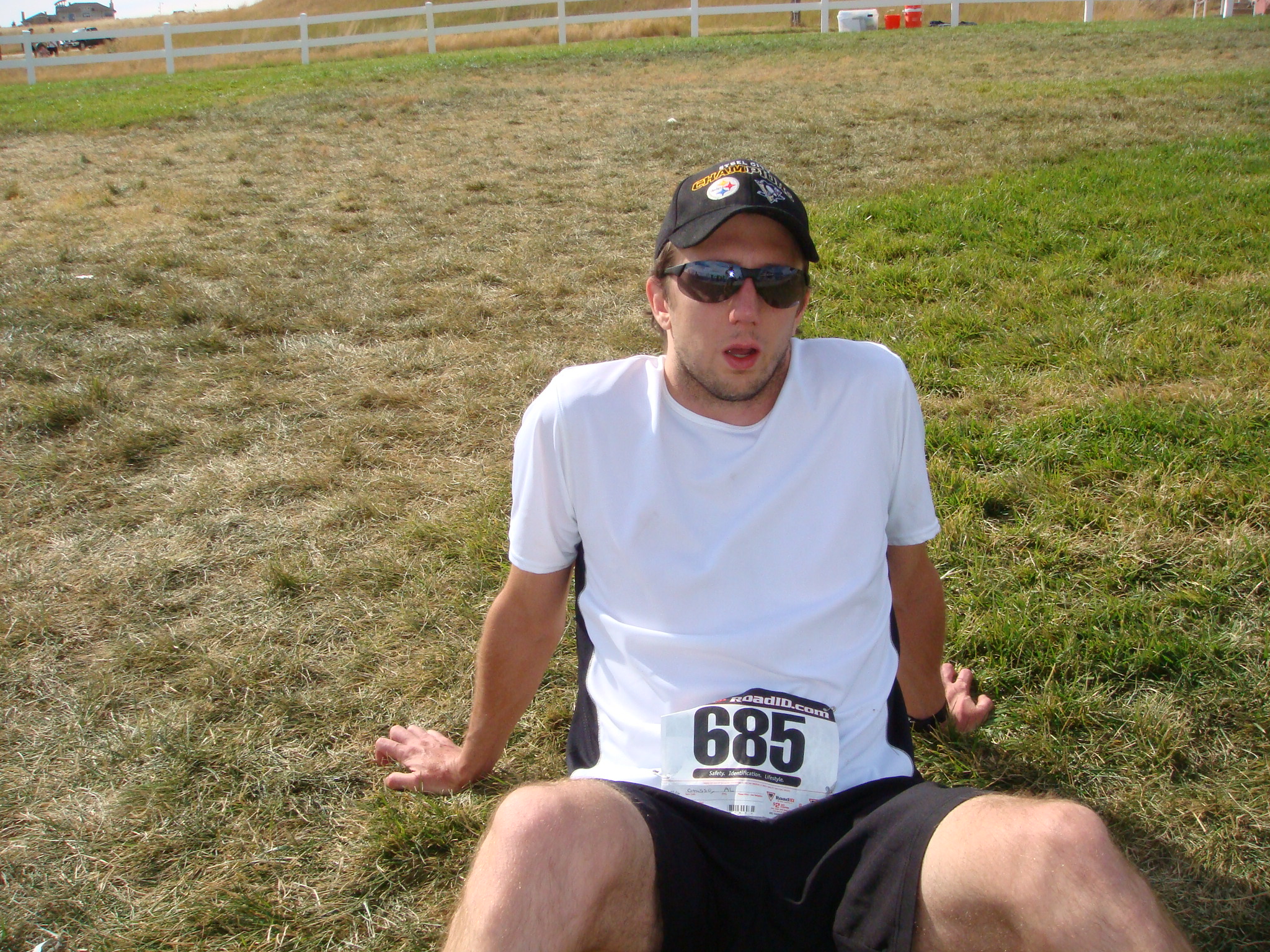