I think the biggest thing I've learned is to quit worrying about what everyone else thinks. If I let that get to me too much I would not be the fine triathlete I am today!

“I think the biggest thing I've learned is to quit worrying about what everyone else thinks.  If I let that get to me too much I would not be the fine triathlete I am today!”

These were the words I wrote recently in an email to a friend and I was only being somewhat self-deprecating.  See, a few short days ago I completed my first triathlon.  This is a fairly significant feat for a girl who has been overweight her entire life, is relatively uncoordinated, and never been much of an athlete.

Sure, I have walked in a few charity 5K events, done some recreational biking and swimming, and had a yo-yo relationship with the gym over the years.  But then a few months ago I finally decided to register for a sprint distance triathlon, something that had been a distant goal for quite some time.  I joined together with a group of other first-timers from Bayou City Outdoors (BCO), registered for Try Andy’s Tri (TAT) and began training.  Though I should confess here that one of the first things I did was search for the right tri outfit!

Then I got serious.  I attended three different first-timers seminars.  I bought a book on triathlons.  For three or four months I went to the gym during the week where I would alternate between the treadmill, spin class, and swimming laps in the pool.  On the weekends I would join with my training partners to practice biking then running, or walking in my case.  We went to a lake to practice open water swims. We received guidance and encouragement from our BCO peers that were experienced triathletes.  We all kept tabs on each other and updated on our training progress during the week via Facebook.  We were well-prepared.

My original goal was simply to complete the triathlon in the allotted two hour time limit.  For some reason, I was really nervous about that.  I just wanted to finish and to finish while they were still timing the race.  The night before the tri I had lots of nervous energy.  I attended a church service but instead of focusing on the sermon, I was calculating projected finish times on the back of the church bulletin.

The morning of the tri, I woke up 15 minutes before my alarm was set to go off at 4:00 in the morning.  When we arrived at the event, several of my training partners were there.  I set up my transition area and became increasingly nervous as I waited for the event to begin.  The energy, along with the stress and tension, seemed to increase with the number of participants that arrived.  Finally, the National Anthem was sung and we trekked over to the lake.  Then, before I knew it, I was in the water and the race had begun!

The swim felt clumsy and slow to me.  I did not feel like I had my breathing under control and I had no real concept of how I was doing on time.  But every time I lifted my head above the water I could hear one of my friends on the shore yelling my name.  So I just chanted the line from “Finding Nemo” over and over in my head: “Just keep swimming, just keep swimming.”  When I got out of the lake, I found I was surprisingly motivated to actually run to the transition area.

I glanced at my watch as I transitioned to the bike and realized I must have done better on the swim than I thought.  I started on the bike feeling good.  As I rode, I started to feel even better.  I had only recently graduated from a towner bike to a road bike, and my only regret about this decision was that I hadn’t done it sooner. I felt strong on the bike and a few times I even got to say those three little words that I’m usually only used to hearing:  “On your left!” I called out.  This was fun!

All too soon, it was time to transition from bike to run, my weakest event.  My legs felt heavy as I walked out of the transition area.  But I was ahead of schedule, so I still felt good.  I was prepared for the fact that I might need to walk the entire run portion of the event, which I did.  I saw several of my training buddies on the run course and we shouted out encouragements to one another.  As I rounded the last corner towards the start of the path to the finish, two spectators encouraged me to just pick up my knees and run to the finish line.  My boyfriend was also waiting for me and encouraging me to run, so I did.  I was gasping for breath but seeing the cheering faces of friends and strangers alike caused me to cross that finish line with my arms high above my head and huge grin on my face!  I did it!  And, I did it in 1 hour and 37 minutes, well ahead of my best-case scenario goal I had doodled on that church bulletin the night before.

I said I had just completed my first triathlon.  But, God willing, it will not be my last one.  I guess when I do my next one, I will finally have to quit wearing the first-timer’s medal I received for TAT, but until then... 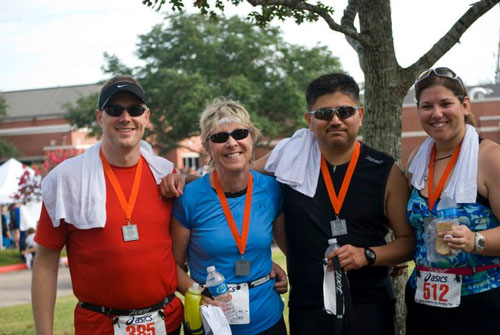