A Beautiful Morning for My First Triathlon!

Signing up was the easy part though. So easy that I signed up my 19 year old son to race with me. Now came the training.

I broke my ankle last year and was having a hard time getting back into the exercise swing of things.  I could not motivate myself to workout without a goal.  A 10K was the furthest I had run but that seemed long and monotonous to me now.  I needed to step it up a notch.  I'm 46 and size 12.  Not what I would think of when I think "triathlete."  But why not?  My husband just spent months fighting, and beating (for now) lymphoma.  That was his victory.  He is my hero.  I wanted to fight cancer, too.  Maybe I could join the purple LLS team.  I read up on it and decided an Olympic triathlon was a little ambitious for me this year.  I should start with a sprint.  I found one called Tri to Beat Cancer.  Well, how could I not sign up?

Signing up was the easy part though.  So easy that I signed up my 19 year old son to race with me.  Now came the training.  Google, Yahoo, links, articles, more links, then I found beginnertriathlete.com.  I found a training program that I thought I could follow, an aquatic center and some bike routes.  I put all the training on my calendar with all the other time commitments, like work, the kids, my husband and all their activities.  The calendar was looking pretty full, but doable, maybe.  I looked into tri-specific gear and decided, "Until I know I am going to do this more than once, I am not sinking big cash into it."  So I bought a pair of goggles and had slicks put on my sisters' bike.  I already had running shoes.

The training schedule was awesome.  If I had followed it to a "T" I'm sure I would have been ready physically and mentally for the race.  But, I didn't follow it to a "T."  I did what I could when I could.  As it got closer to race day I made sure I could swim 15-20 minutes, bike 20 miles and run  3 miles.  I never did them all in a row, but I could do each one individually.  I swam in a lake once a week (or so) and in a pool once a week (or so) ran twice and biked once.  I made some attempts at running as soon as I got off my bike.  The first time was surprisingly difficult.  The next time was better.  By the third try, I wasn't worried about that transition.

The race was two hours from home on a Sunday morning.  On Saturday, I loaded my support crew (my husband and younger children) and drove to the hotel.  My brother drove from Ohio (we're in Georgia) to cheer me on.  My son was coming from college and would meet us there later.  I went to a pre-race orientation and sized up my challenge.  I was feeling okay.  No, I wasn't going to win, but I would finish.  I registered and got my number, 620.  620? The website said they were only registering 600.  Why and how did I get 620?  It doesn't matter.  I have other things to focus on besides the triathlons numbering system.

I can't pick up my sons packet so he will have to do that in the morning.  We go check out the venue.  They are already setting up.  The first butterflies flutter in my stomach.  Let's drive the bike course.  Yeah, that's a good idea.  Whoa, I was told there were rolling hills.  These seem a bit steep and plentiful.  My borrowed bike is going to prove its' worth on this course.  Those butterflies I mentioned, were definitely more than a flutter now.  My brother and husband soothe them with words of reason and encouragement.  Okay, okay, let's get to bed, we have to be up early tomorrow.  But where's my race partner? Lost, but on his way.  He gets there about 1:00 am.  I was still awake but I didn't want to be.

Six am came quickly and we were up and on our way to the race site.  It was still dark, I didn't think about that.  I find my spot on the racks, on the last rack.  I am 620 because I am a first timer old woman.  I accept that.  It seems that all the other first timer old women got here before me.  There is no room on the rack for my bike. It's dark, I don't want to touch anyone else's stuff and I am starting to panic.  Forget the butterflies, I am freaking out!  What have I gotten myself into? What was I thinking? My son forgot his photo id to pick up his packet.  They weren't going to let him race. I still needed to get marked and get my timing chip.  Is there enough air in my tires? Man, I have to go to the bathroom.  My brother didn't drive 500 miles to see me melt down on a beautiful Sunday morning.  Then one of the other racers moved her bike to make room for mine.  She was so nice and I was such a mess, I hope I thanked her. My husband had to hold me for a minute to help me pull it all together.  Somehow, honestly it's all a blur, I get myself marked and all set up. 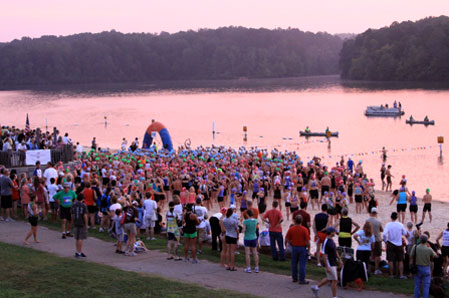 I'm standing on the beach singing the national anthem, wearing my first ever swim cap.  It's red, I'm in the last wave.  My son begins 20 minutes before I do.  I get to cheer him on and see him come out of the water.  I'm yelling and clapping but he didn't hear a thing.  My swim starts.  I take it at my own pace, trying not to kick or be kicked.  As the swimmers spread out I am doing better than I thought I would.  I take a little break about halfway and a kayaker offers me a floatation device.  No thanks, I won't be here that long.  I catch up to a 12 year old boy, but I can't pass him.  He's my goal the rest of the swim.  I never pass him but according to the results, we tied in the swim leg.

I am ecstatic.  "I am a swimmer!" I exclaim as I jog out of the water.  I trot up to the transition area.  I have water and power gel, pull on shorts, my helmet, socks and shoes while talking to my cheering section over the fence of the transition area.  My brother is trying to move me along (it is a race after all) while my husband and I discuss the daunting bike route.  I finally jog my bike to the line and off I ride. My helmet doesn't fit right, but it stays on.  It truly is a beautiful morning. My first drink of water on the ride I drop my bottle trying to get it back in the holder.  I stop and retrieve it, while my rival 12 year old passes me by.  Back on my bike, I make up for lost time and make that 12 year old eat some of my dust.  The hills are bad, but not as bad as I thought.  I was afraid I would have to walk my bike up one or two, but I didn't.  We passed a farm with cows grazing and horses in the meadow.  Have I mentioned what a  beautiful morning it was? 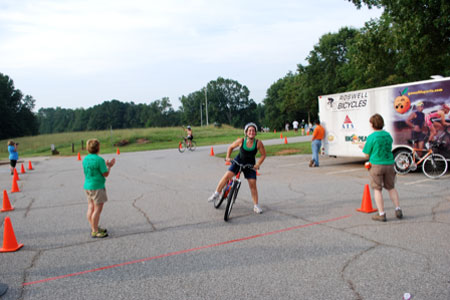 The best part was towards the end, riding as fast as I could on the smoothly paved highway, like I was something special.  Pulling back into the transition area there was a lot of yelling, "Stop at the red line, stop at the red line."  I fully intended to stop at the red line, but I guess not everyone did.  I rack my bike and take off that crooked helmet.  I am on cloud nine.  All that remains is the run.  I wasn't sure I could swim or bike, but I know I can run.  I drink more water, have more gel and set off.  Wait, wait! The volunteer reminds me I forgot my bib number.  Oh, right! I hadn't even put the pins on yet.  I was so discombobulated in the chaotic dark of the morning.  I pin it on while I make my way out of transition. 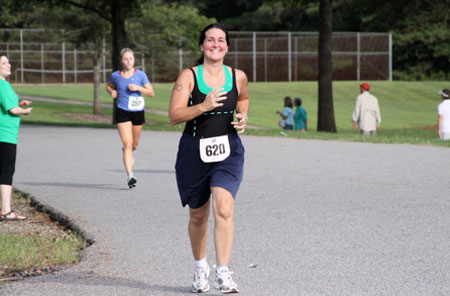 The run is supposed to be flat and fast.  If I was on a bike it might be flat and fast but this is a hill I have to jog up. What goes up must go down.  The down is very gradual and I approach the finish line.  Not so fast.  I have to run that loop twice. Aauugghh!  Back down that road, up that hill, past the water (yes please) and the photographer to the right, (smile) loop around and then to the finish line!  I can't get this stupid smile off my face!  I hear them announce my name!  How cool is that!  What a beautiful morning! 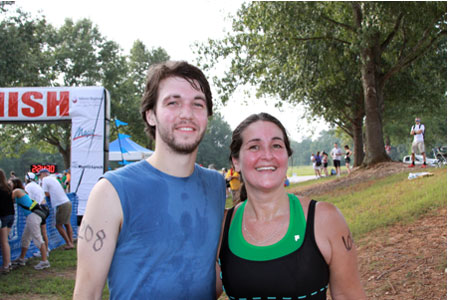