Life is a series of challenges, large and small, that we meet with the resources we have available. Completing an Ironman distance by wheelchair takes a little help from your friends.

I skipped church last Sunday to compete in my first (and last) Ironman Triathlon.  It consisted of a 2.4 mile swim in Lake Erie (which I did with my ankles strapped together), a 112 mile bike race (handcycle, for me), and a full 26.2 mile marathon (for which I used a racing wheelchair).  That’s 140.6 miles total of pulling, cranking, and pushing my way through the day.  The clock was running for all three events.  I entered the lake at 7 a.m. and finished the overall event at 10:30 p.m., in a time of 15 and a half hours.  It was, to say the least, a long day.  I don’t know what I was thinking.  It was one of those “bucket list” things.

The low point came at mile 40 of the 112 mile bike ride.  The race director had imposed an arbitrary bike leg cutoff at 5:30 p.m.  By mile 40 I knew I wasn’t going to make it.  At mile 55 almost all the other competitors turned off to head for the bike finish-line.  They had completed two loops of the course.  I was still on my first loop and had to head out again.  It got very lonely out there.

Then grace happened.  A state trooper appeared in front of me with lights flashing, at mile 80, to lead me the rest of the way.  The race director had decided to allow me to continue!  By now it was late enough in the day that the stiff headwinds off the lake had abated.  My spirits were soaring.  I completed the bike leg with relative ease.

The marathon course was little more than an afterthought for me, in a racing wheelchair.  The runners I passed in the dark were somewhat miffed that I could roll by them so easily, but I reminded each and every one of them that I had more than paid for this privilege out on the bike course.

And then I finished.  I’m an Ironman.  Wanna see my medal?

I learned a few tips about life from this experience.  First of all, though we train for these events with individual discipline and self control, we get by only with a little help from our friends.  Wayne Chasney, past Ohio Conference Moderator, was my handler for the day.  He helped with the logistics of my multiple vehicles and was assigned the task of carrying me out of the water after the swim to my hand-cycle.  He needed help for that task so he found a willing volunteer, a young student named Ryan.  Though Ryan was shy and struggled with Wayne to carry me through the sand, he later showed up – twice! – at an aid station outside of Berlin Heights to cheer me on.  Then he and his mom showed up in Sandusky on the marathon route.  Then, long after bedtime on a school night, they showed up at the finish line to cheer me in.

First Congregational UCC in Berlin Heights was my staging area on both loops of the bike course.  The congregation, led by Pastor Joyce Schroer, waited for my arrivals by hosting a potluck and a little triathlon of their own for the children in the church.  Joyce says it was the most fun they had together all summer.  And, believe me, when the church came into view for me on the bike course, it was a highlight of my race.

But Brent and Jennifer Westover and their two foreign exchange daughters were the real cheerleaders for the day.  Brent, who is chair of the Division for Outdoor Ministries, had studied the route and met me, with cowbells ringing, at almost every corner.  They waved signs like, “BOB AND HIS CHAIR, POWERED BY MUSCLES AND PRAYER.”  Later, after the state troopers had been pulled from the route and before my private police escort came back for me, the Westovers drove ahead of me and blocked every intersection, allowing me to roll through.  They said they burned a half tank of gas escorting me that day!  They pasted a sign to the back of their van that read, “UNOFFICIAL STILL SPEAKING CHASE VEHICLE.”

Another lesson I learned was that Grace Happens.  You would be astounded at the extent of the preparations I had made for this race.  The sheer level of training required was monumental.  But the physical preparation was only part of the equation.  With wheelchairs and handcycles, physical disability and medical concerns, the logistical demands were like equipping an army to march across the Sahara.  I had plans, backup plans, and backup plans for my backup plans. Even so, some of my systems failed during the day.  I was vulnerable.  I needed help.

That moment out on the course when I realized I wouldn’t make the cutoff was devastating.  Like hitting a physical brick wall.  I was working harder than I should have been (or knew I could maintain).  Yet my pace was already falling behind what I knew I would need to finish on time.  Was all this training, expense, and energy for nothing?  What was the point of even going on?

I recall talking to myself, “Should I quit?  There’s no rational hope of success if I continue.  On the other hand, I feel fine now.  All my systems are working.  I’m hydrated, well-fed, sufficiently fit.  There’s still air in my tires.  Why should I quit until I HAVE to quit?  And who knows.  Maybe a miracle will happen.”  That’s the only reason I continued: counting on a miracle.

And then it showed up, in the form of a state trooper with lights flashing.   As he led me along the course, we met a squadron of Harley Davidson riders.  They pulled off to the side of the road and saluted me.  That was pretty cool.  I saluted back.

Life is a series of challenges, large and small, that we meet with the resources we have available.  With planning, discipline, and determination, we can successfully meet many of them.  But sometimes we’re not equal to the challenge no matter how well we’ve prepared.  As humans we are mortal, fallible, and subject to limitation.

But Grace Happens.  Sometimes a race director will relax a standard.  Troopers will appear when hope had been lost.  A jolly volunteer with cowbells, poster board, and markers will accompany us on the course.  A church opens its accessible bathroom and its arms to a passing competitor.  And a high school kid picks you up out of the water and carries you across the sand.

Don’t ever doubt the combined power of people, persistence, and prayer.  And a hospitable course. 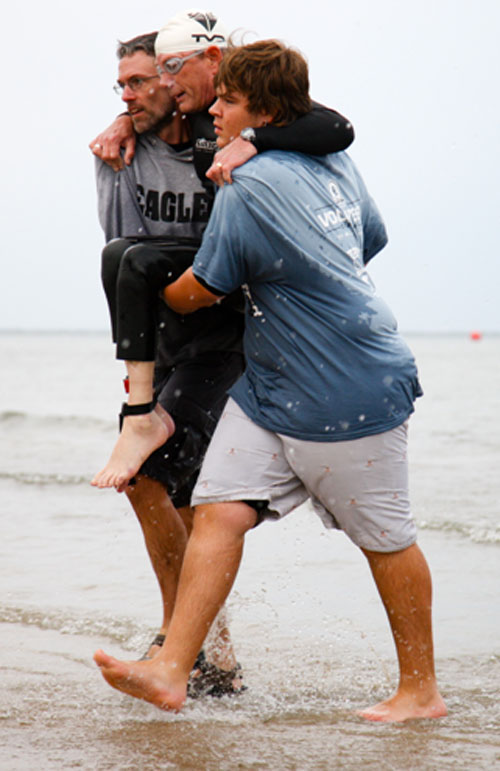 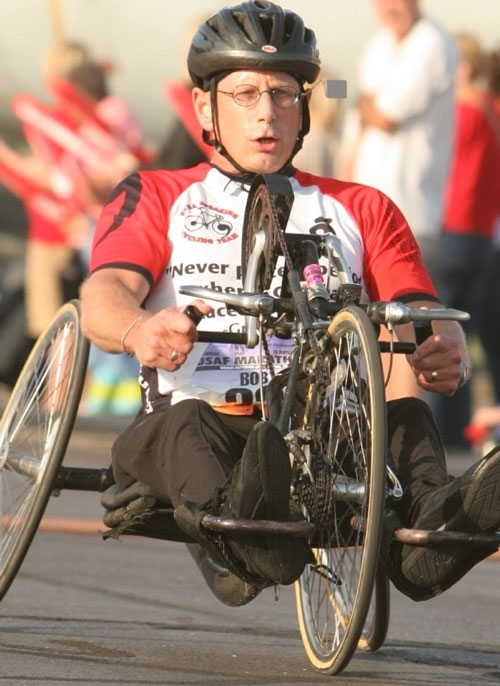 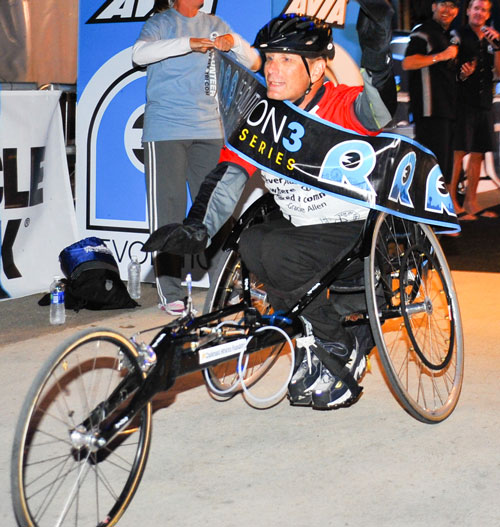