My first triathlon and a comeback from being overweight and sedentary

In high school, I was fairly active.  There was never one sport I was really good at, but I enjoyed playing various sports with friends.  That carried over into my freshman year in college.  My freshman 15 was the 15 pounds that I lost.  I had decided that running at midnight was a good idea.  But after my freshman year, a heavy class schedule and a job at a fast food joint left little time for exercise.  Fast forward 10 years, and I was at least 50 pounds overweight and had no motivation.

Thanks to my wife and the Biggest Loser, I was able to find motivation to get in shape.  It started slowly with a 5K, then a 4-mile race and finally a 7-mile race.  Once again, my wife changed my goals and pushed me even further.  She had talked about doing a tri for nearly a year, and for nearly a year I called her crazy.  Then I found myself drawn into the madness. I knew how to swim, but not how to really swim.  My bike was a 15-year-old Huffy mountain bike.  But I was determined to try.  So we signed up for a late September race.

Training started in February, in a small pool at the club where we are members.  It was definitely a struggle to swim 100 yards non-stop.  In March we purchased new bikes.  I bought a Schwinn Tourist, which is defined as a hybrid road bike.  At the time, I was just trying to get through my first tri and I wanted a bike that could become my everyday bike.  So throughout the summer I trained, with many ups and downs.  But finally September came.

The night before was a bad omen.  Our 1-year-old daughter kept us up most of the night.  The poor little girl was sick.  So after barely 3½ hours of sleep, my wife and I headed out to the race.  Fortunately it was only a 15-minute drive.  But it was a rather chilly morning, with temps in the low 40s.  We unloaded our stuff and prepared our transition areas.  I was feeling somewhat desperate, as I was really tired.  I decided to try some Chomps for the first time ever.  Probably not a good idea normally, but I think it was one of my best decisions of the day.

My wave was one of the last to start.  At the time, I hadn't heard what the water temperature was, which was probably good.  Cool 64-degree water awaited me.  I hit the water towards the back of the pack.  The first 100 yards, I was very unhappy.  I found myself wondering why I thought this was a good idea.  The cold water in my face and getting kicked by other slower swimmers made for a bad start.  But then my body warmed up, I found open water, and I found my sweet spot for swimming.  The rest of it went really well until about 50 yards from shore.  That was when my right calf cramped up.  It forced me to stop and quickly stretch it out.  I fought to quickly swim the rest of the way and was out of the water in just over 30 minutes. I found my transition area quickly and stripped out of my wetsuit.  But I had never practiced this transition, so it took me longer than I wanted.  Combine that with the need for Band-aids over a blister on one of my feet and the transition took me nearly five minutes.  I headed out on the bike feeling pretty good, however.  There was a light wind in my face, which is what I was hoping for.  I averaged well over 18 mph on the way out, and managed to keep my average up over 18 mph for the entire bike portion.  It was the fastest I had ever averaged on any of my rides. T2 was much better.  I parked my bike, grabbed my headband and was out in under a minute.  I knew from my training that I had a tendency to run fast off the bike.  Normally I try to slow down, but I really wanted to finish in under 2:45 so I had to run fast.  And that was exactly what I did.  All my mile checks on the way out were 7:30.  About halfway back I started to run out of fuel.  But there was one guy I had been pacing for awhile.  I just made up my mind that I would keep his pace the rest of the way.  When I finally crossed the finish line I collapsed to my knees.  I had given my all, and made my goal.  My final time was 2:43:30. Looking back, there are many things that I could do differently.  But I really enjoyed my experience.  I now have a real tri bike, and a burning desire to do multiple triathlons next summer.  The tri bug has bitten me.  I want to see how much faster I can go.  And someday, I would like to take a shot at an Ironman.  Whether that chance comes or not, I love this sport, and plan to make triathlons a permanent part of my life. 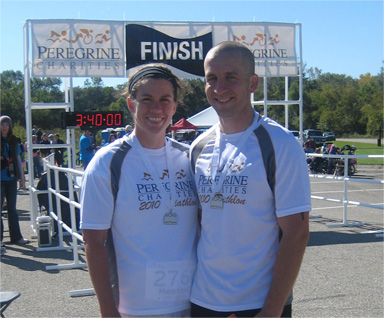