Our First Triathlon: A family affair

Our story began in November of 2009 when our daughter completed the Las Vegas Silverman Triathlon. It was the first triathlon my wife and I had experienced, and watching her compete in all three events had a major impact on both of us.

We came home from that event inspired to get fit and motivated to lose weight. The day after the triathlon we committed to run a mile everyday for a year and see where that would lead. This was no easy commitment for us, as I was 60 lbs overweight and really had not run for more than 25 years.

My wife had put on a few pounds also over the years, and had never run for fitness before.

Our daughter was a great encourager and helped us through some of the rough days by even running (jogging) with us at times.

To make a long story not-so-long, we eventually changed our eating habits and added other exercise as the pounds came off. At the end of the year I had lost the 60 lbs I needed to, and my wife had lost 35 lbs. During that time, I got a bike and started riding on weekends with my daughter, and eventually my wife got a bike also. We were exercising regularly but we were looking for some other fun things to do. Our daughter was training for Ironman St. George and was going to do a little sprint triathlon in Lake Havasu during spring break. She suggested signing us both up.

At first we were both a little hesitant. I’m 57 and my wife is 54, and the thought of racing seemed a little crazy. Besides, neither one of us really knew how to swim.

Our daughter greatly encouraged us again and we conceded and obtained a membership at the local wellness center. A colleague of my wife's volunteered to give us a couple lessons, as she had been a collegiate swimmer. She was also registered to be the swimmer in a relay team that was going to compete in Lake Havasu also. My wife and I leaned heavily on our daughter’s expertise, and she set us up with a 12-week training program which we followed very closely.

Finally the day came. Transition bags were packed, wetsuits and bikes were ready, and we were headed to Lake Havasu for our first triathlon at 4:30 in the morning. The temperature was in the high 50s with a 10-15 mph wind coming out of the southwest. The water temperature was in the low 60s. I can not tell you the sense of excitement I was experiencing, which I had not felt in a long time. My son and his girlfriend came to watch as well as my brother and his wife. We arrived and unloaded the gear. 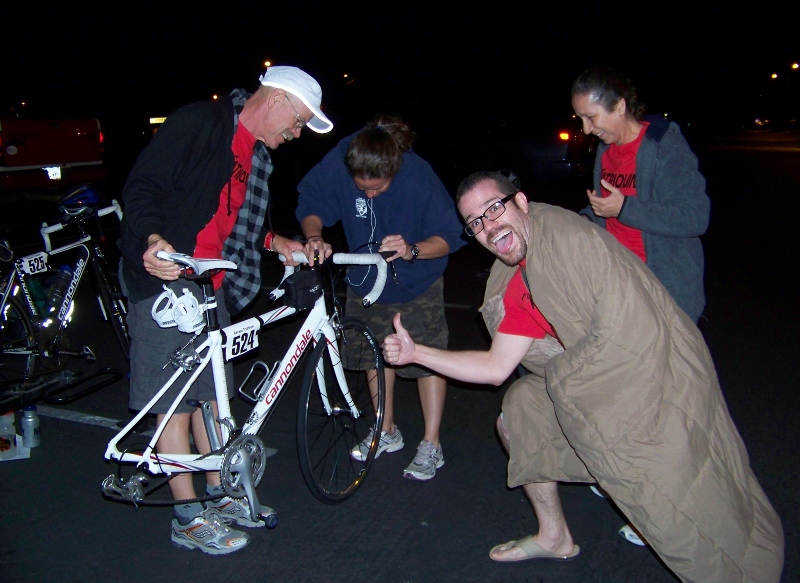 It was a short distance from the parking lot to the transition area since everyone pitched in. The mood was very light but there was a little nervousness in the air also. We finally reached the transition and set up. It was nice because all three of us were together on the transition rack as well as another friend from our town. We finished setting up and we helped each other into our wetsuits.

I have to admit my apprehension as neither my wife or I had swam in our wetsuits nor in the open water before. We all got in the water and once the initial shock wore off I thought I would be alright for the swim. I actually swam out about 25 yards and was amazed at how buoyant I was in the wetsuit.

We started in waves and the ladies went first. My wave started and I decided to go out slow and steady. I got out in the water about 100 yards and found myself completely out of breath. The panic mode set in, and all the practice I had done in the pool went out the door. I asked God to please not let me drown in front of my family. I ended up doing a variation of the breast stroke to finish the swim and came out of the water pretty spent. I met my wife in the transition area and found out she had just about the same experience I had with the swim.

The transition went pretty smooth except we probably spent a little too much time there. It was OK because we were able to encourage and help each other to the bikes. We had to take the bikes from the transition to the pavement and we went together. 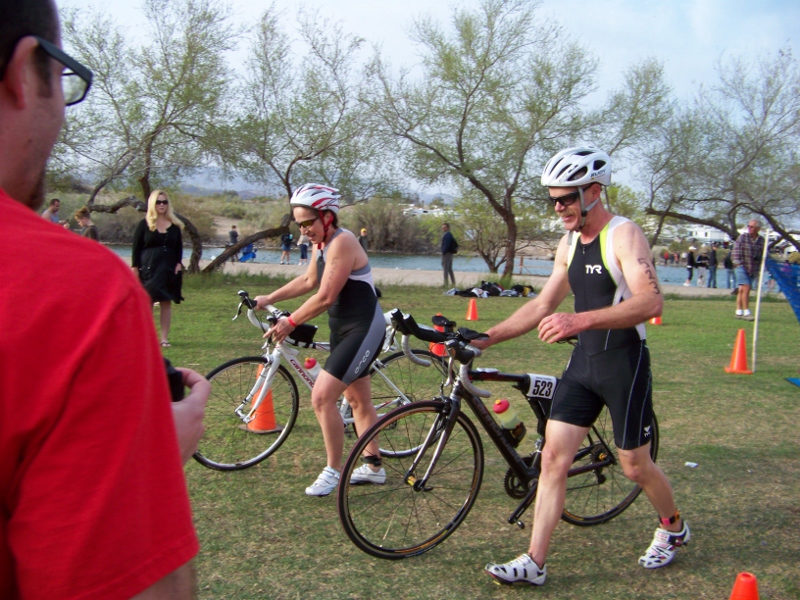 Once we hit the pavement we were off. The bike ride was totally so much fun. I got a second wind and my legs came around. I actually passed a few people who had swam right past me a few moments ago. Our daughter was out on the run when I came in for the run transition. Our plan was for her to finish first and then she was going to come back on the course and escort the old guy back in. Then we were both going to get Mom and all come in together. 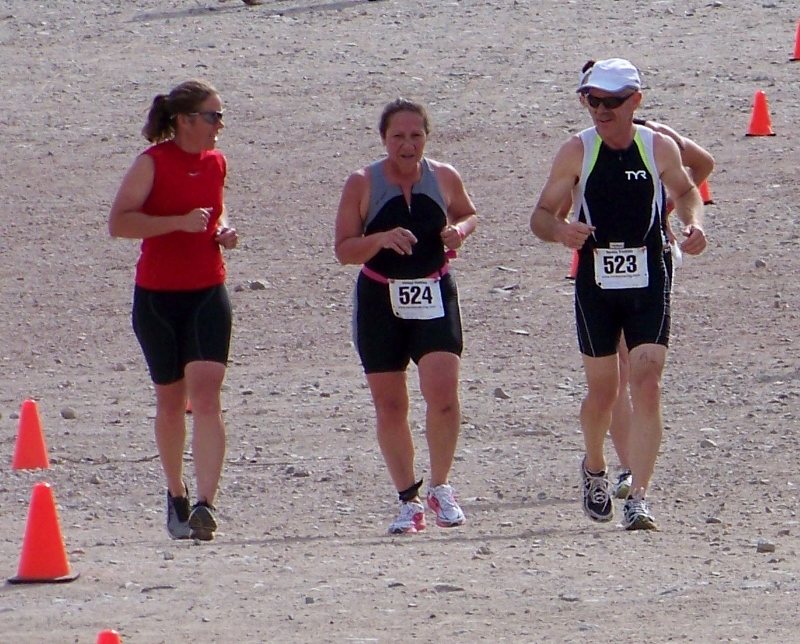 I can not begin to tell you the sense of pride I had coming in with my daughter at my side. We were about 100 yards fro the finish when she said, "OK Dad, give it all you have. Remember where you were a year ago and finish as strong as you can." She peeled away and I sprinted to the finish as fast as my short legs would go.

After I caught my breath we both went back on the course and escorted Mom in. At about the same point our daughter gave my wife the same order, and what a feeling of pride came over me when the announcer said this was the third member of my family to finish. We all hugged and celebrated as though we had won an Olympic event. What a thrill to see our times posted. Our daughter got first in her age group and 4th overall for the women’s division. My wife placed second in her age group (of two participants) and I received 3rd in my age group (of three participants). It did not matter as we had one of the best times as a family ever. The ride home was one of great excitement as we even started to plan our next race. I know one thing I WILL do before the next race and that is to practice some open water swimming. 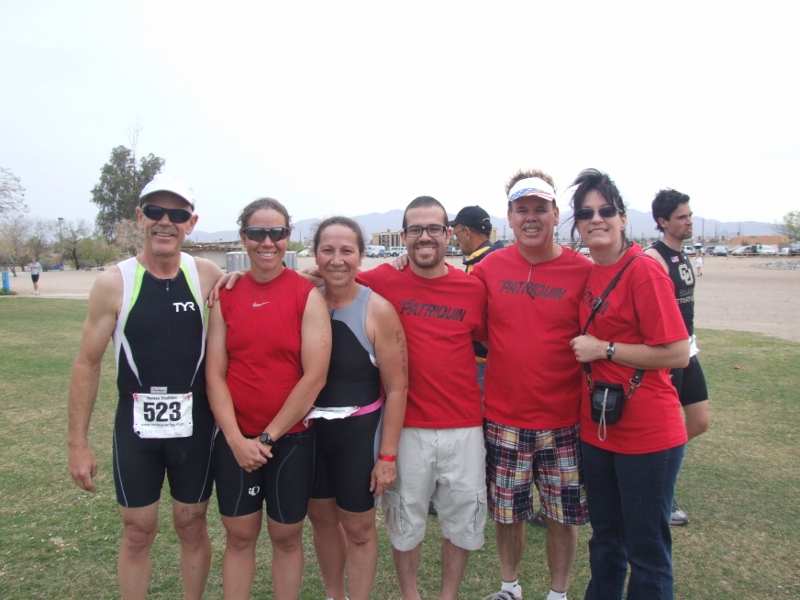