Feeling confident and cocky, after finally losing some weight, I got off my back side and into triathlon.

In January of 2010 I got off the couch and got serious about my physical fitness. I was 45 years old, 70 or 80 pounds overweight and pretty miserable. I had never been in in incredible shape, stopped being an athlete of any kind in Junior High school and thought buffet was some sort of French sport.

But eating right and exercise paid off, and I lost most of that weight and was getting into some form of shape. Losing weight made me feel confident. Too confident.

Way back in 1984, I was Aquatics Director at a YMCA, and my boss was a triathlete. I had seen the Hawaii Ironman on television and dreamed of doing that race. I trained a little with my boss, helping him on the swim. He got me on a bike, but that is as far as it went.

I went on to a better job and a better college and forgot all about triathlon. I do not remember ever giving it another thought.

Then the thought finally did occur to me that I could now chase my triathlon dream and it was nearly all consuming.  Feeling confident and cocky I decided to start training for a Half Ironman. Never mind that hadn't swam or biked in 25 years and I never, ever ran unless I felt my life was threatened.

I really do believe the impossible just takes longer, so I picked a race, found a training plan, and got to work. That Half Ironman I initially chose was yesterday at the time of this writing and I was no where near the start or finish line of that race.  What I was doing was my real passion, enjoying my Church where I Pastor and I where I belonged.  It's not that a Sunday triathlon is not in my future, it's just that this particular one was just not for me.

While I was enjoying my Church I was also licking some wounds ,limping around, whining a little, and answering gasped questions about the cuts and road rash on my face.  All this from the Triathlon I had finished the day before, which was not Half Iron I originally aimed for, but an Olympic instead.

It was as close to being over my head without actually taking me under as it could be. It was hard, but it was a good hard. Three weeks before that day came my first Sprint triathlon.

My training plan came straight from this great website, BeginnerTriathlete.com.  I started with the half iron plan and then about halfway through switched to the Olympic Balanced Three. That is three balanced workouts in each discipline per week for 20 weeks.  It was challenging but doable.  As I worked the half iron plan it became obvious to me and my coach (who is also me) that I was no where near capable of a half ironman.  As the great theologian Dirty Harry once said, "A man's got to know his limitations." Mine were obvious, and attempting to complete a half ironman was going to make for a very bad day.  Scaling back was the only sane thing to do.  It turned out to be ingenious on our part.  When it came down to manning up with the money for races, I scheduled a sprint for early March, and an Olympic for the end of the month.  The Olympic was on a Saturday making it even better.

I also had some limitations that were out of my control.  A nagging knee injury called Pes Anserine tendonitis.  The Doc also said I had bursitis and arthritis, so I am covered in the "itis" department. No big deal. Rehab, medicine, magic, whatever; I would just have to deal.  It was this Doc that is responsible for all this anyway. He told me to quit worrying about running and buy a bike. I did not own a bike so I bought a tri bike. (I wonder if I can take if off my taxes?)  The "itis" keeps me from doing hard intervals, which is a problem, will keep my runs slow, and breaks me down every once in a while when the music on the Ipod gets the best of me, but I can run, something I never even wanted to do before, but now love.  Pain hurts me but at the end of the day it is, after all, only pain.

The Athens tri has been around a while and has some history.  Lance Armstrong set the course record way back in the day and it will probably stand forever.  It also has a reputation for being cold and people constantly gripe about the chip seal on the bike course.  It is a measly 300 meter swim, pretty common for pool swims, 13.9 mile bike, and a 5k run.  Standard stuff for sprint. This event just happened to take place at my pool, on a bike course I knew well, and on a run course I had run dozens of times. It was my gym.  I was on my home field. I knew most of the volunteers and several competitors.  It all started the night before with a free carbo dinner at one of the local churches.  It was good food and fellowship.  I met another pastor who was competing, and I won the grand door prize, a really nice Under Armour track bag.  It was already all good.

After a week of very nice weather, a cold front blew in. Temps were in the 40s, it was raining a little, and there was a 30 mph North wind.  Not horrible, but not great either.

The race started on time with bib number one hitting the water.  It was a staggered, zigzag swim with each participant hitting the water a few seconds after the last in bib order. I was 140 and waited in line for my turn.  I hit the water, swam a lap, ducked under the rope, rinse and repeat. In two laps I caught the guy in front of me, who had caught the guy in front of him, who had caught the chick in front of him, it was a real back up and pretty frustrating.  There was no passing four or five people with others coming down the other side of the lane. I finally made it to the end finishing almost a minute faster than the three people in front of me (6:56).  The swim was alright but I should have finished a little faster. 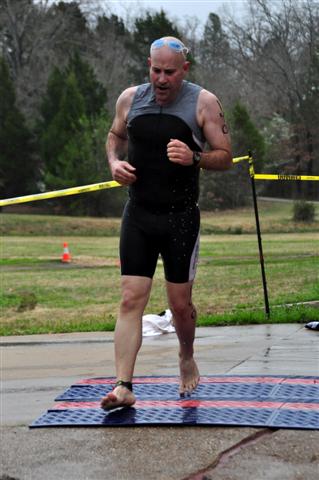 Onto my first transition: The time was comical -- more than four minutes (T1 4:01). I figured I must have taken a nap but later found it was because I toweled nearly dry. I decided not to towel off in the future.  I have not figured out how to run in bike shoes.  I either have the wrong shoes, cleats, or just need some instruction.  I decided to attach my shoes to my bike and put them on on the road. Lots of athletes do this. I was told I was nuts to try it the first time.  It really was no big deal.  I was out and on the bike.  For the first kilometer I was hauling the mail.  It was going very well until I heard that sicking sound of aluminum on pavement.  I had a flat.  I jumped off, changed it, and got back on my way.  I did not time it, but it took at least ten and as many as fifteen minutes.  Leaning over the bike made my back hurt and then I turned into that wind.  I was demoralized and I had serious doubts of even finishing.  I figured I would just keep spinning until I couldn't do it any more. 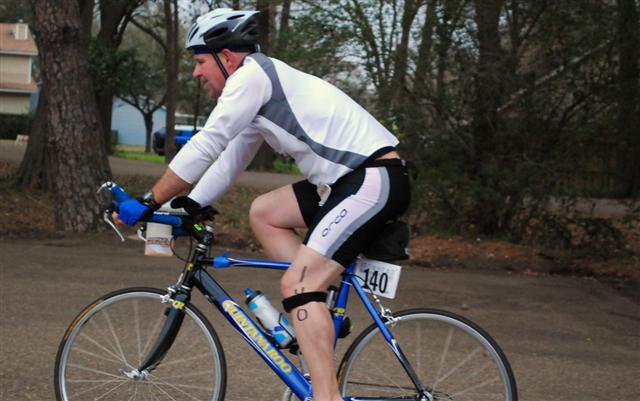 One kilometer turned into two, I came to the end of the chip seal,  then five kilometers, and pretty soon I was at the turn around.  At the turn around is the worst hill on the course. I had learned to dread it.  Because it is at the turn around you can not use momentum from the down hill to get you back up. A 30 mph tail wind is handy in such circumstances; it blew me right up that hill. I was hauling the mail again and about halfway home.  When I was on the other side of the road riding into the wind people from the other side kept yelling across the street to keep going. I was now the one yelling. It was a quicker trip back to transition (Bike 1:01:31)and I did a little better getting out on the run (T2 2:08).

The run was slow.  The Sunday before I had run some intervals and yanked the tendons in my knee. It hurt bad enough that I did not run at all that week, opting instead to replace run workouts with bike workouts.  I was feeling better but knew I had to take it easy.  I ran very slowly and when my knee began to hurt I walked it off and got going again.  My best time on this course on a better knee was a slow 27:47, this 5k was a full six minutes slower (run 34:24).  But I was finished with my first Tri. 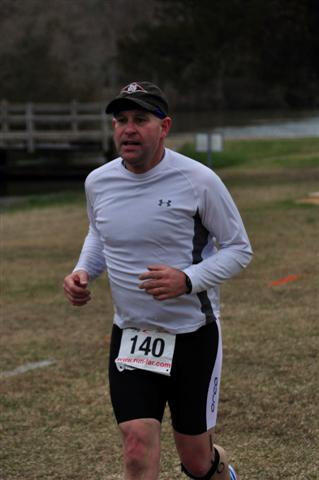 On March 5th  the previous year I was struggling to do 20 minutes on the treadmill and weighed more than 60 pounds more.  I would have liked to have done better, but better will come.  Next year my time should reflect the fact that the year before I was struggling just to finish the bike.

To recap: On August the 4th I stepped out the house for my first run, on the 30th I went to the Doc to see if he could stop the pain in my knee or put me out of my misery, 8 weeks of rehab later I carefully began to run.  By September 3rd I had a bike and began riding again, after a long hiatus. In November I joined the gym and began to swim after a 25-year hiatus.

So, when you factor in 7 months of training, I think that is not too bad, and it should only get better.  Even if it does not, it is well worth it just to compete with all these fine people. My first Tri was done, my goals were to finish and stay out of the medical tent, done, and now I had three weeks to get ready for the Olympic I signed up for in my cockiness, but that is another story.