At 66 years old, I completed my first sprint triathlon!

I witnessed my first triathlon when I cheered on my daughter in her first sprint tri after she had lost 50 pounds.

It was the Irongirl in Columbia, Md., which was limited to women only. Watching the triathlon was such a revelation to me, as I had always thought of tris being run by young, physically fit people. Here I was seeing young, old, fit, and really not-fit people all doing their best and being cheered on regardless of their ability.

It was a fantastic experience but nothing that I thought applied to me, until after I had my total hip replacement. I immediately bought an inexpensive hybrid bike so I could go faster than a slow, limping, walk. As I became more active a friend and I talked about doing the relay part of the triathlon, with me doing the bike portion.

There happened to be a women's-only tri occuring the next summer, so we entered. Although we were very slow, we finished. It was there that I realized  maybe I could do this alone, as there were a lot of (again) atypical athletes who finished. So the following year I entered for the full race.

It was limited to 800 women and sold out (online) in eight minutes, which shows what the interest is in races of this type!

Unfortunately in the intervening weeks, I experienced mutiple episodes of infections and a compromised immune system so I was hesitant to go to a pool or gym to workout; nor was I going to work out very hard and take the chance of slipping back. So I did a little exercise at home, and when the weather allowed, I started short bike rides outside. I also walked, and in June I started swimming.

I have never had a swim lesson, so this was a real challenge. On top of that I didn't have anyone to consistently swim with, so I ended up going by myself to a local lake. I tried to judge what a third of a mile would be like but after going to a swim clinic sponsored by the race, I found that it was not long enough.

Now I was starting to panic a bit, so I upped my swims to at least twice a week.

I did keep down breakfast, but my anxiety was sky high.

My daughter tried to distract me, calm me down, make sure I had everything, drank lots of water, etc.

I thought I was doing OK until I saw that our swim wave was next to the last. I had thought that being of an older age, we would start near the beginning and have more time to finish. So I was starting to hyperventilate. Then the wind picked up and waves started in the cove, by now I was feeling a little sick but didn't think I could back out. 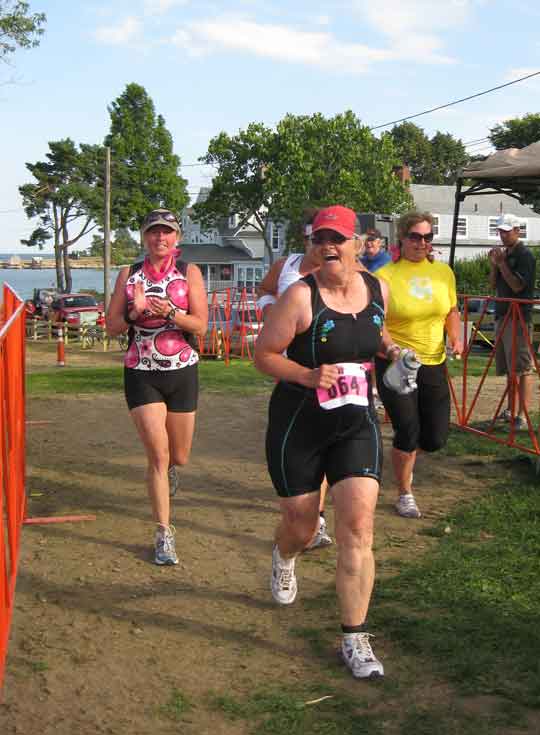 It was time for my wave to go, and my legs got me down to the water, and in I went, making sure I was in the back, out of everyone's way.

I started out slow and kept an even pace and pretty soon I passed a few swimmers! That was fantastic! Then I rounded the first buoy and headed for the second. I still felt OK, and I rounded the third and knew I wasn't going to drown. Not only that, but I was going to finish the swim. Piece of cake!

The bike was by now fun because I knew I could do that. I enjoyed talking to the spectators. (You can do this when you aren't flying by them.)  The majority went nuts when they saw someone older trying this and I hope I was an inspiration to someone on the sideline to try it the next year.

Once I got off the bike my legs were very wobbly so I walked and walked. Every time I tried to jog, my legs said, "I don't think so." As I was coming into the finish area, a friend came down and ran along beside me on the sidelines and yelled to the spectators, "This is my friend Priscilla and this is her first triathlon!" so you can imagine the support I had.

It was one of the highlights of my life and I try to inject in most conversations that I am a triathlete, you know!