They don't give medals for not puking

In November of 2010 I looked at myself and said "Dude, you need to get back in shape."

My wife is a great cook and I'm a great eater!  My goal was to lose 22 pounds and get back to my peak college weight.  However, the thought of going to the gym just to lift weights and probably injure myself (again) was not appealing.  Therefore, I decided to start training for my first sprint triathlon.

I am NOT a runner and the mere thought of getting on the treadmill made me want to puke.  I started slowly, just get on the treadmill for 20 minutes, and mix jogging and walking.  After my first half-mile jog, I thought my head was going to pop off!  Things started out very slowly in training, but then I started reading as many articles as possible to help guide me in my training.

I didn't even have a bike.  I was not sure how I would like triathlons, so I bought a nice Dual Sport bike about two months before the tri that I put some aero bars and street tires on.  I also put a nice computer on so that I could check my cadence and speed, as that's how I was riding on the trainers at the gym.

I was never on the swim team, but swimming in the pool came very naturally and I was much stronger than I thought I would be!  Also, spending summers "up north" and swimming in a lake gave me some confidence.

Three weeks before the race, I headed out to do my first open water swim, brimming with confidence as my endurance and pace in the pool has been great!  I got in the water, and it was cool. I put my face in the water and started out ... and I freaked.  Not being able to see where I was going, not knowing the depth of the water I was in, and being cold was a complete shock to my system.  I got out of the water completely dejected and thought to myself, "You're gonna get killed out there."

Fortunately, an Ironman at my gym said, "Get a wetsuit and you'll be fine." He was right. More on his input in a bit.

I had the opportunity to drive the bike course and actually run the run course a couple of times before the event, so I was ready.  The day before, I attended the course talk, picked up my bag, got marked, and racked my bike.  Security was out all night watching the bikes so all you had to do was show up on Sunday.

I woke up at 3:45 a.m. surprisingly well-rested.  I ate a PowerBar, had a cup of coffee and some water and off I went.  We couldn't have asked for a more perfect day for a tri.  Clear skies, 70s, no wind.  I made sure my computer on my bike was set, helmet and sunglasses ready, and socks and shoes laid out.  (I rode with my running shoes and straps on the pedals.)

I put my jersey on under my wetsuit (another recommendation from the Ironman buddy of mine) and strode over to the start to watch the early waves go off.  My wave was third-to-last.  My parents, wife, and kids showed up about 45 minutes before my wave and it really felt good to see and hear them at the start... They wished me luck and I replied with a "Thank you! Hope I finish and don't puke!" Feeling strong and reassured wearing a wetsuit, I made my way to the front line for the swim.  I checked my watch and hit start as soon as the horn sounded.  I ran into the water, hit it well and started swimming.

After my first four strokes and guy came over the top and dunked me, that pushed me off my line and I swam into on-coming traffic.  With the turbulence from the returning swimmers I swallowed what felt like a gallon of water.  Just after that, my watched peeled off and went to the bottom of the lake.

At this point, I'm 100 meters into the swim and I can feel myself hyperventilating.  I did not want to stop, so I did the unthinkable and rolled to my back - which was the best thing I could have done.  I was able to see that I was ahead of the pack and there was no traffic.  I took a few deep, calm breaths and told myself to just focus on my stroke and get to the turn around buoy.  I did just that.  I made the turn, saw what was ahead of me, put my head down and swam strong.  (I actually finished third in my group and 12th overall on the swim.) I hit the beach, peeled off my cap, goggles and suit and made it to my bike.  Having my jersey on already saved me a ton of time in transition and I hit the pavement quickly.  A couple miles into the ride a felt a little twinge in left quad - something I never experienced.  I down shifted a gear and rode a little higher cadence and the twinge went away.  I then settled into the ride and noticed that I was passing a lot of people.  I was only passed by guys on time trial bikes.

I made it to the second transition and was feeling pretty good, until I got off my bike.  Now, I had done bricks outside and at the gym and thought I was prepared.  I can't write the words I muttered to myself when I got off the bike, but my legs felt like I had 100-pound sand bags attached to each of them.

I made it to the rack, racked the bike and dropped off my helmet and started the run.  It turns out, I had the fastest T2 of the event.  My wife and kids were at the transition and I could see and hear them cheering me on.  I shot a brief wave and smile and out I ran.

As soon as I hit the run course, another guy goes flying by me and I had to tell myself to just go at my own pace and finish the run without walking.  Halfway through the run, I was all by myself and there were no spectators - the one moment I thought about slowing to a walk.  I told myself, "Just get to the turn and you'll be able to finish this run."  I did just that.  It's probably a Godsend that I lost my watch because I would paced myself much slower.  I actually ended up running the fastest 5K I had ever run! 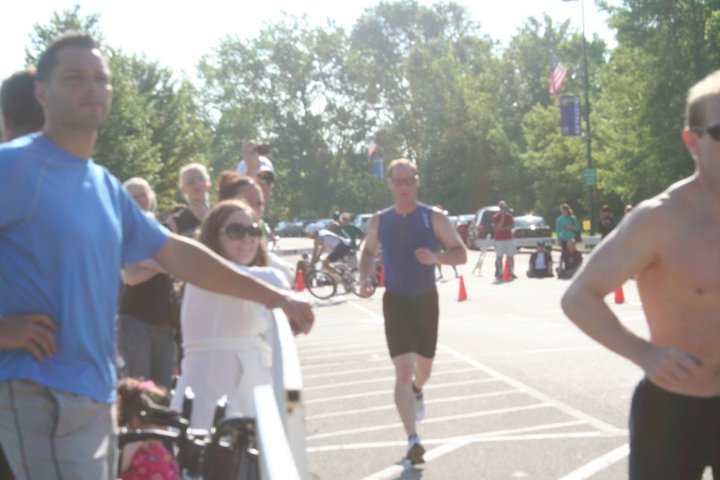 I crossed the line, not knowing my time but feeling pretty good.  After meeting up with the family, drinking some water, and cooling off with an ice towel I noticed that some of the times were being posted.  My goal was to break 1:25:00.  When I didn't see my name up at the 1:20-1:25 mark I started to feel lousy.  So, just for the heck of it, I started at the first page....about half way down I saw my name!  Just under 1:15:00.  As it turns out, I had a top-10 finish in my wave and finished in the top 10 percent for the entire event!  The joy I felt, I hadn't experienced in a long time.  I shared the good news with the family and I was asked if I was going to get a medal.

My wife cracked, "Do you get a medal for NOT puking?!" I think we all know the answer to that.

In summary, the triathlon was excellent.  I'm in the best shape of my life and looking at doing an Olympic tri in the near future.  Also, the wetsuit was critical in my success.  For any new triathlete I would highly recommend a wetsuit unless you are swimming in an area where you can easily stand.  It kept me warm, buoyant, and fast, but most important of all confident.

Thanks for listening and good luck!