Deciding on an Ironman as my first venture into triathlon was greeted with incredulity and astonishment combined with a hint of, "well, you're full of yourself aren't you?" and, "a bit ambitious?"

Deciding on an Ironman as my first venture into triathlon was greeted with incredulity and astonishment combined with a hint of, "well, you're full of yourself aren't you?" and, "a bit ambitious?" I didn't make a big spectacle out of my decision and kept it very much to myself, especially after these initial reactions started sowing gargantuan seeds of doubts into my mind.

Turning back was however not an option as I had already signed up for Lake Placid and once I commit, that's that.

I have a background in many half and full marathons back in my native England and have undertaken the odd Etape de Tour or three, a Raid Pyrenean and I am a regular club rider in Westchester, my new home. Surely then all I had to do was sort the swimming out...I thought.

The swimming, as it turned out, was to provide a much greater obstacle than I thought. I signed up for a continuing swimmer's program at my local Y, after all I could already swim, couldn't I ? Well apparently not! Two laps of the pool left me utterly exhausted and deflated, literally, as I gasped for breath while clinging onto the pool-side for dear life. Sheer perseverance, dogged determination and stubbornness saw me progress from this unholy eye opener to a slow but determined trawler who ploughed the lanes in an awkward one sided breathing interpretation of freestyle. Still, my target of 2.4 miles or 152 laps was now getting closer and more realistic.

A table leaf dropped on my foot in February resulted in a broken big toe and called a temporary six week halt of my haphazard training plan, such that it was. Adapt and overcome became my mantra as sessions on my spinning bike replaced runs and while I was still able to swim, my slow pace literally became a crawl.

Family visits from England as well as my own growing impatience with crowded lanes at the Y put serious dents into my already spartan swimming schedule and I didn't manage to swim the full distance, something that haunted the far reaches of my self belief right up to the start of the race itself.

The bike, I thought, would take care of itself with my Saturday club ride but then again, the long winter and fifty to sixty mile rides left me wondering if I hadn't approached this aspect of training with far too much of a cavalier attitude. Sunday rides were incorporated beginning May and while distance rarely moved past fifty five miles I now felt a little more at ease with tackling the full Iron distance, albeit without the benefit of drafting.

Increasing knee discomfort was also threatening to throw a very large and painful spanner into the works and after completing a somewhat lopsided thirteen miler in the rain of a soggy, foggy May afternoon I took the decision that all runs would now be undertaken on the comfort of the treadmills of the aforementioned local Y. Boring, undoubtably, but so much better on the knees.

Inexorably the days turned to weeks then into July and before I knew it my wife and I were packed and on our five hour drive to Lake Placid. On arrival we dropped our bags at the hotel and took an immediate walk down to Mirror Lake. Upon seeing all the swimmers on the course I returned quickly to our room and retrieved my wetsuit and set off for a lap, half distance. This somewhat helped to settle my nerves but still lingering there was the knowledge that I hadn't yet done the full distance. For the next two days my mind played havoc with my confidence, presenting me with situation after situation and hopes and fears were doing back flips in my stomach as I gazed out at every chance at the swim course wondering if it were in fact possible.

Soon enough I was standing chest deep as the National Anthem played and before I knew it I was thrust into the maelstrom and carnage that is the first ten minutes of a mass Iron start. Sighting, I thought, shouldn't be a problem, should it? Follow the pack. Well this far back and wide out there were people going every which way, some of whom, I found out later, were just trying to escape the main pack that was determined on following the sacred buoy line and taking no prisoners in the process. My course was zig-zagged and awry.

Slow as I was, I gradually found myself in my own exclusive piece of Mirror Lake real estate and emerged practically alone onto the beach to start the second lap. All fears about not completing the distance were now long gone in the excitement of the day and I just resolved myself to get through at my own steady plod. I even found the holy grail of the line and managed to follow it around unscathed for the whole lap, emerging a relieved one hour forty after the gun had sounded. At least I got a decent photograph, all to myself!

I walked transition, after all I was so far behind that a few minutes weren't going to make that much difference anyway and I emerged ten minutes later onto the more familiar territory of the bike. The main concerns now became pacing, hydration and nutrition and the distance would take care of itself. The relief of completing the swim carried me more or less through the first lap as did the spectacular scenery.

Before I knew it, I was off the bike and running shoes and a change of shorts saw me head out, albeit on unsteady legs, onto the run course. I knew there was no way of getting near my stand alone marathon times and decided on a strategy of ten minute mile pace for which I was determined to run the whole course, with the odd walk to pick up a cup of pretzels and a piece of orange etc. After about five miles my legs decided to cooperate with this strategy and were gracious enough to play their part, though they did rebel and reduce me to a walk up that last, nasty little climb onto Main Street on the second lap.

I did it though and even saw my wife waiting right on the final corner on the approach to the finish chute which produced, from goodness knows where, a heroic final sprint and charge for the line. (More to get a good solo finish photo than anything else!)

I had hoped for a time somewhere under the thirteen hour mark but without any prior triathlon experience behind me this was pure speculation.

The swim turned out to be one hour forty, the bike six fifty-nine and the marathon four hours twenty-five with twenty odd minutes spent in transition. Thirteen twenty-nine in total. Good enough for a first attempt.

I have learned so much on the journey to the start line which was totally overshadowed by what I learned during the race itself and I will be putting these lessons, hopefully, to good use in my next Ironman. (It was my wife's idea to sign up, not mine!)

I couldn't possibly leave without remarking on the venue and all the volunteers at Lake Placid. For a first time venue it was incredible and I feel will be hard to equal. It is so geared up for the event and the course itself is so spectator friendly that my wife, who has no interest in sport whatsoever had a brilliant day and managed to spot me numerous times throughout the day. The biggest thanks goes to her of course for the support she has given and her understanding.

The volunteers deserve their very own finisher's medals as they made a great day into something unearthly and unforgettable. Thank you.

For anyone thinking of undertaking an Ironman, my advice is go, do it, don't look for excuses not to do it. Look for ways in which you can do it. Don't put it off forever, before you know it will have passed you by. This is one experience in sport you do not want to miss out on. 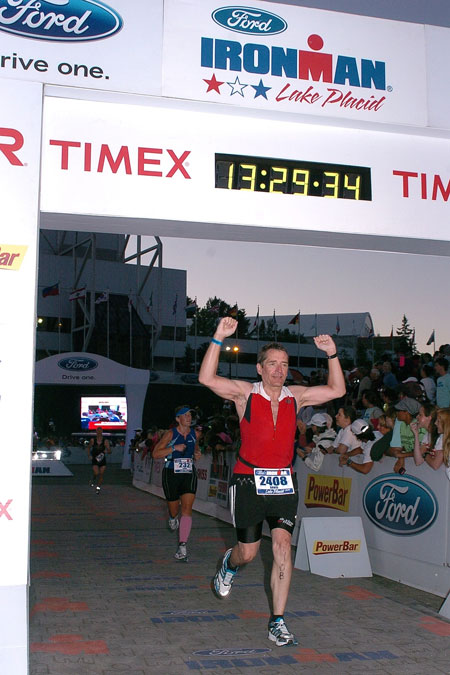