This was it, my first triathlon and it was starting with my favorite activity of the three. But I soon pulled my shoulder muscle during the first 100 meters of the 1000 meter swim!

My first triathlon is the only physical competition I have ever entered in my 52 years of life. I have always preferred recreational exercise that does not involve anything other than friendly competition over short sprints.  The triathlon was held in Goderich, Ontario on Sunday, August 14th, 2011 and was comprised of a 1 km swim, 42.5 km bike ride and a 10 km run. Supporters were everywhere from friends and family to competitors that I had never met. As is typical, I just wanted to finish. My strength was supposed to be swimming since I trained to swim 2 to 3 km over the winter season. I started road cycling a year ago with friends in the area and continued training by doing spin classes, swimming and running at our local YMCA over the winter. Training for the run was my nemesis since I experience a lot of ankle pain whenever I run or walk especially if it is done off road. Physically, I was in the best shape I had been in since my twenties.

The registration was mailed in to the organizers three weeks prior to the event. The form required me to identify my age category and I was surprised that I was in the last one identified as “E”. My wife and principal supporter said that “E” stood for Elderly. I did not receive any confirmation of my registration so I was anxious about whether they had received my check. I imagined them not allowing me to compete after my long and arduous training journey. Consequently, I went to the early registration desk where my fears were allayed when they presented me with my number, safety pins and a water bottle. There were no instructions inside the bag but I was told to show up at the transition area with all my equipment.

I went home and got online to find out about this mysterious “Transition Area”. There is an enormous amount of strategy to this area but the bottom line was that I needed to get the sand off my feet after the run and get into my shoes as fast as possible for each event. I practiced putting my cycling shoes on and decided that a shoe horn would help along with a water pan to step in that would get the sand off after the swim. The only other thing I had to ensure was that my towel, cycling shorts, top, water and snacks were ready to go when I reached my bike. I decided to put my snacks in a ziplock bag to dig out during my cycle. I also put my MP3 player in a ziplock so that I could listen to Jethro Tull tell me I was “Thick as a Brick” while I ran.

Sleep was challenging that night but I did manage to stay in bed until 4 am. I got up on race day surprisingly calm and made a pot of coffee. As was advised, I ate my usual breakfast 3 hours prior to start time consiting of oatmeal, cranberries, almonds and walnuts with maple syrup and milk. I also had a couple of glasses of juice. The next step was to organize my equipment and go over a checklist that I prepared over several weeks based on advice and thoughts that I had about the triathlon. It included the usual equipment stuff as well as reminders to put on Vaseline to minimize rash, take off my cycling shorts prior to running and to eat and drink regularly during the cycle.

So, I arrived at the “Transition Area” a half hour prior to start time. I went to the registration area where they put numbers on my upper arm and calf along with the “E” on my calf. A friend of mine suggested that I pin the number on my riding shirt so the organizers could track my progress. I was wearing a full wetsuit that another friend had loaned me and I put on the light blue swim cap. I think they gave me a child’s cap because it felt like a vice on my head but I was told to wear it for safety.

Starting time was minutes away so I went down to my beloved Lake Huron to get ready for the 1 km swim. Behind me, beside me and in front of me were my clones of all ages and sizes. Some were laughing while others were very focused with expressions ranging from happy to angry to anxious. There was a countdown to the start time and then the horn blared.

I jogged into the water to an outside area where there were less swimmers and began my swim. This was it, my first triathlon and it was starting with my favorite activity of the three. I was merrily swimming along and getting bumped and jostled a bit and then I felt the most excruciating pain in my right shoulder that radiated from the pectoralis’s insertion to its origin. I had strained my shoulder muscle during the first 100 meters of the 1000 meter swim! My breathing accelerated and I inhaled most of the water in Lake Huron. Coughing and sputtering, I rolled over onto my back and used my good arm to do a back stroke. My mind was racing and I started to panic. I tried to think of calm thoughts and eventually got my breathing under control. Then I thought I must just be imagining the shoulder pain and could probably just swim through it. I went back into a front crawl and the pain was worse than ever so I went back to my one-arm backstroke with strong kicking.

Pain is not an unfamiliar sensation to me because of compound right ankle fractures, Strains, sprains and a ruptured right Achilles tendon that never reattached so I thought if I could finish the swim that cycling and running would be doable even if my arm hurt. Nonetheless, it is depressing to see all your blue capped competitors blast ahead of you while you struggle to get to the first of two buoys. The next most depressing thing is to see the advance of the next wave of yellow capped relay swimmers starting to pass you. The last depressing thing is to get asked by the lifeguard on the surfboard if you are okay. At least I gave her something to watch. But lets not forget the humiliating feeling of knowing that the Coast Guard Vessel and all of its trained men and women has slowed to within 20 meters of you and are watching to see if you go under.

The humiliation ended with me exiting the water with only a few swimmers left and as is typical, I laughed, shook my head at the irony of the situation and peeled off the wetsuit to get ready for the next event. My worried wife was relieved and confused but at least I finished. It was easy to find my bike because it was one of the few left in the transition area. I stepped in the pail of water and swished my feet, stepped out and put my socks on and quickly used the shoe horn to put on my cycling shoes. The irony of the time I was saving was not lost on me and I started laughing at the seconds I was saving after my swimming fiasco. 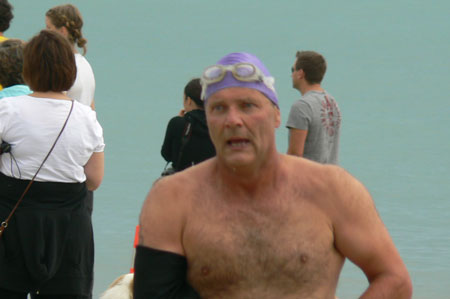 Undeterred, I clipped in and started up the first hill with the intention of blasting through my 42.5 km cycle.  After reaching the top of the hill I immediately started to drink liquid and then reached in my shirt for the date bars I had purchased. That was when I realized that the lock part of the ziplock really works. Eventually I ended up grabbing the whole bag and tearing it open with my teeth. I continued to consume water and date bars throughout the ride. Friends cheered me on during the ride and two even cycled alongside me for a while encouraging me on to the next event. My last refueling made me realize how much I detest date bars. I put the bar in my mouth and it felt like someone had placed a gooey, foul tasting, stinky sock into my being. I gagged and spit it out while grabbing a swig from my half-water half-Gatorade drink. This was the last problem I experienced and comfortably finished the cycle. 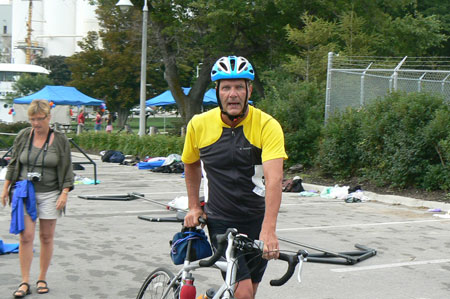 The final event was the 10 km run. I quickly transitioned into my running shoes again laughing at the meaning of 'quickly' and started on my run. I was cheered on by friends again and just when I was a half kilometer into the run the first place triathlete sprinted past me in the opposite direction. Sprinting was not something that I considered doing during a run. I was further surprised by the entire pack coming towards me that were also sprinting. It was at that moment that I realized I was not interested in achieving records in this or any other event. I pulled out my MP3 player and tuned in Jethro for the remainder of the run. Lots of runners I knew and did not know gave smiles and encouragement along the way. Crossing the finish line was elating. I accomplished another thing on my bucket list and was proud of the achievement. Family and friends are still sending congratulatory emails and phone calls.  It is amazing how many people care about the completion of a goal. I think there is a little piece of achievement for them as well when a relative or friend finishes a goal. It made me realize how connected the people of the world are and how transforming these events can be. Will I enter into another triathlon? I can give you a definite 'maybe' as a response.