No shame in being last

When I retired at age 67 and decided to fill some extra time by preparing for a triathlon, I ignored two facts: first, I had never learned to swim and, second, I hadn't been on a bicycle for over 30 years - and that last ride didn't end well.

It's four months later, and I just completed my first sprint tri on beautiful Captiva Island in Southwest Florida. This was the first Galloway Captiva Tri, with participants capped at 550. The event sold out five weeks early and was organized with impressive professionalism.

The weather was perfect in the early morning, warm but with unusually low humidity. The quarter mile swim was in the blue, calm waters of the Gulf of Mexico. Two weeks earlier, waves had been running at three to five feet with an undertow, so the conditions were a big relief. The race began at 7:09 am, just as the sun was rising. There were large orange buoys every 50 yards in the point to point swim, with the reassuring sight of kayaks between each buoy and boats hovering a little further out.

I swam slowly, having heard all the horror stories about getting kicked and swum over, but had little difficulty with the other swimmers. Women over 45 were in the first wave, which probably helped my comfort level. There was a brief but fairly steep climb up the beach to the transition area. T1 was slow, in part because I didn't have tri clothing and was trying to get some of the water off my Speedo bathing suit to put on running shorts and a tank top. I wrestled my bike off the rack after donning all the appropriate gear and took off.

A word about my bike. Because of my fear of biking after my last disastrous riding experience, I had bought a used Trek Pure Sport hybrid when I started my training. I could sit upright and it was very stable. My husband called it my geezer bike, but it got me to love riding again. It's a heavy bike and not built for speed, but neither am I, so we were a good fit.

Off I went along Captiva Road with its breathtaking views of the water, for the 10-mile out and back trip. I was in a bit of a panic because I knew they were going to sweep the bike course at 8:15 to re-open the road, so I rode faster than my fitness and skill level warranted. The second five miles lasted forever, as almost everyone passed me and as hard as I tried, I rode slower and slower. I made it back to T2, but the sharp-eyed volunteers took a look at me and called the EMTs. After a 15 minute T2, and fluids, ice, blood pressure checks and questions about what year it was, I insisted on continuing to the run. Reluctantly, they let me go.

The run was a 5k, with two loops around a lush, beachfront golf course. The tail end of the triathletes were finishing their second loop as I started my first. I decided a fast walk was the best I could do, and I was joined periodically by the EMTs on bicycles, checking up on me, and the wonderful race director who came along on the back of the second loop to cheer me on.

I crossed the finish line last, but knowing how deep I had to reach to get to that point made me feel like a winner. However, next time, I'm planning to leave the honor of last to someone else. 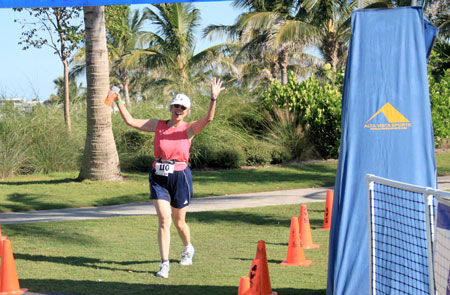