My Year to Tri

How triathlon helped me become the person I wanted to be

In the fall of 2010 I was 180lbs.  I couldn't run for more than a minute at a time, I hadn't been on a bike since I was in college and I had a fear bordering on phobia of the water.  I was also single for the first time in my adult life.  I needed a project to keep me busy, an accomplishment to be proud of, and a way to become the person I had always hoped to be.  I wanted to finish a sprint distance triathlon in 2011.

In typical type-A fashion, I began to look for a personal trainer.  The first two people I talked to actually turned me away!  They said it "took a special person to do triathlon."  I ended up finding a fantastic trainer who guided me through every aspect from nutrition, to strength training and, of course, running, biking, and most of all swimming.

In June we began open water training.  I had never been in open water ... never!  Not a lake, not the ocean, not a tide pool, not even on a boat.  I was back to puking, hyperventilating and crying all over again.  We started at a local swim beach and I swam along the ropes, close enough to touch, for a long time.  Since our local lap pool wasn't deep enough to tread water, we went to a local rec center and I learned to tread water in a busy pool full of splashing children (excellent triathlon simulation). Again, with time came confidence (the wetsuit helped a ton) and I began to swim farther and farther from that rope.

We picked the Rattlesnake Triathlon at the Aurora Reservoir for my first triathlon (it had the shortest open water swim) and planned out a series of duathlons and aquathons as preparation.  As it turned out, I'm actually quite strong on the bike and the added confidence of that was huge!  My first aquathon, I was so scared of the other people, I was the last one in and the last one out of the water (the volunteers in the kayaks stalking me, just in case) but I came out of that water with a sense of accomplishment I had never felt before!

I did my first triathlon in August and had a fantastic time!  I did my second one a month later at the Oktoberfest Triathlon in Longmont, CO.  For the first time, I actually enjoyed that swim!  I felt confident and comfortable in the water.  I honestly thought the event would be a more emotional experience, because I had played out each piece so many times in training, and visualized crossing that finish line so many times.  But the event itself felt like a celebration!  My mind was clear, quiet, and focused and I felt happy!  Right where I belonged.  It felt like a celebration of self, of who I'd become with the world cheering me on.

Over the last year, this training has been an ideal ground for my healing and self discovery.  I had faced my fears, my self doubt and come out a better person for it!  I am 40lbs lighter, I can run a solid 5k, go fast on the bike, and I am finally comfortable in the water.  Most importantly I am happier than I can ever remember being and triathlon has been a huge part of that! 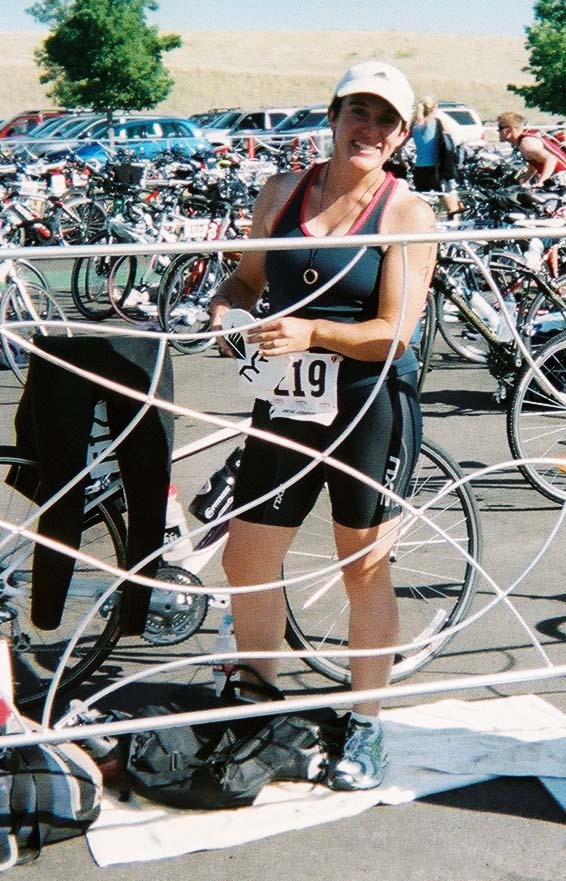