What would the uninitiated make of all of our gear? 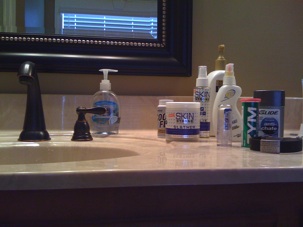 If someone who didn’t know you and who knew nothing of endurance sport wandered into your home and looked around, would they understand the things they would find?

I thought of that the other day as I walked through my bathroom and noticed a collection of products next to my sink that would be completely foreign to the uninitiated.  It caused me to wonder about other sights that one would only see at the home of an endurance athlete. 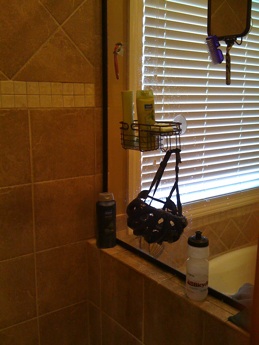 A great tip for keeping one’s helmet from stinking is to simply take it into the shower with you.  I put mine in the floor of the shower on my way into the bathroom after a ride and let the water run over it while I get the temperature set.  Occasionally I put the helmet on after I get the shampoo lathered up good.  Consequently, my helmet never stinks even after years of use.  This Giro Atmos has been through two summers and looks and smells like new.  I usually leave my sunglasses in there too, keeping the salt build up from eating away at the frame finish.

The shower is also great place to have a recovery drink. There's no reason to wait until after a shower to reload or to guzzle 12 ounces of fluid. Triathletes must be efficient users of time. 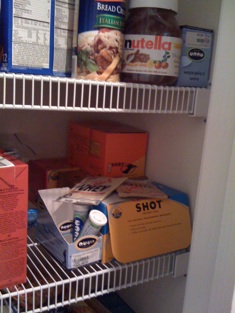 To be sure, Nutella should be a staple in everyone's pantry. I think much of the other stuff in this picture would be confusing to most folks. I wonder if we just left out some Clif Shots at breakfast, would it end up on toast?

Not that I really can, but I try to take myself out of the equation and look at this stuff for what it is, I suppose I'd mostly wonder why there is so much of it? Really, there are 30-40 Clif Shots and 10 tubes of Nuun in this picture.

If you buy your Nutella at a regular grocery store, you may see that my jar is much bigger than usual. I buy the industrial size in the handy two pack from Costco. I'll put that stuff on just about anything. My wife even found me some in single packs in case I need to take some on a ride. 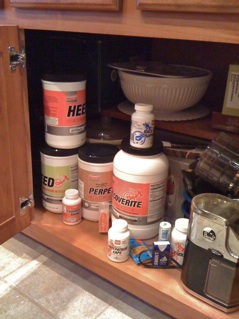 Bottles of pills and buckets of fine powdery substances? I guess that isn't too far off of center. Most people have vitamins and kool-aid in the pantry.

You can't see it in this picture as it is obscured by the coffee grinder but there is usually a ziplock bag containing two scoops of Hammer Nutrition's HEED or Perpetuem laying down there too. I take two or three bags with me on long rides but usually don't use all of them so the left overs wait there until the next weekend. I'd be willing to bet the white powdery substance rolled up in a plastic baggy would get the most attention if my neighbors opened this particular cabinet. 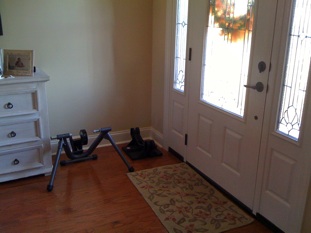 That's a crazy looking door stop. This may seem like an odd place to keep a trainer but it makes sense. One can warm up and then roll right out the front door on a cool day. Conversely, it's also ready for a cool down spin after an interval day. Of course everyone keeps the EZ Bike Stand handy for airing up the tires and loading the water bottles before a ride, right? Also, the piece of furniture to the left is one of two storage units I use to stash the assorted extra pieces and parts I keep on hand. This one has new tires, carbon bottle cages, Body Glide, bar tape, my favorite type of steerer tube compression plugs, two fuel belts and an assortment of flasks. What would the nosey neighbors make of that stuff? 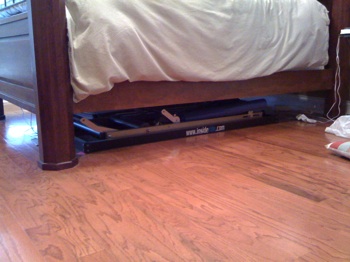 In winters past, I've left my eMotion rollers in the living room. Oddly, the other members of my family find it cumbersome to walk around them for three months. I've been asked to leave them under the bed when not in use. Of course that means I haven't been using them as much. After tense negotiations, I'll now be able to leave them out in the dining room after the Christmas holiday season. If you didn't know what it was, what would you make of this strange device stored in the bedroom? 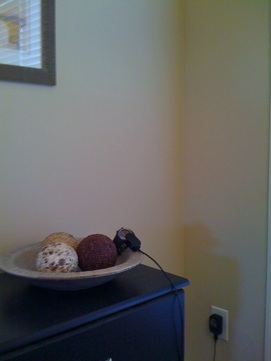 Here's a subtle, decorative accent piece. That pretty bowl easily holds my Garmin while it recharges. Depending on the day, one might see the Forerunner 405 in this picture or the Edge 705 I use on the bike. When not in use, the chargers store nicely in that piece of furniture along with cycling and running socks, off season clothing, assorted zip ties, reflective tape, running hats and a few tools for repairs and adjustments that can't wait for me to get out into the garage*. It's as good a use of a breakfast nook that I've ever seen.

*my garage is another story - work benches/stands, tools, parts, degreasers, lubes, wheels, bikes but only one car where two should fit. 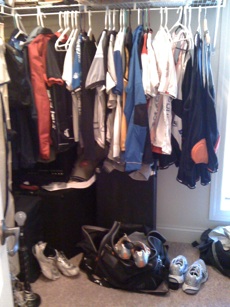 Bib shorts, one piece tri suits, mesh under shirts, spandex at every turn and those funny shoes. There is plenty in this closet to throw the uninformed for a loop before they ever even peek in gear bags on the floor.

There's a small PA system in there too. Am I a triathlete or a musician from the 1980's who can't let go off his spandex stage apparel or the most righteous music ever to pierce an ear drum? Hair Metal Rules!