A Husbands Point of View

This is an article about my experience as a husband of a triathlete, while she trained for the Orangeman Triathlon

Recently I become the husband of an Ironman.  Okay, so I don't get in any trouble, I technically became the husband of a 1/2 Ironman - but in this case, she's a woman...so how does that work exactly?  I'm still very new, green, and learning the vernacular used by this sports elite.  My wife, Stacey, has set me straight time and time again, and made sure that I NEVER misuse a term like Ironman in front of the team, which consists of men and women who are "actual Ironman O.G.'s".  My wife trained for several years with a local triathlon team in Orange County, CA.  After going about as far as the large group training platform could take her, she followed in the knowing footsteps of several of her teammates and moved onward and upward to a more advanced and focused triathlon team in O.C.  After she joined an Ironman and endurance athlete training team for Orange County Triathletes (FitnessCoaching.us), I soon realized that this was serious business. 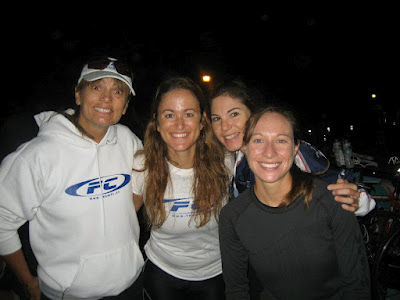 This team was coached specifically to race, and finish, only half Ironman and Iron distance races.   I have to say, that the situation was unlike anything I remember her participating in previously.  Instead of her heading out in the early dawn hours to swim and run for a couple of hours, twice a week, and mostly hang out with friends who gave her a ton of much needed support, she now had a ultra-specific Iron distance training regimen that was provided to her by Team FC coach, Joby Gutierrez...or "Joby" as he is known - much like a Brazilian soccer star, by only one name.  Joby, had given her a plan that upon first glance, did nothing short of make my head spin!  It included every single movement, heart rate, timeline, and instructional guidance I had ever known was possible, and many that I had never known were possible.  Since when did triathlon training in Orange County, CA become so scientific?

My wife was completely unsure if she could do it.  Even going so far as asking Joby to put her through tests to see if she could possibly compete in a 1/2 Iron distance race that was only 14 weeks away.  To me, it all seemed like a total guess.  I mean, an athletes ability to successfully train for a huge race like this could not possibly be known by data collected from an initial workout, right?  Especially considering this initial fitness level was to be marked after she had been "on the couch" so to speak, for months!  I laughed to myself, in disbelief, and kept my opinions right where they belonged...in my head ONLY!

My wife is not an "athlete".....at least I had never seen the "athlete" in her in 9 years of knowing her, so while I hoped she would be able to do the race she was so excited to train for, I had honest concerns.  In any case, after the fitness evaluation, Joby told her that it was "possible", but that she'd have to follow the plan exactly.  She agreed.  Little did I know that this would be the end of normalcy in our life for the next 14 weeks!

What I witnessed was nothing short of incredible.  My wife was actually training for a 1/2 Iron race!  How impressed was I when I saw her come home from a 45 mile ride, and go directly to the computer to download her stats from her Garmin?  Then, to see that her triathlon coaching platform even told her what heart rate she should be at during her training rides, and to see that it was keeping right with the levels her triathlon coach had estimated it would be at was simply inconceivable.

Eventually my wife was doing 65 mile rides, capped off with 8 mile runs with her fellow teammates! She even kept to her training plan when we were on vacation in Las Vegas!  She had a 9 mile run to do?  No problem!  She just jogged around the motor home lot near our hotel for over 2 hours, in the hot Vegas sun!  I was never quite so proud as the day those white salt stains started appearing on her workout clothes, believe it or not.  As a husband, spectator, supportive couch potato, I was really getting in to it.  After all, I was sitting around every Saturday and Sunday for 6-8 hours waiting to see if she made it home, so it was pretty much all I could think about. :)

Race day came, and my wife was ready.  The crazy endurance fitness training plan, along with her coach, had given her everything she needed.  She finished the race with a smile on her face, and the most glorious white salt stains I had ever laid eyes on! I must say a HUGE thank-you to Joby, his wife Mia, and all the teammates of my wife.

Their team was nothing short of supportive, and enthusiastic the entire 47 hours (at least that's what if felt like) of the race.  If I'm not mistaken, every person that participated in the race, finished the race.  I have to admit though, the only one I was really watching, and was willing to hug after the race, was my incredibly inspirational wife.  WAY TO GO STACY!  I'll be proud...forever. 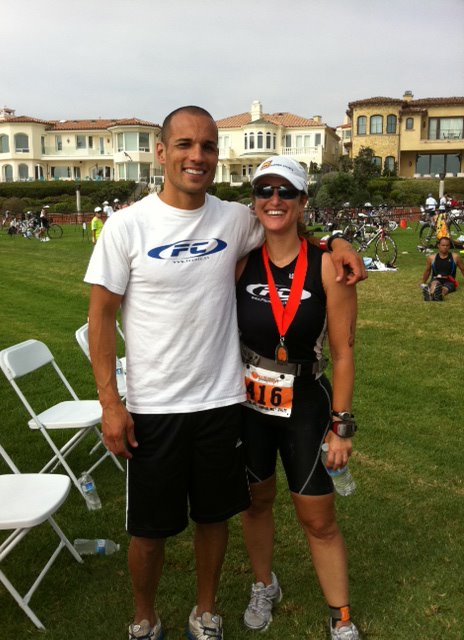