When they first came in, and I opened them up, I had my doubts. So, I made sure to really put them to the test. Well, Rudy, you've made a believer out of me.

Recently, I was given the opportunity by Beginner Triathlete to review the new-for-2012 Rudy Project Hypermask Sunglasses, in red.  I love these babies. 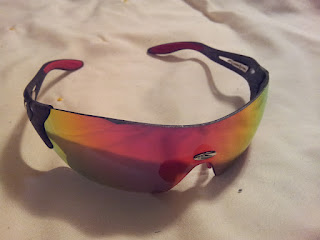 Pictures don't do these justice

When they first came in, and I opened them up, I had my doubts.  They're light, flexible, and seem like one good hard run would send them crumbling into the dust.  I found these glasses so light and comfortable that it would be easy to forget that these are on your face.  So, I made sure to really put them to the test.  Well, Rudy, you've made a believer out of me.

The sunglasses went on my face, and well, fit perfectly.  I hadn't expected that because I have a small face.  They survived me looking down, and didn't fall off my face at all.  They even survived me shaking my head violently side-to-side in an attempt to get them to come off. They stuck like glue.  As far as athletes go, I'm on the smaller end of the scale so we had my husband try them on next, because he's a larger athlete than most.  Big mistake.  At some point I'm likely to come home and find that he's repossessed them.

The next thing I noticed was that they sit pretty close to the eyes, sealing out most of the light. Further testing revealed that the only light that gets in is through a very narrow sliver at the top between your face and the glasses when you're wearing a helmet.  Most of the time this sliver of light is pretty unobtrusive.  If you're running and wearing a hat, nothing comes in at all.  During continued use of these, I was able to minimize, then eliminate that sliver of light entirely.  I tried these in various lighting conditions; bright sunlight, cloudy, twilight, raining, and even indoors.  I was happy with light transmission and contrast in all these conditions.  One thing that I haven't gotten to do yet is the mascara test - women, you know what I'm talking about.  But so far, without mascara, these do not touch my eyelashes.  A plus. 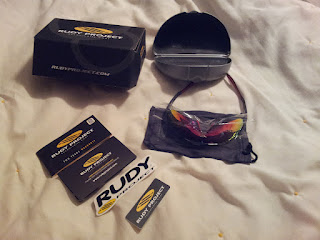 Appearance and Quality of Construction

The lenses are a sexy red on the outside.  On the inside, they're a graduated blue at the top to gray at the middle and bottom.   The frames are an ash gray, and the hinges are well hidden; I see it being very difficult for a screw to accidentally fall out of them. The only place that there are frames on these are the sides of the lenses, but this adds to the appeal.  There's no frame to block your field of view.  They're very flexible, but under extreme use, they don't break.  I had the opportunity to test these under crash circumstances, and the glasses fared better than I did.

The nose clips are flexible to adjust to your nose, but I found them a bit too flexible for my taste, and they got caught in my hair when I pushed the glasses up on my head.  Though after a few days, I figured out how to finesse this - it's no longer an issue.  What I'd like to see more adjustable is the temples.  The glasses seem to be made for a larger athlete, and if they were a little more adjustable at the ears, they wouldn't slide down my nose so much.

The sunglasses came in with a hard case, a soft case that doubles as a cleaning cloth, a warranty card and a manual, and some stickers (hooray stickers!). 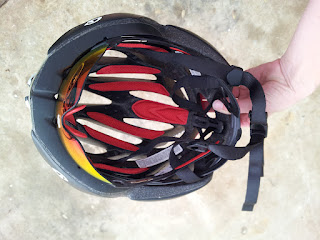 Profile of the glasses vs the bicycle helmet

In running and cycling, the sunglasses held up well, outperforming anything that I've worn in the past.  I didn't have a problem with them fogging up except at one stoplight, but they actually started to fog up, then stopped.  For cycling, I tested the glasses on the outside and the inside of the helmet strap.  These seem like they've specifically been designed to go on the outside of the helmet strap.

I've also had the opportunity to take these out in the rain several times.  They do fog up a bit when you're stopped.  Otherwise, the rain beads off, and when it dries, the water spots aren't obnoxiously hard to see through.

As previously mentioned, during unintentional crash testing, the glasses held up remarkably well.  They survived with a small scratch on the outside of the right lens, and I can barely see the scratch from the inside.

During running, they don't bounce, they don't slide, they just...were effortless.  They held up to several speed workouts, several runs where I pushed a heavy stroller with two kids (nicknamed Mayhem and Chaos), and several runs that were just easy runs.

These fit well.  My only complaint is that after running for a while, my ears get a bit sore from wearing these.  If there's a way to adjust this, I haven't figured it out yet.

I like the idea of having sunglasses that you don't have to think about.

Not into the red?  The lenses are interchangeable and replaceable, and they come in other colors with different color frames.  Purple, green, and gray. It was hard to decide which color I wanted to test!

I'm really a beginner to the quality sunglasses world.  So the thought of dropping $200 on a pair of sunglasses seems pretty tough.  But the reality is that Rudy has a lifetime guarantee on their lenses that is pretty amazing.  And the glasses came with everything I need to protect them when I'm not wearing the them.  So yeah, I consider these a good value.  Especially once you consider what I've put them through.

Verdict?  So far they rock.  I look forward to many a happy workout and race with these sunglasses.  I completed the Memorial Hermann Ironman 70.3 with these, and have to say they were a good choice. The glasses went on after the helmet in T1, T2 was a breeze with them, and I never had to think about them during the run.  I've got Ironman Texas coming up in the next month, and my assessment of these sunglasses is that they are the ideal sunglasses for an iron distance and half iron distance race.  The versatility under different lighting conditions and for cycling and running is perfect.  The need to put these on over helmet straps when cycling is a plus for triathletes under USAT rules, and sweat, grime and water don't really seem to mess with the ability to see through the lenses too much at all.

One thing I want to mention for triathletes, time trialers, and anyone else who spends a significant amount of time in the aero position: the field of view is huge, with no frame to obstruct your view.  As of the time of this review, the Hypermask did not have a set of clear lenses available on Rudy Project's website.  As much as I enjoy these glasses, this is a disadvantage for any who rides at night.

Texas summer is coming, and I want to really push these glasses to their limits.  I look forward to the training and racing with them, and I hope to see a pair of clear lenses available soon.