You could say I was an early bloomer. At eight years old I towered at 5'8" and had a unibrow that would make Peter Gallagher blush. Not only was I a physical outcast, but I was also just plain strange. I was obsessed with unicorns and would much rather curl up with young adult fantasy fiction than play outside with my peers. I had never learned how to ride a bike, not for lack of trying from my parents, so I spent many a summer making excuses like "I have a flat tire" or "My mom says I can't go out." My height deceived many at school and kids who didn't know me would often pick me for sports thinking my huge body would do some good on their team. But all too often they would realize that I was athletically inept and finally gave me orders like "Just stand in the corner out of the way and don't screw this up!" Eventually I started to get picked last with "sweat pants kid" and the other "rejects." My hatred for athletics began there. I was the last to finish a mile in PE, I would throw myself in front of dodge balls just so I could get out, and was a constant figure in the outfield. When I left for college I was programmed to believing that I was not an athlete and that I would never be.

This all changed on a trip to Europe with my father. He is an avid runner who at the age of 56 can count the days he has ran since he was 14. He invited me out on a jog to Hyde Park, and for some odd reason I accepted. It was amazing. The park was incredible. It still probably is the best run I have ever had. After that I was hooked. My father and I spent every day during our trip running. When I went back to Montana, where I was going to school, I continued this and became a runner.

My sophomore year of college, at the age of 19, I finally learned how to ride a bike. In the hippie town of my college, riding a bike was a necessity. I bought a bike from a local bike shop and when I was asked if I wanted to ride it to test it out. I declined because I hadn't ridden a bike since the mid 1990's. Turns out the bike was an 18" and was way too short for my now 5'11" frame, but I somehow managed it.

After college I began swimming for exercise at my local gym for fun but never considered it a big thing.

I met my, now, husband two years ago and we immediately connected over running. In our first couple of months together we trained for my first half marathon and his first full marathon. He became addicted to races and stumbled upon the idea of doing triathlons. I thought he was nuts. He became obsessed with the culture. Getting the gear, watching videos, obsessively researching online. He took me to a triathlon just to watch so he could study transitions. After watching the swim I was immediately taken by the sport. The community and the excitement of triathlons was just so captivating. After that race we went to our local tri shop and I bought a tri suit, wet suit, and new goggles. I signed up for a practice tri a mere three days away and a Sprint tri only three weeks after that. I did my first open water swim that day in the Columbia river... terrifying! I finished my first Sprint triathlon in just under 2 hours, but I finished!

Yesterday I just finished my fifth triathlon. The Portland all women's Wahine race. My husband was at the finish line cheering me on while I held hands with my friend who was completing her first triathlon. In September I will be doing my first Olympic tri, the Portland Triathlon (not to be outdone by my husband who is doing a half Ironman in Boulder on August 5th!).

I still may be too tall for my own good and have to keep those caterpillars I call eyebrows in check. I may not be the fastest in my age group, but I am a triathlete. Finishing counts, right? 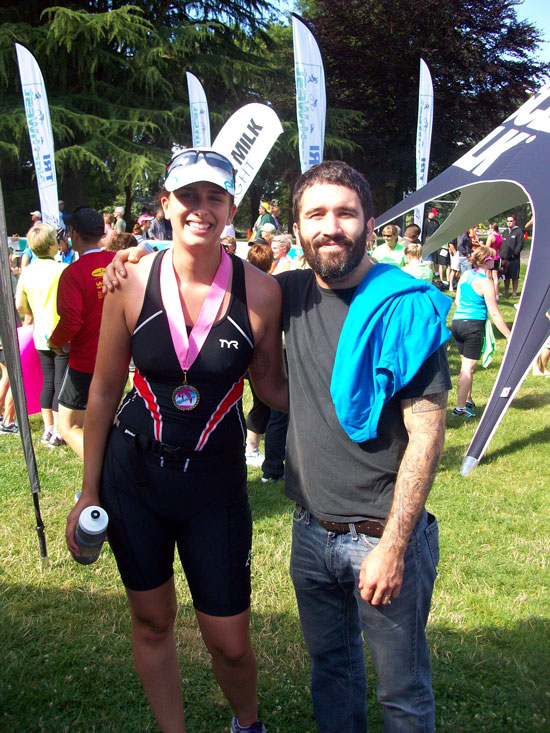 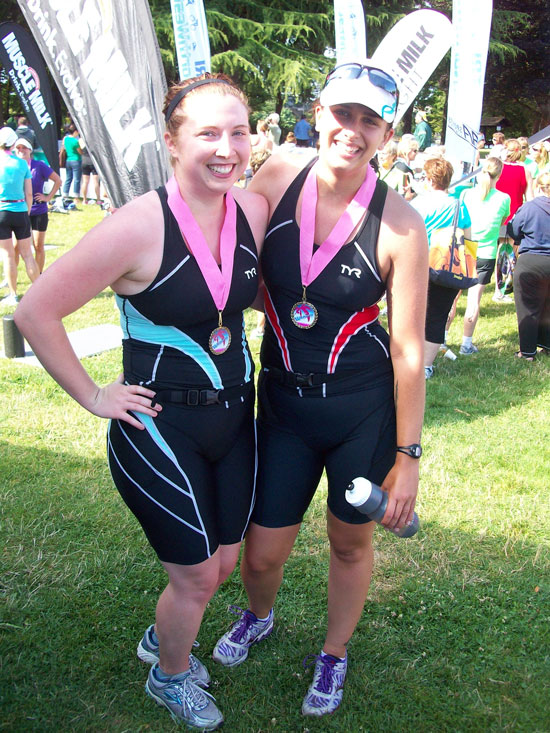