From Disbelief to Completion: My First Triathlon

When I was a teenager I used to ride 25 and 50 mile bike rides and go body surfing at the sunny beaches of San Diego.  In contrast I could barely run a mile in PE class due to side stitches and my knees and feet complaining.  Throughout my 20’s I was an inactive pack-a-day smoker figuring I would worry about my health "in my 30’s."  As my 30’s came around I was diagnosed with hypertension and needed to drop some weight so I quit smoking and started exercising at the gym.

Most of my gym workouts consisted of spin classes, elliptical machines, and cardio kickboxing.  All mostly low impact workouts that catered to my disdain for running while improving my overall cardiovascular health.  As I became more active I added lunchtime sports activities with co-workers including racquetball, sand volleyball, and flag football.  In addition, I got back out to the beach and I learned how to surf a long board, however, my endurance while paddling was very limited.  These new activities, included running, had brought to light a new pain in my right foot which gradually grew worse to the point where a brisk walk could be very painful.

Frustrated with the pain impacting my activities I went to a podiatrist and was diagnosed with a condition called, "Hallux rigidus." Basically my big toe could not flex upwards due to bone spurs.  The choice was a lifetime of orthotic footwear or surgery, the former not guaranteeing I would be able to continue an active lifestyle so I opted for surgery.  Three months of recovery later and I was able to walk (mostly) pain free!

As I progressed from recovery back into activities, I started doing a little bit of jogging and surprised myself with how well my legs and feet handled it.  This inspired me to push my boundaries and do a local charity 10k run.  With five months to train I smoothly progressed through the "Couch to 5k" program (excellent!) and a 5k to 10k training program.  The only hindrance was knee pain that would show up around the four mile mark

A knee brace helped me complete the 10k charity run however continued long distance running was in question.  Not wanting to give up on distance events I looked into swimming as a new challenge to improve my endurance while surfing.  What I found were sprint length triathlons, the 5k run is right in my pain free range, and there was a local race only two months away (Scott Tinley's Triathlon at Lopez Lake) giving me enough time to train up my swimming.

I woke up before the sun and drove to the lake to get there early enough to beat the rush and keep my nerves calm.  As the sun rose over the hills I walked from the parking area to the race start and transition area in a serene calmness before the proverbial storm.  Fortunately the staging area was not very crowded yet so I was able to get my spot all set up and mingle for a bit before my wave started.  As my wave gathered at the water line before the start a former co-worker came over and we chatted a bit.  It was his first "repeat" triathlon as he did it as his first event last year.  After a few words of encouragement we got ready to start!

At the sound of the horn we were off!  I kept to the back and side of the pack to avoid the melee however there was still some grabbing and kicking.  About 20 yards into the swim a hand came in contact with my left ankle and twisted my timing chip band.  The rest of the swim I was worried that it would slip off but I didn't want to stop to fix it and risk dropping it in the lake.  Next time it will be secured with a safety pin!

Noting that there were other swimmers doing the breaststroke I alternated between breaststroke and crawl to help control my breathing and aid in sighting.  There was a light fog coming off the lake (the water was warmer than the air) which made sighting the start/finish gate a little tricky on the last leg, fortunately there were enough swimmers at the back of the pack with me I kept swimming in the right direction.  As I exited the water I heard a "good job!" from my former co-worker who was just behind me, it was encouraging knowing I kept pace with him.  Time: 11:07

Thanks to color coded and numbered rows I was able to find my transition spot without much trouble.  Taking my time, I dried off a bit, pulled off my rash guard, put on a t-shirt, sat on my bucket and started to put my socks and shoes on.  There was a moment of confusion when I thought I put my socks on upside down and made a mental note to wear my socks with the colored heels next time.  Rest of the gear was quickly put on and I grabbed my hybrid bike and set off for the ride.  Time: 3:48

Right out of the gates the bike route was up a (small) hill so I kept my gear low and climbed my way to the top.  The quick decent lead to the main leg of the ride which was a gentle decline after riding along part of the lake perimeter.  Knowing I wasn't going to break any speed records on my hybrid bike I settled in for a pleasant ride.  About three miles into the ride the leaders of my wave were on their way back, they were truly "sprinting" the event!

As I went down one of the hills another rider on a hybrid bike passed by and kept a short lead.  Heading up the next hilly section I passed him, leading to a game of cat and mouse as we went up and down the gentle rolling hills.  Meanwhile we were getting passed by riders on triathlon and road bikes but we had a fun sense of competition between us.  The last hill of the ride was a short but steep one, giving me the lead in the impromptu race of the hybrid bikers.  Time: 52:38

Aside from a quick cramp in my right leg as I dismounted, this transition went smoothly.  I  swapped shoes, put on visor, then realized I should buckle my race belt in the front as my shirt got caught in the buckle behind my back.  Once I had the race belt secured out I went!  Time: 1:53

The run started smooth and the leg cramp eased up allowing me to settle into an easy pace.  The terrain was gentle for the first two miles or so until I reached a pretty steep hill.  Most of my run training has been on flat routes so I had to walk most of the incline, keeping a decent pace with long strides.  From the top it was mostly downhill to the finish except for a short loop up a slight incline.  On the final stretch down to the finish I gave it all I had left and crossed the finish line with arms raised!  Time: 32:40

Improvements For Next Time

After only two months of training my swimming has the most room for improvement.  Form and endurance will help speed up my times in the water.   My T1 time could also be trimmed down as I took my time through the transition.  The biggest change for the bike will be upgrading from a hybrid (which I use to commute) to a road bike after I get a couple more seasons of events under my belt.  Run training will now include some hills so I don’t get slowed down by them as much.

About two years ago I joked with a friend who was training for a triathlon that I would never even think about doing one myself.  This week I completed a triathlon, next year when I beat my PR I will consider myself a triathlete. 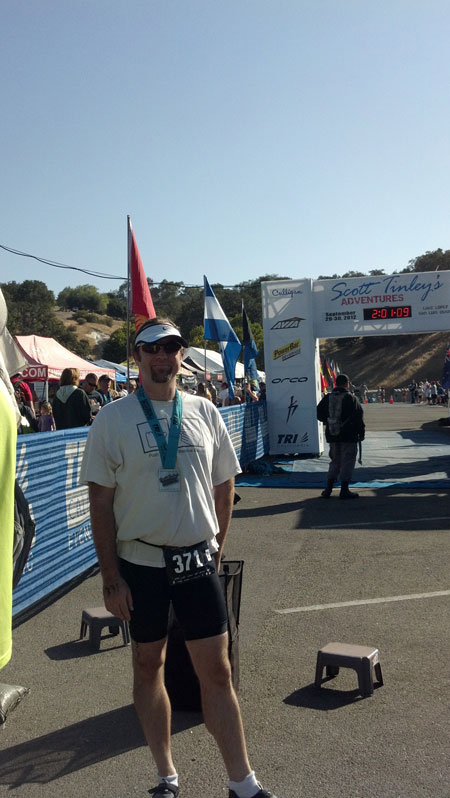