An Act of Valor: Completing My First Ironman 70.3

My lungs were burning and my legs were hurting but I had the biggest smile on my face as I ran on the red carpet and received my Ironman 70.3 medal.

Valor : The ability to to be strong and courageous in the face of fear and insurmountable odds.

Regarded as one of the toughest 70.3 courses worldwide, the South Africa Ironman 70.3, I packed my bags on the Thursday before the race and headed on the 10 hour road trip to East London.

Arriving at race registration on Friday, I was amazed by the masses of like minded endorphin addicts queuing up for race registration and buying last minute goodies at the race expo. As I registered and got my race pack, I headed off for a carb-filled lunch with my wife, overlooking the choppy waters of the Indian Ocean and the dark grey sky as a cold front passed with the swim course buoys dancing in the ocean swells.  Luckily the weather prediction for race day was light-to-moderate wind and clear skies which, at this stage, I prayed for!

The day before race day, my wife completed the Irongirl 10km run while I was doing a short bike ride on my sponsored Cervelo P3C TT bike, thanks to the guys at Cycle Lab Paarl. I decided to switch from my Bianchi Sempre to the Cervelo TT bike only days before after an earlier training session on a TT bike and I felt a massive difference in my ride.

After the morning ride, I headed back to the hotel and started packing my race bags for transition. I triple checked everything in my bike, run and swim bags to make sure I had no surprises when opening them in transition. I also made sure this time around that I pack the sunscreen to avoid any post race iron-tan.

Bike racking had to be done between 13h30 and 15h20 for my age group. I headed out to the transition area and had my bike racked and then checked in my transition bags. Never have I seen so many bikes racked, it was an amazing site to see.

Tomorrow all of these bikes will be heading out on one of the toughest 70.3 cycle courses. Each bike will have a determined athlete in the saddle, each one with his/her own story, own inspiration and own will to run over the red carpet.

After bike racking the official race briefing was held.  All the rules and regulations were explained in detail and words of encouragement were given by the race director.

I hit the sack early on the evening of race day and tried to get some sleep with race day butterflies swirling in my stomach...I knew what was coming, I was ready and I was excited....

Early morning wake up was at 04h45. Transition closed at 06h15 and my wave start was at 07h15 so I needed to have breakfast, get race dressed, check everything for the last time and then head to the race start while also looking for parking between 4,000 other athletes and 30,000 spectators!

We had access to our transition bags until 06h15 to add our nutrition and to check our bike tire pressure and lock in our bottles. At 06h12 I left transition and went off to the beach to watch the start of the pro's.

After the pro's left, they called up the second wave to the start and my age group had to head to the holding point. As we all stood there, I looked around. Nervous straight faces, nervous laughters, guys cracking jokes, some closing their eyes, either visualizing or praying and others just staring blankly ahead.

Finally our start time arrived and we headed onto the beach. It was a bit of a rush as some ran to the start line to get a good position. I decided to once again start at the back as being in front or the middle will just get me in panic mode and elevate my heart rate.

The horn sirened and off we went. There were guys sprinting the first 100m and jumping over the waves Baywatch style. As I was at the back, I walked in until chest height and started my swim. I immediately got into my rhythm with no breathing problems or elevated heart rate issues besides the normal adrenalin spike. As we cornered the first buoy, I was introduced to the Ironman washing machine: fists to my face, kicks to my stomach and swallowing litres of salt water - all part of the swim experience!

After that first turn, the field spread out and I had an incident free swim. The swell was 2-3 meters so it was difficult to see the next buoy but following the large swim field took me in more or less the right direction.

I completed the swim in 39 minutes, well within my 45min goal.

We were greeted with a beach run and then a steep incline to T1. I picked up my bike bag and headed to the changing area, got out of my wetsuit, had my banana, electrolyte drink and chocolate bar, got into my socks and bike shoes, helmet, gloves and sunglasses on and off I went to fetch my bike.

The bike course, as stated before, was very challenging. It consisted of a 45km out and back lap. The ride out was a continuous climb so for two hours my legs were working very hard. At the turnaround point I know I could makeup some time with the downhills coming up. However, as I turned, I was greeted with a strong headwind. I kept on pushing for the next 45km and made the ride back 30 minutes quicker in 1h30.

Total bike time was 03h30min. I was aiming for three hours but the challenging course had the last say...

Heading into T2 I handed my bike to the volunteer. As I dismounted I could feel my legs would be taking some time to get used to the run! I jogged towards bag pickup, got my run bag, had another banana, electrolyte/energy drink and chocolate bar. Got my shoes, cap and sunglasses on and off I went!

Out of T2 we headed down the harbour wall and had a turnaround point at the lighthouse. We then headed passed the finish line, along the shore towards the infamous incline called Bunkers Hill. We headed through the suburb and had another turnaround point where we collected our elastic to complete our first lap. We had to finish two laps then head towards the finish line.

My legs were hurting, burning and felt like jelly but after the 8km mark I got into my stride.  When heading up the hill on the second lap I had to run/walk it just to keep moving forward. The crowd support on the run route was immense and that carried me through right to the end.

The last two km I pushed it to five minutes per km and gave it all I got to finish below my goal time of seven hours.

My lungs were burning and my legs were hurting but I had the biggest smile on my face as I ran on the red carpet and received my Ironman 70.3 medal.

I would like to thank my wife for her unconditional support on my Ironman training, you are my biggest supporter.

I would also like to thank Ironman 4 the Kidz allowing me to run under their banner to raise funds for their charities.

And lastly, my thoughts go out to the two fellow athletes who suffered cardiac arrest during the swim leg. 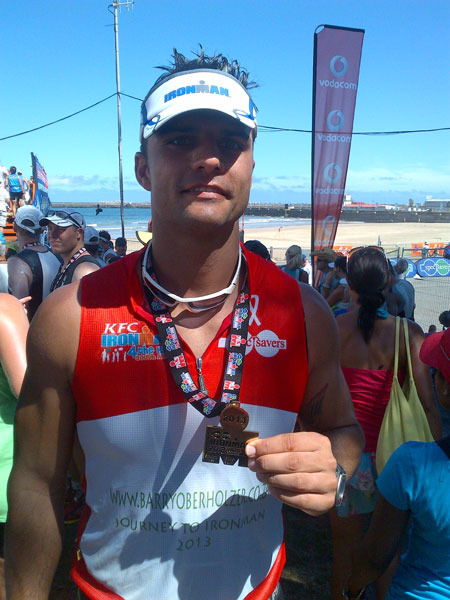