Triathlete credits BeginnerTriathlete with keeping him on track 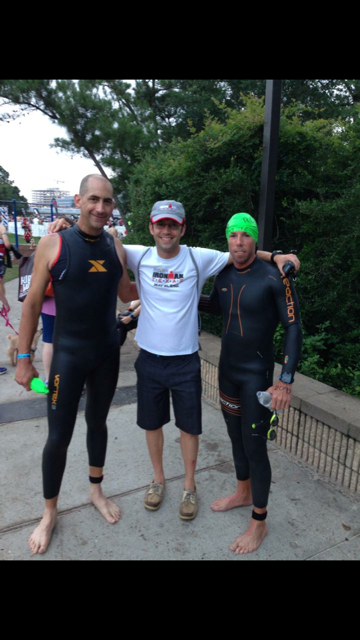 Hello, my name is Corey Pesson aka CPesson and this is my journey and story. It all started about three years ago when several friends talked me into getting a road bike and start training and racing. After doing so, it wasn’t very long I was asked to do my first sprint triathlon. Now although it was a bit of a struggle not knowing the proper way to swim and the efficient way to run I still managed to finish, and this whole  triathlon thing definitely had better interest.

So I quickly traded in the ole road bike and bought myself a Tri bike. Shortly thereafter, I joined a group of friends and the local Tri club “Lake Charles Triathletes” (LCT) and we began training for our first IM 70.3 Galveston Texas. Still with very little experience in training and racing I managed to pull off a 5:30 flat in Galveston Texas 2013. Now not fulfilling that sense of accomplishment I decided to sign up for my first IM 140.6. And with the support of my family and fellow IM friends I quickly realized I would need some professional guidance to help me on this journey ahead, so I started searching online for training and nutrition programs and stumbled across “Beginner Triathlete” (BT) where I quickly signed up.

After navigating through their web site I chose the program that best suits me with complete day-to-day detailed workouts. I then quickly relied on BT for guidance and started doing mostly solo training since I was using heart rate, allowing me to trend my results. It wasn’t very long there after I began training, I started getting several followers on my Garmin connect complimenting me on my dedication, hard work and dramatic changes in my results. Almost like having my own crowd cheering me on, this was a great feeling and I knew then it would all soon pay off.

Then suddenly just eight weeks out one Sunday afternoon I had a one hour run with intervals and was on the last ten minutes headed back home when I stumbled across a dead turtle on the side of the road. While in my zone, I leaped over the turtle rather than going around, landing directly on top with my right foot, breaking my fifth metatarsal. So suddenly all the hard work and many hours of training felt like it were gone before my eyes and was all for nothing. At least that’s what I thought.

I went to my foot Dr. who quickly realized all the hard work, blood, sweat and tears and my drive and determination I had invested in this race and agreed not to cast my foot but allowing me to firmly tape it and continue swimming and riding on the trainer to keep pushing forward.

Now I know what you are thinking ... a turtle? And yes, the joke is on me. It was a little turtle and living here in Louisiana the sides of the roads are full of these little guys who now have my utmost respect. So pushing forward with no running and really relying on my BT program guidance, I increased my swimming and rides on the trainer. After six weeks of no running and only two weeks until race day I was released from the Dr. to start my own rehab by increasing the pressure a little bit each day and performing daily massages to get the muscle and tendons strengthened again and to help minimize the soreness.

After the final two weeks and still no running here it was “Game Day”. I was told to prepare for a DNF (Did Not Finish) not knowing how my foot was going to hold up and having not run in over eight weeks. But I was not going to give up without a fight.

Then the gun went off. I was out of the water in an hour and 20 minutes, and still very relaxed. Now onto the bike: it was defiantly a little more than I expected with the constant rolling hills and the brutal head winds, but I managed to pull off a 6:30ish time.

Still feeling good and my nutrition on target, it was time to put my foot to the test. I was a little gun-shy so I started off very slow with a light jog, slowly increasing my time to a comfortable pace a managed to run over 90 percent of the run course and completed IM Woodlands Texas 2015 with a 13:30 overall time.

Of course it was certainly not the time I was shooting for but considering the rocky road I went down to get there and the amazing detailed and structured workout plan provided by BT giving me the tools and knowledge to succeed, this was the greatest experience I have ever had. Finally able to achieve that sense of accomplishment and now a Gold Member of BT and really relying on their detailed workouts, I am currently training for IM 70.3 Galveston Texas on April 10th 2016 for redemption and currently on task for a sub 4:30.  Thank you BT!