For What It’s Worth

The attitude of Wildflower

She was taking the hill seriously now. It rose out of the lower farmlands of California’s Central Coast like some stairway to a better place. But only because any place was better than the wind and the heat and the dust that threaded the drought-riddled micro-wineries and family farms.

She had volunteered, gone willingly with app-in-hand. Just how nasty could Nasty Grade really be? On a lovely May Sunday in an open-topped car, you’d swear there was no better place. But now, after a 1.2-mile swim, a 2-mile run, and nearly fifty miles of cycling, this climb was feeling too long, too steep…too everything.

She’d paid the entry fee, taken vacation time to train. And it was only 6 more miles until she could climb off that damn bike and enjoy the relative respite of the final leg of the 34th annual Wildflower Triathlon: eleven more miles of rugged trails.

Easy stuff. If you thought about it. You could always walk the run, she thought, down-shift to a slower-than-slow jog under the canopy of old oaks. And you were closer to the ending than the beginning. That, she told herself, was something. Now, as she lay on the side of the road with the sun beating down on red-to-pale face and the under-trained CHP officer squawking into his radio--I think it’s heat stroke-- he asked again and she wondered when an ambulance would arrive. Or why one had been summoned.

The air on the back side of the fifty-six-mile bike course was hot and still, just the opposite of her coldly-frenetic thoughts that ran out of her mumbled speech. Inching up Nasty Grade, I was tempted to use the entire road to zig-zag, a sailboat beating to weather, a paperboy laden with heavy news. I only wanted that hill to end so that I too could cost the next 6 miles into the transition area and pass off my number to a relay-team member who might carry our baton the final eleven miles.

But then the red lights and the yellow tarps and bystanders and the CHP and the many fellow cyclists; that girl on the side of the road going nowhere good. Just yet.

Beginning in the early 1980s, casual athletes began equating their identity with endurance sports achievements. Participatory sports such as long distance running, skiing, paddling, open water swimming, day-long bike races, and of course triathlons offered the weekend warrior a vehicle for both self-exploration and personal effacement: Here I am, ladies and gentleman, both an Ironman and Western States 100-mile finisher and therefore worthy of praise and promotion.

The landscape of contemporary endurance sports morphed from a subculture of crazies into a wildly popular notion. Many suggested it was something-about-the-experience not found in a 10k or coed softball. Thousands standing in virtual lines to race not across fields or valleys or even zip codes but states and continents. Longer and harder wasn’t just better. It was necessary. A half-marathon was half of a person. A full marathon was part way to something cool though not many knew what that really meant other than endless race entries and a constant dull ache in foreign body parts. There was a kind of quest, a hunt for a new state of being earned on the backs of re-found character.

Cocktail party conversation turned from the NFL and the NBA to Kona, K2 and RAAM. “So, tell me about finding alpha- 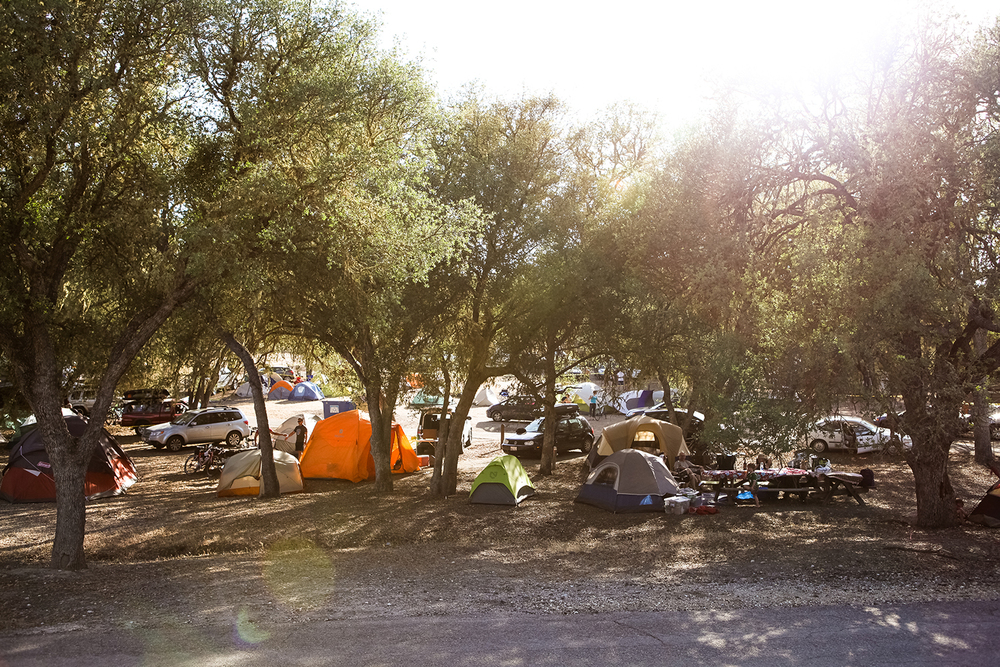 consciousness while bivouacked on the north face.” Or “well, when I dropped down into Death Valley and the temperature climbed to one hundred four, I began to feel uh…whole again.” Risk, pain, and struggle became normalized. You were judged by a finisher’s t-shirt and number of running shoes on your front porch. Skinny guys and tightly-muscled women found themselves on talk shows and magazine covers. Forget the fact that issues such as sustainable health and environmental degradation might be of some future concern. The experience of risk and reward became the dominate narrative of emerging sports.

The Ironman Triathlon wasn’t just a World Championship in Hawaii but for many thousands, a calling, a new religion. And right there to service this new shift in socioeconomic tastes in physical consumption was the production side: an army of events and goods and services to fuel the hungry fires. Energy bars and energy drinks, meters to measure power and watts and distance and speed, bikes that cost more than your parent’s first house, shoes that lace themselves while recording dual-density trail durometer. And magazines announcing the newly-anointed in iron-heavy fonts. The spandex army had been let loose upon the world to showcase every rippling illustration of anatomical advantage.

Six-time Ironman World Champion, Dave Scott had told me only half in jest one evening over a few 8-ounce light beers, “You know you’re fit when you can see the veins in your stomach muscles.”


I’d be lying if I told you I remembered her name. I remember that she had dark hair and her young skin was rapidly changing to reflect the red lights of the Highway Patrol vehicle. Seeing her on the side of the road in that shallow brown ditch provided me the perfect opportunity to stop mid way up Nasty Grade. I’ve done this before. Part of a former occupation, there’s no choice. You stop. It’s not that hard.

“Hey, how are you? What’s your name? Can you try a sip of water? Hey Chips, have any ice packs in that cruiser of yours? You look familiar. Are you an actress?” These things go through your head. And then you flash on how many have put themselves at risk in the world of endurance sport. And for what? For why? It’s a zero-sum question, of course, with as many different answers as athletes. We might take the side of the active agents—let them do what they need to do. For how will we ever find our center if we can’t go to the very edge of ourselves? Or we might find our feelings parked in paternalism—we have to protect those who for whatever reasons, cannot protect themselves from personal harm. It’s an ageless question of human management and one that was not anticipated by athletes, their supporters, and those who manage the events.

In the thirty-five years since Terry Davis morphed a 1982 Monterey County folk music festival into one of the last best independent triathlons, the list of participant occupations has ranged from crossing guard to brain surgeon to exotic dancer to parish priest. Most of the top triathletes, both elite and age group, have participated for private and professional reasons. Among the nearly one hundred thousand athletes who have competed in events at the Wildflower Festival of Triathlons, many have argued that they came to camp out on the land and stayed for the race. At its peak in the early 2000s, Davis’ company, TriCalifornia Events, would host nearly fifteen thousand athletes and their families in the rolling hills adjacent to Lake San Antonio, a massive mid-California lake with over 350 square miles of catchment and at its fullest, at least that much in acre-feet of water.

There are no hotels near the lake but the 500 plus campsites are mostly coveted canopies under scrub oak, manzanita, and pepper trees. Athletes from as far as Athens and Zurich would pitch a tent, light a fire, and watch the eagles soar as they prepared to race.

With that many people in close proximity and any legal management reserved for a handful of park rangers, USAT draft marshals, and Boy Scouts pointing course directions, you’d think the Wildflower Festival of Triathlons a cauldron of trouble, a recipe for wrongfulness. You would think. But the worse thing I’ve seen in my three decades of attendance was a big dog on a leash nipping at the hind legs of a small one. Athletes are given the tools they require for that coveted endurance experience—a safe, well-marked course, plenty of nutrition along the routes, and a shady site to set up your tent. There are clinics and venders selling arm-sized burritos and craft beer. There is a play area for the kids and an awards for the speedy. The rest you could borrow from a friend or do without.


In recent years, athletes have come to expect (and are willing to pay for) a lot more in endurance events. The micro-industry is no longer micro. Big brands and big business have not eliminated the ways and means that athletes seek experience. But they have changed it; the power of consumptive desire doing what is has with or daily lives since Ancient Rome.

Wildflower for its part, has struggled under the weight of a California drought, event competition, and athletes looking for slick marketing and 500 thread-count sheets. You won’t find the event on the cover of Conde Nast. What you might find at the Wildflower Festival is what I did on Nasty Grade, signified not by the young cyclist with the over-heated engine but by the many other athletes and supporters who stopped to help her.