My First Triathlon (and my Daughter's Third)

A recap of my thoughts from my first triathlon 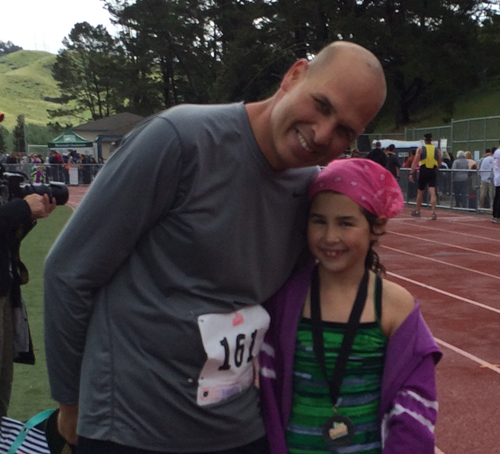 Note: This race report was from my first triathlon about a year ago. I just completed this same triathlon last weekend (as did my daughter) with significantly better results. Since this first triathlon, I’ve gone hardcore into the sport. I train 6-8 hours a week, completed 3 other tri’s last year, and have plans for at least 3 others this year, culminating in the Santa Cruz 70.3 in September.


Highlight number one has to be what happened in the transition area (which I now refer to as T2 like all of the other vets) between the bike and the run. I had an outside chance of finishing around the same time as my daughter. For that, however, she was seeded too high and I was seeded too low. You see, I started around 8am and she started around 9am and the entire triathlon took me a little over an hour and a half. Maybe another time. As I finished the bike and pulled into the transition area, I heard over the PA that the kids were jumping in the pool. I knew my daughter was going in 10th and it would take her between 3 and 4 minutes in the pool (she's a much better swimmer than I am). By the time I got my shoes changed and was ready to go out on the running course, I noticed kids coming into the transition area. My daughter couldn't be far behind. So, I waited. I added probably 90 seconds to my time, but being able to root her on and give her a high five before she got on the bike was worth the added time (It wasn't like I was competing for a medal) and was, by far, the #1 highlight of the day.


Highlight 1a was the end of the run and therefore the entire race. The race ends with a pretty good uphill run and then turns a sharp corner to the track where you run about 3/4 of the way around to the finish. I was pretty gassed and the last thing I wanted to do was run up another hill of what was a pretty brutal running course, even without the swim and run before. But - at the top of that hill at the bend before the track was my daughter - wearing her finisher's medal, jumping up and down, and rooting me on. It gave me a last boost to the finish.


The second highlight of the day was the friends and neighbors that both ran and rooted the runners on. I trained on and off with three other great guys, including doing a run-through the prior weekend. We talked about the tri every time we saw each other, compared notes, asked and answered questions (a couple of the guys have run it before and were a huge help), and rooted each other on. We hung out the morning of, passed each other at various times, and continued to root each other on as we were on the course. There were also lots of neighbors around watching and cheering on. It was a great environment to take on something hard. Now that we all finished this one - we're talking about running other and potentially longer triathlons in the next coming months. Collective accountability can be very powerful.


That brings me to the third and final highlight - the training. It may seem strange that the training was a highlight above the finishing. This is actually the third time I've talked about doing a triathlon in my life. Once was about a dozen years ago before kids - I hurt my knee. The second time was two years ago - I hurt my shoulder. It wasn't even that I hurt something. It was more mental. This time was different. The goal was not to finish; rather, the goal was to get in good enough shape to run a triathlon any time I wanted. The journey was more important than the destination. I had another inspiration as well - keeping up with my very athletic and hyper-competitive daughter as we both grow older. Older for her means stronger and faster with greater endurance and I want to be able to keep up.


So - to continue to keep with her and maintain a fitness level to run a triathlon any time I want, I am going to keep up the training. Through the process of training, I've come to enjoy swimming and tolerate running and look forward to getting back on the bike today and back in the pool tomorrow.


Finishing was pretty cool, too.