How it all started...

I rode my old beater bicycle to my daughter's swim team, and now I'm a triathlete

I am a 44 year old father of a 10 year girl. When she was 8 and riding her bike pretty good, she was complaining that she wanted to ride further than we would let her by herself. So I bought an old 3 speed Schwinn off Craigs List and we started going for bike rides on the local bike trails. Eventually I was riding by myself more than I was riding with her (we still ride together fairly regularly).

My little girl has been on an age group swim team for a few years now, and I help officiate the meets (I swam in high school, and the rules haven't changed too much...). Her team also has a Masters team, and I've helped officiate a few of their meets as well. At one of those meets I rode my bike to the pool. After the meet, one of the swimmers invited me to the bar they were all heading to for their "victory celebration". I told him I would meet them there, but I had to ride home and get my truck, as the road leading to said bar has an interstate interchange just before it and doesn't seem too bike friendly.

Once I got there, a few guys were asking about my bike and how much I ride it. One guy suggested that since I bike and swim, I ought to do a triathlon. Except I hadn't swam in 25 years and I hadn't ran since boot camp which wasn't much sooner. But for some reason, that night I went out and tried to run around the block. I couldn't pull it off. I guess now is a good time to mention that I am 5'7" tall, and at the time I weighed in at just a bit over 200 pounds. I am a type 2 diabetic due to that excess weight. I tried again the next night and on the third night I got it. At that time I downloaded an app for my phone called Couch to 5k, and started using it. I picked a 5k I was going to do, but I didn't have time to do the whole program, so I cut out one workout a week from it. I did the running workouts at dusk, as it was summer and hot and humid. Most days I would go out for a bike ride in the afternoon. By the end of August (about 6 weeks later) I ran my first 5k; well, I walked a bit of it. 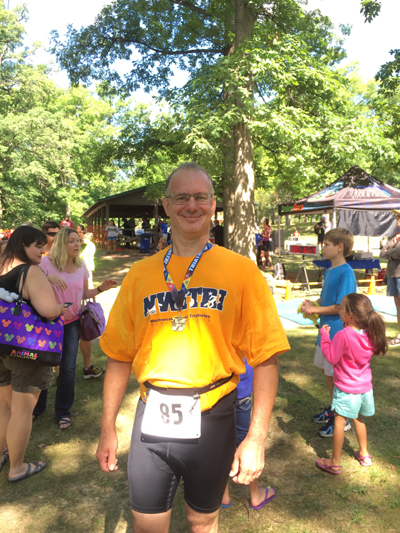 About August I bought a more racing type bike. I bought an old Trek 1400 road bike that had some nice tires and a set of brifters already on it. A few months ago I clipped on some really cheap aero bars, and added a small saddle bag to hold a spare tube and a few tools. I may change the pedals, as they are one sided (the other side is for clipless shoes perhaps?) so everytime I take my foot off them it's a gamble if they are going to be in the right position when I get back on them.

I continued running and biking until about November, when it was starting to get too dark to hit the trails after work. At that time I joined the local YMCA. I started running on their indoor track, and biking when I could. I discovered that they rented the high school pool for lap swimming and swim lessons and started going there. Their pool must have been longer than the one we swam in in high school. I started swimming two nights a week. It worked out well since I would drop my daughter off at her pool, and then drive to mine, swim for a 1/2 hour or forty five minutes, and the go back to pick her up.

Since New Years, I try to do each sport two days a week. I try to do a long day and a fast day each week, though it doesn't always work out like that. (It's also hard to tell which is which when I run...) Somewhere along the way, I read in the challenge section about a plank a day, so I've been doing that each morning while my coffee is brewing. I also found an eight minute bootcamp workout video for days that it's too rainy or cold outside or if I just don't have time. I am trying to do a 5k race at least every other month. Our Y just started a monthly noncompetitive 5k series a few weeks ago, so that will make it a bit easier for me.

So, I guess my whole interest in triathlon started by me riding an old Schwinn to a swimming pool which caused a guy to tell me to do a triathlon.


Since originally posting this, I've complete my first race. The race report is here.

I finished fourth in my age group and had a good day, but felt my run conditioning (lack of) held me back.