What Running My First Triathlon Taught Me About Life

The future is an accident. 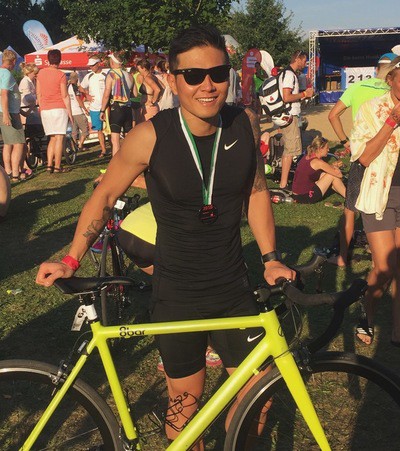 The following is excerpted from the full story, available at the blog link below.

The story began when, together with three friends, I spontaneously signed up for an Olympic distance triathlon (sounds fancy but it’s just the standard triathlon distance; 1.5km swim, 40km bike, 10km run) only seven weeks prior to the actual race day.

This was not a great idea because, believe it or not, I’ve never swam or biked that long in distance my entire life and never in a competition. But bad decisions tend to make good stories and reveal unexpected lessons, and the ones I collected from this experience are definitely keepers.

nevitably, at some point during a group trip you’ll encounter some form of near disaster, and this one was no exception. Due to nobody's fault but ours, we were unable to secure any accommodation since we only started looking at the very last minute?—?of course. After exhausting all possible options (including RVs), we were forced to confront the reality that our only choice was a campsite 12 km away from the race site. To make matters worse, because we could only get into town late, we would miss the last train connection, which meant we would have to bike over 30 km with all our gear in tow. In the dark. The night before race day. As you can imagine, I was pretty nervous during the days leading up to the event and I desperately wanted to be in the best possible state of mind for race day. I was livid that I had allowed this to happen.

In the end, however, this chain of unexpected events worked out beautifully for us. First of all, through pure chance we discovered we could camp at the race site instead, which meant we didn’t have to stress about getting up early the next morning to find the race location. This was especially important for Thom and Fred, two of my buddies who had their sprint race scheduled as the first event of the day. I wasn’t envious. Also, we got to settle down earlier and enjoy a longer night’s rest. And that two hour bike ride? It turned out to be one of the highlights of the trip. Four first timer try-athletes biking in the dark in the middle of nowhere in Saxony, Germany. Now that’s something I’ll never forget.

I couldn’t help but think: What if we had caught a train and stayed in a hotel as originally planned? What if everything had gone smoothly? We would have missed out on the bike ride and the spontaneous camping. Two pivotal high points of the entire trip.

We spend so much of our time and energy stressing about things, people, and events, trying to exert control over them even though life almost never happens as linearly as planned. Yet, it doesn’t seem to stop us from expecting it do so.

It’s been said half-jokingly that the secret to happiness in life is having low expectations. After all, they are the primary cause of disappointments. Don’t worry, I’m not asking you to abandon planning or to cease having expectations completely. Without them we’ll flail around aimlessly. I’m saying that we should be open in how we get to our destinations. Plans can trap us, but so can the idea of possibilities. Most people, as I’ve observed, don’t fully consider the trappings and limitations that endless possibilities bring. A rigid plan can be constraining and suffocating the same way possibilities can be overwhelming and debilitating. Instead, the trick is to strike a balance somewhere in between?—?have a plan, but keep an open mind and be adaptable as the reality presents itself.

Rather than setting ourselves up for failure, how about we re-calibrate our mindset in a way that minimizes disappointment and maximises happy surprises.

Let’s think of the future as an accident. It’s an accident because we don’t know how it’ll unfold precisely. The only way to find out is to explore, to go somewhere we haven’t been before and allow ourselves to be surprised.

The swim was very difficult, the bike and run were just hard.

This race was without a doubt, a life-changing experience, which amounted to less than 150 euros in monetary cost. What I got in return: the magic of adventure and excitement of exploration. The spirit of competition and the happiness from sharing an experience with friends that I love. And above all, the unbeatable feeling of conquering myself for a moment. Things I wouldn’t trade for anything. Things I’ll never forget until the day I die. Pretty solid returns on investment (time, energy, and money) if you ask me.

I finished the race in 2 hours and 55 mins, and placed 22nd in my age group. A pretty average result. But I’m pretty happy overall, considering my limited training and the fact that it was my first race.

Looking back, I wish I had taken the plunge earlier. I could have dismantled some of the limiting beliefs earlier and collected more interesting experiences. But then again, as the zen proverb goes: “When the student is ready, the teacher will appear,” so these days, I try to embrace fully that I’m exactly where I’m supposed to be and focus on what I can control: to arrive into, and inhabit each moment as consciously as possible. You’re still here? As you might have suspected by now, it took you roughly the same amount of time to read this post it took me to complete the race: 2 hours 55 mins. Converted into Internet time-units of course. Congrats! You’ve won the day. Let me just wrap this up so you can get back to playing Christmas songs. I’ll leave you with this: You’ll be surprised at how the stories you tell yourself are only as real as you make them up to be. The only way to find out is to confront those stories. Don’t get stuck in a mindless loop of inaction. Follow through with action and everything else will follow. Everything.

Now, go run your own version of a triathlon.