I hadn't gotten good sleep the entire week because I was diagnosed with Shingles 5 days before the race and the pain in my right leg made sleeping difficult. I rested as much as I could that week, mainly because I felt so exhausted and I only got a short bike workout in that week.

I woke up at 4:30am and ate a banana and a yogurt. I typically don't eat before my morning workouts so I didn't want to put too much food in my stomach. My neighbor came over at 5:30am and we drove together to the race. We were parked and heading into transition at 6:15am. The swim was scheduled to start at 7:00am with swimmers starting in 5sec increments so I wasn't scheduled to start until about 7:30am since my bib # was 658.

Here's where my race plan started to deteriorate. This was my first triathlon and I'll admit I was really nervous. I spent a lot of time talking to a couple of friends that were in the race as well as others that were near me in the transition area. Before I knew it, it was 7:30am and we were singing the National Anthem and the race was starting...then I started watching the lead groups start the swim.


The swim was a 400m snake swim in a 50m pool. This was the event I most feared...3 months prior to today, I couldn't swim across a 25m pool. I had taught myself to swim at the University of YouTube and by watching my daughter at her weekly swim lesson. There was a really nice older man directly in front of me in line and he could tell I was really nervous as I watched people in front of me struggle down the lanes. One man literally walked the entire "swim". The man in front of me turned to me and said, I'll give you one piece of advice, "don't stop moving...do whatever you have to do to keep moving down the lane. It will be better for you and for those behind you". That one piece of advice proved very valuable for me. I jumped into the pool and immediately sucked in a mouthful of water as it was much colder than the 84* indoor pool I was used to. I struggled through the swim with a combination of front crawl, backstroke and yes, even some walking...just to keep moving forward. Since I couldn't swim 25m 90 days prior to the race, overall I was very happy with finishing the swim in under 12min.

I swallowed a fair amount of water and as I started jogging through transition, I had to stop and throw up the pool water. I felt better after that but it did make me a little dizzy. My bike was the only bike in my section of the transition area when I got there... 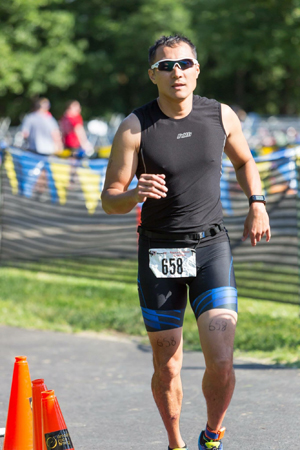 This is the leg I'm most comfortable with and the one I knew I would make up a lot of ground and I did. I pretty much stayed to the left and passed countless other riders each lap. By this time, there were hundreds of riders on the course since it's a 3 lap race. During my training rides, I drank Tailwind, but for some reason, I just couldn't drink it during the ride. I craved water and the Tailwind tasted like seawater, so I didn't drink anything on the ride. I thought, I'd just drink some water at T2 and I'll be fine...not quite.

As soon as I hopped off my bike, my right calf cramped up. This was the calf that had the Shingles sores on it so I don't know if it was the shingles or the lack of hydration but I had to hobble to my bike rack. The good news was that there was only 1 bike on the rack in my section of the transition area when I returned...the bad news was I had to stop and stretch my right calf before I could walk.


This is where I became discouraged...I had trained a couple of bricks in the weeks leading up to the race and had done fine. Was able to run around a 9min pace off the bike. Today, with my calf locked up and dehydrated, I suffered through the run and even had to walk a couple times. TBH, it was disheartening to not be able to run at the pace I knew I could run. I don't know if it was the shingles or just dehydration but my body just wouldn't respond and I limped through the 5k.

I had a cold bottle of water, some orange slices, a banana and a coke. I hung out with my friends that did the race and overall had a great time.


What limited my ability to perform faster?

It's hard to say how much the shingles affected me vs. this being my first triathlon but it's probably both. I signed up for another sprint triathlon that has slightly different distances for each event, but as long as I'm healthy for that race, I'll have a good benchmark to start my training for next year's races. That's right, I plan on doing more races next year...maybe 3-5 with at least 1 Olympic as my A Race.