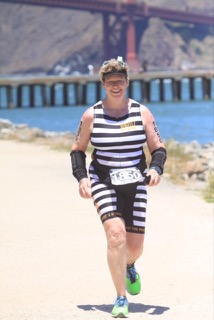 After completing her first Ironman 70.3, Diane LeMay took a couple of weeks off. She needed a new goal. When she met with trainer Kim Clark, Clark asked her about her interests.   LeMay, as a seminary student, hopes to become a member of the clergy and work in the prison system. What could combine a triathlon and prison? Escape from Alcatraz Triathlon, with a 1.5 mile swim, an 18 mile bike and 8 mile run!

It was October and the event was coming up in June so there was no time to waste. LeMay’s training was much more intense this time around. It included endurance swimming much more than her original training schedule. She swam 2- 2.5 miles often to get ready for the race. For the cycling portion of the race, LeMay used a virtual trainer several times to help her become familiar with the course, which she found helpful. Recognizing landmarks gave her a mental edge, she thought. The run in the Alcatraz race incorporates all types of terrain, including sand, trails and roadways. And, there is the dreaded sand ladder at about mile 4.5. To be able to make it up the sand ladder, LeMay had to work on lifting her legs and knees, so she practiced on a set of 148 stairs: she conquered about 1500 steps every other week to get those muscles strengthened. In the race, once you get through the sand ladder there are still about 3.5 miles to run. The training was intense but she felt well prepared. LeMay felt that it was necessary to take a couple of weeks off of work just to focus on her training, so she did.

LeMay doesn’t like to get to a race too early: she gets nervous. So, she went out on Thursday and planned to get in a practice swim in order to get used to the 50 degree water temperature and the waves and to get used to her wetsuit.   During her practice swim, LeMay got caught in a riptide. She was swimming forward but going backward. She put her hand up for some needed help from one of the kayak guides, but when it reached her, the man in the kayak said, “You are never going to make it. You have to turn around and swim to the other beach.” Then he was gone. She couldn’t see the other beach. She thought she was going to die right then and there.

LeMay felt like she was going to be OK, but she was taking in water. All the other swimmers were gone. Two women saw her from the dock and began yelling to her that they were going to get help, but she couldn’t hear them. She just kept screaming, “Don’t leave me.” They didn’t. They kept talking to her, and even though she didn’t know what they were saying, it was a relief to know that someone had eyes on her. Soon, a man in a kilt (yes, a kilt) came out on a paddleboard. He said to her, “Your swim is fantastic and your form is great. I am going to paddle next to you and you are going to be fine.” And, she was. When she got out of the water she began to cry. She never saw any of them again.

Walking the 2.5 miles back to her hotel she had to process what had just happened: it was almost unreal. She knew if she didn’t get back in the that water on Saturday for another practice swim she would never get in on Sunday for the race. “I had to slay that dragon,” LeMay said, who went back to her hotel and read a book about “reclaiming your badass.”

The next morning the same group of swimmers was ready for another chance at a practice swim. LeMay told one of the women who was working as a guide, about her experience in the water on the day before. “That woman was so comforting to me and she told me she would have me in her sight for the whole swim,” she said. Whether or not she did was unclear but it didn’t matter. LeMay felt like the woman had her back the whole way, and as hard as it was to make herself jump into that water, she felt excitement when she did, she felt free. And, she swam the entire course, coming in with twenty minutes to spare before the cut off. “I was on Cloud 9,” she said. 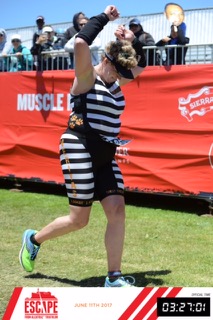 Sunday, the Coast Guard made the announcement that the swim portion of the race was cancelled: the tide was not conducive to swimming and was unsafe. The race would start with cycling. One woman near LeMay had been trying to get into the race, a lottery, for ten years. LeMay felt so lucky that she had done the swim the day before: now she knew she had accomplished it, even though it wouldn't be part of the race.

The race was unlike any other: they had to bus the participants to the bikes, wetsuits had to come off in 50-degree weather and the races were timed because organizers had to send five people off at a time for safety reasons. But, she did it and she is proud of her accomplishment.


LeMay lost 48 pounds in during her triathlon training, saying that she actually had to start eating more, and smarter, during that time. She learned a lot about protein.

What’s next? LeMay isn’t sure. She suffered a torn meniscus in the sand and had to have surgery. Her knees are not in great shape, so she may have to find new ways to challenge herself. Swimming and biking are her two favorites anyway so an Aquabike might be in her future. The biggest lesson she learned from her first two triathlons: the physical challenges made her an emotionally stronger woman.