I wanted to do something in my life before I hit the big 5-0. So, why not do a triathlon?! 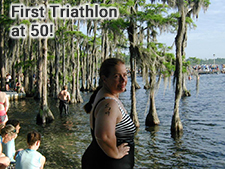 It was 2009 and I was going to turn 50 soon. I wanted to feel like I at least accomplished something in my life before I hit the big 5-0. So, hey, why not do a triathlon?! I was overweight by about 100 pounds. I trained by myself and followed one of Beginner Triathlete’s training plans, which was crucial because I would not have trained correctly and probably would have had an injury. Beside my stomach in knots and not breathing for the hours leading up to the start horn at the lake, I felt I was ready. Unlike the majority, I was not worried about the swim. I love to swim. But the bike and run were different – I’m a LOT less buoyant!


The most important lesson I learned about my first tri was, don’t worry if you’re last or not, or what place you’re in. You won’t know for sure until it’s over anyway. Just do your very best and finish – no matter how you get there! I was so consumed with not being last, it ruined the whole experience for me. It was horrible. What a horrible mantra that was. Yes, I finished. No, I was not last. Sure, I knew I had work to do, but I failed to see the accomplishment of all the hard work I had put in.

Since then, I have done 23 more triathlons ranging from super sprints to a half ironman - actually 2/3 of the ironman, I did the aquabike. Each race has its own story, like the time I wore my helmet backwards the whole time, or the one that had an ocean swim and it was 45 degrees out with 20 mph winds. In the swim, either way you turned your head to breathe, you received a face full of ocean! You know what? There were only 87 people in that race and I DID come in last, dead last, but I was ecstatic! I wanted to quit at the swim, but made it through. I was being tossed all over with the wind while on my bike, but I did it. Mother Nature tested me and I survived. I have a lot to be proud of and want to do at least 2 more by my next birthday. If you did your math correctly, that would be the big 6-0!