Zero to Half Ironman in 16 Long Weeks

Yes, the jibes and taunting of friends’ former glories can be powerful concoctions. So, when my two friends decided to settle a niggling grudge, a friendly Ironman popped his ugly head up. The stage was set—a showdown between the retired elite triathlete, Tim, who reckoned he still had the “power,” and the weekly endura athlete, Chad (who brought along his mate, Matt, to keep things clean).

The sensible thing to do would have been to watch from the sidelines, but I thought since they were going to have a go, so would I. Just had a couple of problems…I could count the number of triathlons I had contested at zero. Secondly, I could count on one hand the number of times I had been swimming in the last 17 years. But just to make it interesting and to give them a chance at some fun, I decided I would re-learn to swim freestyle, as it’s now called—not front crawl as it was when I was a lad.

I thought I should find out exactly what I had got myself into, so I searched on Google and found this site. Lucky me! I downloaded a training program, and started reading through it. Eighteen weeks of training in all, and I had just over 23 weeks left. More than enough to get my swimming on par. Surely I would pick it up—no sweat. To be fair, I had been a good swimmer at school, so I knew I could swim, but maybe not as far or as efficiently as once upon a time.

I started swimming at my local gym, which proved to be a bit of a nightmare, as I could only manage 50m at a time—I had to be able to swim sets of 100m in less than four weeks! I persevered for another week, and I realized this was going to be tougher than I expected. I needed professional help! Luckily the gym had a swim school, and over the next 15 weeks Peta was able to turn my swimming around. Saturday mornings were like hell on earth as I was made to swim with one arm, then no arms, and then no legs…the list goes on.

Swimming covered, now what about the bike? Buying one would be a good start - a nice new shiny Trek with 20 gears—me thinks I’ll need them all. I started getting up in the middle of the night (well, 6 a.m.—it was a time unknown to me) and cycling around Sydney in the middle of winter…I must be mad. Sundays I would get out into the hills. The k’s would pick up steadily, and this was fun…unlike the swimming, which was like torture since I was struggling so much with it.

Yes, something I knew I could do! I had just finished the Sydney half marathon. I stuck to the plan in what was probably the least taxing of the 3 disciplines. But just when I thought I had a handle on this, I damaged by left ankle and was unable to run for 8 weeks—at least the physio said I could swim and cycle.

Training progressed, and it took over my whole life. Weekends were just rounds of training, sleeping and buying more equipment—cycling shoes, goggles, bike tops, shorts, the list goes on. An expensive sport…no wonder Chad is doing this every weekend.

I thought I’d better test my fitness before the Canberra Half in December, so I signed up for the Penrith Tri, a 1km swim 30km bike and 10km run. The training was going to plan. I could swim now and could probably make 1km if pushed. I entered the race in mid November. The swim was in the old Olympic rowing lake from the Sydney 2000 Olympic Games. The bike and run around the grounds looked pretty flat—all good.

I was running late, missed the briefing, and just managed to get my gear into the transition before it closed – there are so many rules they are over whelming the first time around. Mental note to myself: get to race early next time. While standing waiting for the swim I realized I was the only person who didn’t have a swim cap on. Luckily my girlfriend was on the case and brought me my cap. Second mental note: read the instructions, I could have been disqualified! Who knows, too many rules!

The race was on! I managed the swim, zig zagged up the course (must remember to swim straight next time) out of the water in 22 minutes…great transition, no problem at all…jumped on the bike for 30km – all done in 64 minutes…going well…nailed the run in 48 minutes…and legs had plenty left. All up: 2hrs 16 minutes, not bad for a first effort. I began to think the Half Ironman was achievable. Now I had three weeks to get my act together.

Sixteen weeks and 1615km of cycling, 394km of running and 65,589 meters of swimming later it was the eve of the big day. Plenty of hydration, ready to go, early night and 8 hours sleep—that was the plan. However, we had booked into the noisiest hotel in Canberra just opposite the only nightclub open till 5 a.m. Great, 2 hours of sleep, all up. Walking down the stairs of the hotel we met all the clubbers going to bed—how I wished it was me! We had a long hard day ahead of us and they were off to bed! At least Tim, Chad and Matt were in the same boat.

Race day, the Canberra Half

I wetsuited up and waded into the lake, which was brown and horrible—not like the sea at all. I couldn’t see my arms enter the water. Best not ask why the water was so brown. I swam to the start - a nice 200m warm up, wasn’t counting on this. Then the race was on. I managed to get round the 1.9km in 42 minutes, 3 minutes ahead of my estimate. I avoided being swum down by the next wave and was out the water alive and kicking. I ran up the burning gravel to the transition area. Transition no problem—I hopped on the bike rode 90km in 3 hours. All was on track, except my lower back was burning from the bike.

The next transition proved interesting, since I was unable to bend over. I had to sit on the floor to put my runners on—this was proving rather difficult. The first 10km were hell, but the legs pulled through and the second 11km were easier. All the training had paid off and I managed to finish. All limbs still working, and time for a well-earned banana.

So on reflection I have learned many things: nothing ever goes to plan, try to keep to the training plan no matter how fatigued you are feeling, and record your workouts to track your progress over the months. It’s all in the mind—you can succeed, but fail to prepare and prepare to fail.

So who won the grudge? The endurance machine Chad, of course, in 4hrs 43 minutes coming in 46th. Next over the line was Matt in 4hrs 53 minutes in 88th place. The retiree Tim managed to be first out of the swim—after demolishing the opposition with such a lead, he swam backstroke part of the way and managed 5hrs 25 minutes in 309th place—very respectable, especially since he had failed to prepare. Finally I was over the line in 5hr 59 minutes in 551st place from a field of 839. Not a bad effort for sixteen weeks of training. We will all probably be back next year like lemmings, but the rewards are worth the sacrifice. I am the fittest I have ever been at age 33 and 100 kilos – magic! 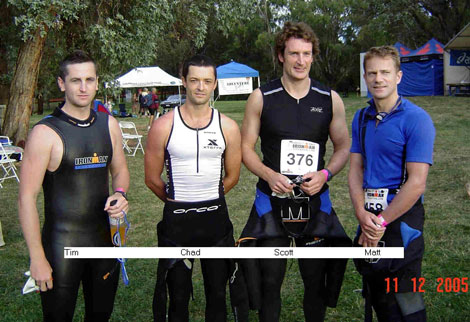