Ironman on a Motorcycle - Race Support for IMAZ

I was not an official; I simply observed the race and the officials doing their thing. Here is what I saw:

I traveled to IMAZ to support my athletes and ride motorcycle support for the race. I landed a gig as a driver for Jimmy Riccitello, the head race official. I was able to move all around the race course and it was very interesting to see the race from all perspectives.

As I see it, the race organizers/officials can assume two roles:

From my perspective, the officials have chosen to take the proactive approach. During the race I just wore my motorcycle helmet. I was not an official; I simply observed the race and the officials doing their thing. The style was proactive, in that the officials made an effort to break up packs and small groups of cyclists rather than simply hand out penalties. I think the athletes appreciated this.

The Penalty System
This was how the penalty system worked, from the back of a motorcycle:

I think the system worked VERY well, with perhaps a few minor tweaks that I’ll submit for Jimmy’s considerations. Officials were able to assess penalties much more quickly, efficiently, and safely. As the motorcyclist, it would have been very challenging in some parts of the course to safely negotiate motorcycle and cyclist to the right side of the road. In fact, it would have been impossible in some locations.

The Pointy End
Jimmy and I left about ten minutes after the first pro and then rolled up to the pro race, where we hopped around for about two and a half laps. On the first run out on Beeline Hwy, Jimmy assumed a very pro-active role, telling the athletes what he did and didn’t want to see, etc. I remember he even asked Michellie Jones if the male pros around her were getting in her way. From my perspective the race at this point was very fair, with the pros riding within the rules. If anything, I’d say Jimmy worked to establish a larger draft zone than I had expected.

IMAZ is a three lap course and by the start of the second lap, things began to get pretty crowded out there, as the pros and faster age groupers began to work their way through the slower athletes. Jimmy and I spent a good deal of time near Jonas Colting, Dave Harju and a few others.

Near the end of the second lap and into the third we settled in with Lovato, Stijn, and Spencer Smith. Lovato appeared to work to push the pace. Stijn, usually in second, continually appeared to work the aid stations and establish a gap, only to have Lovato patiently close the gap. Spencer Smith appeared to be very patient, riding steadily in third.

Throughout our time together on the course, Jimmy also relayed miscellaneous incident reports back to the race organization, checked in on the penalty tent volunteers, grabbed the attention of another moto-official to position them differently on the course, etc.

The Middle of the Pack
Near the end of the pro race I dropped Jimmy off and picked up another official. By this time the age groupers had for the most part sorted themselves out and were definitely in “just get it done” mode. I would roll through all the 'oneseys' and 'twoseys', looking ahead for small groups. About 50m off the back I’d pull in the clutch and glide behind them as the official observed the race. For the most part, I would describe what I saw not as intentional drafting but rather a lack of sense of urgency with regards to executing quick passes or exiting the draft zone when passed.

The Back of the Pack
How could you roll by these folks and not give them a few good words? Race support or no, I’m an athlete and can only begin to imagine what it’s like to ride a 7:30 bike split in route to a 17 hour Ironman. To me, this was the best part of the gig and I could have hopped around on the bike course all day.

Please note that I saw the pro race, the last half to third of the MOP, and middle of the BOP ride. My description above applies to these groups. I didn’t witness the first third of the FOP age group bike.

The Ironman Pack
So I would say the “Ironman Pack” that people describe is more of a loose group of people riding near each other because they’re simply not paying attention or are too worked to do anything about it. I think these athletes will appreciate the proactive stance of the officials, as they glide next to the group and observe body language, intent and the integrity of the athletes. However, within any of these groups you will get those for whom the draft source of 10-15 athletes is just too good to pass up. Don’t worry. You’re very easy to spot and I feel the streamlined penalty process combined with more motos and educated officials on the course will improve the fairness of these events.

Athletes need to understand that almost any course, especially those centered around an urban venue, will have natural choke points where it’s not very safe to assess a moving penalty from the back of a motorcycle.

The Course and Safety
The bulk of the course was the out and back on the Beeline Highway. This is a four lane divided highway and we had the two south bound lanes. However, the cones were on the dividing line so we had one lane on the out and one lane plus the shoulder for the back. The outbound side was more than tight, with 2000 cyclists, motorcycles and support vehicles jammed into three laps. Actually, this might be overstating it a bit. Let’s just say it only took one rider not all the way over to the right plus a cyclist lazily passing him plus me working my way through plus a fast AG-er or pro coming up on my wheel for things to get real tight real quick. Often my only route was over the line and into the oncoming bike lane. I whacked more than few cones on race day and my cyclist’s head was useful in anticipating the bottle reach, the left look over the shoulder, etc. After a while I began to roll through on the left, honking the horn to clear the way for a couple pros or as a polite reminder for athletes to ride on the right side.

For the first 1-2 laps the back portion was similarly tight, as the cyclists stayed in the road and off the shoulder. However, by the middle of the 2nd lap and into the 3rd I think they had gotten the message from outbound motos using their lane and they began to ride into the shoulder. The course became MUCH safer at this point. It got dicey again on Rio Salado, as the race took up the left lane with vehicle traffic on the right. Or rather, this was perfectly safe for the athletes but made the job of officiating almost impossible, as I had to either skirt the curb on the left to make it through or dive in and out of the traffic lane to work my way through the race. Either way it was practically impossible to pull up next to an athlete to assess a penalty. I can only imagine what this section through town would have been like on race day last year, with such a convoluted course. The ’05 motos deserve big props, I can tell you.

The Numbers
For those who are curious, Jimmy probably gave out 8-9 time penalties and the other official 5 or 6 for a total of about 15 from my bike. Not sure how many moto-official pairs were out there, maybe 10?

Coach’s Hat/Helmet:
Whenever I attend an IMNA race, I make a point of watching 2000+ athletes exit T1 at the mount line. As a coach and athlete you can get some great ideas of what do, and not do, with regards to bike fit, set-up, equipment and technique. That learning opportunity was multiplied when I was able to actually get out among the athletes and ride with them. It was particularly valuable to observe changes in athletes over the course of the bike race.

All in all, I had a great time, riding all day with complete disregard for the rules of the road, dragging the pegs through corners, flipping tight u-turns on a 1000lb bike, giving a honk or thumbs up to friends and athletes, and in general taking a few occasions to force Jimmy into an underwear change. It didn’t help his situation that he’s so light that I hardly noticed he was back there. For now I’m planning to ride up to CDA for a repeat gig and would like to do the same for Kona. I can’t pass up the opportunity to thrash a rented Harley on someone else’s dime.

Rich is a Joe Friel Ultrafit Associate, an Ironman World Championship Finisher, a USAT certified coach, and the founder of the Pasadena Triathlon Club in Pasadena, CA. Rich has personally trained over 250 Ironman finishers since 2001, and helped thousands more coach themselves more effectively through his training articles and active discussion forum. His endurance training company, Crucible Fitness, offers a range of personalized coaching and performance services, including FIST certified bike fitting and metabolic analysis with the NewLeaf system. He also sells affordable half and full Iron distance training plans through TrainingPeaks. Visit www.cruciblefitness.com for a complete list of services. 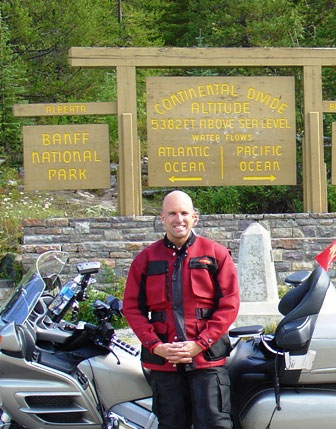