Pursuing a challenge, which took a year to get down to mentally and a few weeks of actual training!

The big day arrived... Will I be able to perform and finish my first sprint distance triathlon? Having completed a mini-triathlon just over 6 weeks ago and having started swimming and running training just over 7 weeks ago, I was not sure whether my body would handle the pain of the challenge.

Indeed, there is a substantial difference between doing a swimming, cycling or running race in isolation, and doing a triathlon race. Even though I've been a serious road and mountain bike racing cyclist for the past 6 years, I’ve experienced the theory of specificity: No matter one's fitness, one has to swim to be a good swimmer, cycle to be a good cyclist, and run to be a good runner, and one has to do all three sporting disciplines to be a good triathlete!

On the 29th of August I participated in a 5K run and I was pleased not to finish last, considering I probably ran around 6 times in my life before that running race. On the 6th of September I completed my first-ever open swim race over a distance of 2K. After the swim, it was evident that my swimming needs substantial improvement.

On Sunday 17th September 2006, I managed to complete my first ever Sprint Distance Triathlon (750m open sea swim, 20K cycle and 5K run). I was nearly last out of the sea, reeled back around 7 competitors by the end of the cycle, only to lose 5 of them in the run as my legs were full of lactic acid from my relatively good bike time-trial. Indeed, a number of race officials and spectators said I performed quite well to finish with a time of 1 hour 19 minutes and 30 seconds for my first triathlon race over a sprint distance.

My transition times were quite high and when I started the run, I was in so much pain that my goal was to be able to finish the 5K run. I was running with a bottle and I was suffering a bad stitch from the effects of having half an energy bar at the start of my cycle. Nevertheless, I made it to the finish with another competitor closing down on me in the final kilometer of running, but I managed to keep him at bay by 4 seconds.

I must admit that I underestimated the amount of lactic acid that would be present in my legs at the start of the run... and I suffered the consequences, mostly due to not riding a high cadence in the bike section.

Now, I hope to be able to complete the Maltese National Championship Olympic Distance Triathlon on October 8, 2006.

The photo depicts me and an Over-40 category buddy of mine after the race. 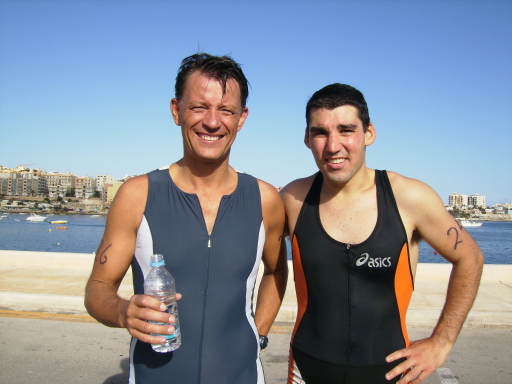