Ironman Arizona 2008: The Day I Became An Ironman

Thousands of spectators lined the shore and bridges overhead. When the announcer said, “Welcome to the best day of your life,” the possibility was still there for all of us.

The inevitable cold hit on Wednesday night before we left for the race. It was just a small fever. By Thursday morning it had settled in my throat and my voice was gone. I had a bad cough and no voice on race day, but felt OK.

The Swim
Despite reports that the water in Tempe Town Lake was “frigid,” I found the 70 degrees comfortable in my full wetsuit. We had to get in the water and tread for 15 min before the gun went off, so there was plenty of time to take in the sight of all of us bobbing around in our blue and pink caps. What a contrast to my solitary laps in the pool. The National Anthem boomed over the loudspeakers. The only thing louder was the chorus of 2000 in the water singing along, hands over our hearts underwater.

Thousands of spectators lined the shore and bridges overhead. When the announcer said, “Welcome to the best day of your life,” the possibility was still there for all of us.

What a mess when the gun went off- people swimming in all directions. What a crack up....but unfortunately, it was also a race, so the task was to move forward without getting overly frustrated. For 2.4 miles I had no open water. The race was well suited for water polo players because it was head-up swimming every 10 strokes or so. I ended up on the inside, scraping the buoys as I went by. I wrestled with the same half dozen swimmers the whole way, but stayed calm. It was a bath compared to lifeguard tryouts in 54 degree water without a wetsuit.

When I got out of the water I was thrilled to see 1:18, a PR! The wetsuit peelers stripped off my wetsuit in a flash and I walked to the transition area and got ready to ride. I saw my husband, Chris, for a millisecond before getting on my bike. Right away I had to stop to secure my water bottle then off I went. I turned the corner and...

WHOOOOOOSH! The wind nearly threw me over. The vast desert sky was brown with dust as far as I could see. Known for its wind, I knew this day would be a doozy. So I geared down again, and again, then later on again, and pedaled along. The hordes that passed me were faster, but the only reason they were behind me in the first place was because I outswam them. Ha! It didn’t mean diddly. The ego battles that raged in the early miles would evaporate with the reality of the day.

The out and back course went gradually uphill, then back down after the turnaround.  The desert was beautiful. Off in the distance the red rock formations cast mysterious shadows in their clefts, which changed with the light throughout the day. Yellow wildflowers were in bloom and distant mountains graced the horizon. All that aside, it was a huge relief to turn around and have the wind at my back for a while. Many people coasted down the grade, but I took the opportunity for effortless speed, put the pedal to the metal and, within my set heart rate, zoomed down the hill. It was a short reprieve. The wind fought us again a few miles later.

The turnaround in town was across the bridge we had swum under earlier. The water sure looked inviting...

The second loop was the meat of the thing. I decided that it would be “the best loop” (playing mental games again) and carried on a conversation with a photo of my sister-in-law, Sue Ellen, which I had taped to my handlebars. Sue Ellen is fighting cancer, and her struggles make my race effort seem puny. All of my races have been dedicated to her since her diagnosis.

By loop three, the shine was off and reality hit. By then, people were already running the marathon. I still had another two hours of riding and geez, it was hot! I was almost glad I had another loop on the bike. Perhaps it would be a little cooler later on. Things were downright bleak on the course. With the hot shots running already, only the wannabes were left. There were people at the side of the road changing flats, some lying down, and some staggering around. At the turnaround, the pickup truck full of bikes told the tale that some had called it a day. It was a long trip back to town. I underwent lots of shifting and stretching and trying to get comfortable in the face of fatigue with the marathon looming.

It felt sooooo good to get off the bike. It felt sooooo bad to walk those first few steps. I was ushered into the transition tent to change into fresh clothes for the run. It was a war zone in there. The desert was the clear victor over the exhausted women who sat limply in chairs, gathering themselves for the next task. The ego battle was long over. The reality of the exertion still to come hung like a black cloud over us. It took a while to get changed and it was hard to go back outside and start moving again. Man, it was hot—about 93 degrees. A side stitch tore into me and hung on for eight miles. My heart rate was way higher than it should have been, so I slowed down and took walk breaks more frequently. By the second loop of eight miles, I realized that I wasn’t standing straight, so I lifted my chin and aha! The side stitch disappeared. I was able to go a little faster, but was frankly cautious about my speed.

By then I had seen my share of casualties and I really REALLY did not want to join the ranks of those suffering souls with the dry heaves on the side of the road. I kept my pace conservative and made sure to get calories, fluid, and ice at every aid station.

Sometime during the second loop, a toad jumped onto the sidewalk right in front of my feet and I nearly squashed it. I cried out and pointed, but the guy next to me eyed me suspiciously. He couldn’t understand me because my voice was so hoarse. When I pointed down, the toad was gone. Had it really been there?

It got dark. Despite all of the gadgets I was wearing, I had no idea how long I had been out there. One watch was solely a countdown alarm for my walk breaks. I could no longer see the display so I counted seconds to estimate my one minute walks. I had forgotten to start the timer on my heart rate monitor, so it was no help either, even when I could see it. Both devices were equipped with lights, but I had never needed them before and I was not about to start fiddling around with buttons right then. I had no idea how fast I was going, what time it was, or if I would be anywhere near my expected finish time.

It was no picnic for Chris, either. The miles were poorly marked and the course went the direction opposite that on the course map. Between that and the failure of the computer tracking system, Chris had no idea where I was on the course. The data reporting was delayed and in some cases non-existent. Friends that were tracking me via the internet all suffered untold agony when my run splits stopped appearing. They had visions of me sprawled out on the course somewhere, unable to get help and, no doubt, unable to finish.

Race to the end

Somewhere around mile 22, I heard someone say it was 9:42PM. I couldn’t believe I was still close to my expected finish time. I picked up the pace, hoping to finish by 15 hours. Had I done the math, I would have realized that it was not possible for me to cover the remaining distance in 18 minutes, but math did not exist in my universe just then. I was careful to continue taking in fluids and calories, but I ran the last few miles straight through with no walk breaks.

As I neared the finish, I pulled away from the groups of people that were just walking it in. I left dozens in the dust. As the lights grew closer I heard the announcer and I could hear my breathing deepen with the excitement. When I got to the finish chute, there was a moment where I was suspended in time, like in “The Matrix.” There was no one near me so I had the moment to myself.

The stands were overflowing. There was no pain, only elation. I didn’t even cry! I saw Chris and made sure to give him a high five, then slapped the palms of the kids that lined the stands. What a moment!  It was even better than I imagined. It takes my breath away just to remember it.

When Chris came over, I fell into his arms and the tears came with a deep shudder of relief. We just stood there for a moment letting all that had brought us there soak in. It was the moment of victory after what had been a long path for the whole family.

It was really hard to get into the truck to get back to the hotel. I gave it all to the finish and boy I felt it then. I was a little nauseous during the ride back to the hotel, but that passed in a few minutes. I was so happy to get into bed with my Tylenol. The thing that hurt the most was my toes, of all things—they were throbbing so bad I had to get up later and take two more Tylenol (and a Snickers bar) before I could finally sleep.

The final toll was one small blister on my foot and one on the palm of my hand. I wore an Under Armour long-sleeved shirt on the bike, so I avoided sunburn. I have been a little sore, but not much. My cold is hanging on and I am waiting for my voice to return. I slept VERY well. When I walk past my bike in the garage, I can’t bring myself to look at it yet, except for the IRONMAN race number which is still attached. That brings a smile.

My finish time was 15:17. I placed in the middle of my age group. I raced as an Athena, which is women over 160 pounds, and they have not yet posted those results. I was probably in the top 10 of that division.

Regrets?
My only regret was that I was not able to talk to all the other athletes and their families before, during, and after the race. The bonding that went on was really touching –much different than at the short races.

I don’t know if I will do another Ironman. Not for a while, at least. It was a big effort for the entire family and we all need to recover and be “normal” for a while.

Thanks to all of my friends for your support. I never felt alone out there because of all of you. I will keep your emails. I hope you will not be shy about asking for support when you need it in the future. 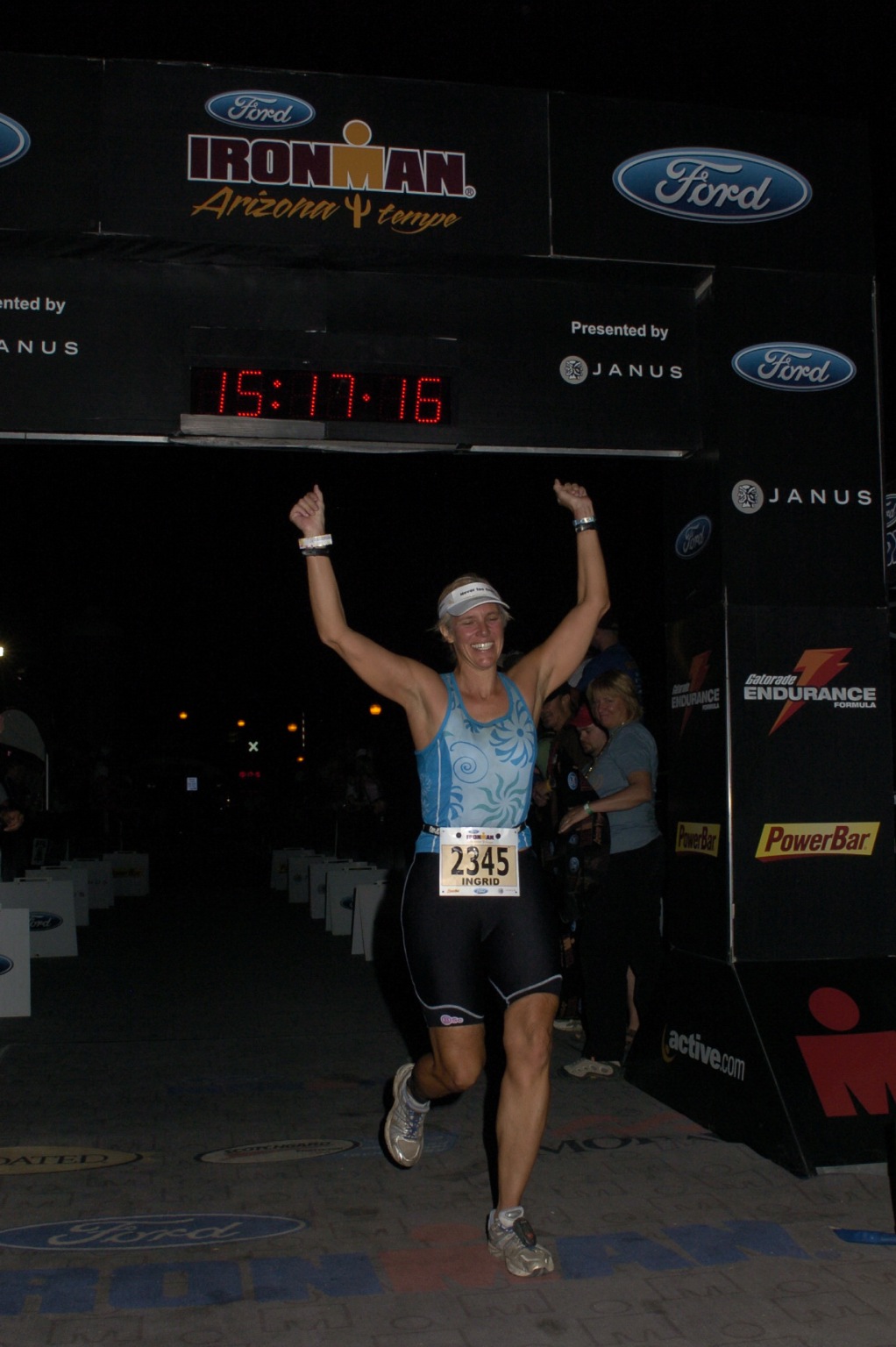 Author of the latest in the Ironman Series of books,
"Ironplanner: Iron-distance organizer for triathletes", USAT level 1 coach.

Author of the latest in the Ironman Series of books,
"Ironplanner: Iron-distance organizer for triathletes", USAT level 1 coach.