Fighting Obesity One Race at a Time

I knew I needed to make a commitment to a lifestyle change. Encouraged by other weight-loss surgery runners, triathletes and even Ironmen, I set goals to become an active triathlete.

“It is not the critic who counts: not the man who points out how the strong man stumbles or where the doer of deeds could have done better. The credit belongs to the man who is actually in the arena, whose face is marred by dust and sweat and blood, who strives valiantly, who errs and comes up short again and again, because there is no effort without error or shortcoming, but who knows the great enthusiasms, the great devotions, who spends himself for a worthy cause; who, at the best, knows, in the end, the triumph of high achievement, and who, at the worst, if he fails, fails while daring greatly, so that his place will never be with those cold and timid souls who knew neither victory nor defeat.”

Teddy Roosevelt, speaking at the Sorbonne in Paris, April 23, 1910

This famous quote has more meaning and importance to me than I could ever explain.

In July 2008 I weighed 470 pounds. I knew I probably would not live to be 40 years old unless I did something soon. I decided to have gastric by-pass surgery. Weight loss surgery is not a solution to obesity, yet it was the right tool for me. I lost weight with the surgery, actually a lot of weight. But as my dad always told me growing up, "Use the correct tool for the job and use that tool correctly!" I knew I needed to make a commitment to a lifestyle change. Encouraged by other weight-loss surgery runners, triathletes and even Ironmen, I set goals to become an active triathlete. I know that triathlon has saved my life and allowed me to make that lifestyle change. 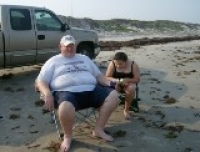 I have really been looking forward to this moment in my life when I would finally become a triathlete. Just last July my wife took a picture of me at the beach where I weighed 470 pounds. On June 28, 2009 at my first triathlon, the Y Freedom Tri in Pearland, Texas I weighed 220 and was in the best shape of my life by far. I slept pretty well in the motel room. I woke up at 4:00am and trying to keep my breakfast as close to what I eat before working out as possible, I ate a small breakfast and drank about 32 ounces of water. I drove the 20 minute drive to the pool and stayed much calmer than I thought I would. I got to the body marking area where I was marked with my bib number 348. I then had my bike and helmet checked and I went into the transition area to get set up. I was definitely one of the 1st ones there.

My nutrition plan was to take a gel five minutes before the race that started at 7:00am then take another one 45 min to an hour after that. That 1st gel may have been a waste because the race got started a little late and when you are bib 348 and there is a 10 sec delay between swimmers, it takes a while before it is your turn. When it was finally my turn, although the swim was the event I was most apprehensive about, I was gliding on the water. It was awesome, until I had to pass. There is traffic coming both directions and in NASCAR terms, we were four wide at times. I passed several swimmers and was not passed. My official time was 8:04! I felt awesome!

I jogged to T1 then took my time putting my socks, shoes, helmets and sunglasses on. I spent too much time there, but I was just trying to have a good time, and not forget anything and relax. I got on my bike and dagummit if I couldn't get my left foot in the basket on the pedal. The pedal kept spinning and I have never had that trouble before. I kept going about a 1/2 mile really slow until I got my foot in. I got passed by one racer while I was going so slow. As I was going, my bike computer wasn't either. That's what I get for not checking the magnet in the morning. Anyways, I started riding and it was awesome. There was very little wind and it was a very flat course. I started passing people like crazy. I couldn't even count them, but I did notice I was passing bib numbers in the mid to lower 200's. Training in the south Texas gulf coast winds definitely has its advantages.

My ride was spectacular even though I ride a department store Schwinn Prelude model that is meant for someone about 6-8" shorter than me. Oh well, this bike will have to do till I have saved up enough for a bike that fits. I was making sure to thank the volunteers and the police officers for controlling traffic as I passed them. They were awesome. The last 3.5 miles I decided to push hard as I looked at my watch and knew I could have a sub 40 bike split. Perhaps even 'way' sub 40. About 2.5 miles from the finish, I looked at one of the police officers to thank him when BANG, I ran right over a raised reflector speed bump type device. I had avoided all the others the whole day. You had about 3 inches or less to miss them, but I took my head off the road for a second and nailed it. This damaged the back wheel and flattened the tire. I was devastated. I got off the bike for what seemed an eternity as riders started passing me. I wanted to cry. I didn't know what to do. It was my back tire and there was no time to change a flat, then I realized I couldn't change it if I wanted to since I did not have a quick release nut on the rear wheel. I was determined to finish the race. Today I was "daring greatly."

I got on the bike and rode a damaged wheel with a flat tire the remaining 2.5 miles. I was at a snails pace. Now I was upset. I was being passed by several. I got back to the transition area and took off my helmet, put on my race belt and took off. That's what I get for racing to compete a little rather than to complete. The run was ok at first, but the bike thing was still in my head, so I pushed it a little hard that first mile trying to make up time. After the first 1.5 miles I walked. I walked a lot, maybe even a mile or more. I decided that I needed to enjoy the atmosphere and not try to make up all that lost time on the run. I finished the race.

My primary goal was to finish the race with a smile on my face - I hope I did that. I decided that if I was going to reach a certain time goal for my 1st one it would be 1:45. When I swam on the Friday before the race, I thought I could possibly go sub 1:30. That didn't happen, but I had a blast and I am officially hooked. When I crossed the finishline there was still a little disappointment, because I know I could have gone at least 15 minutes faster. But then I stopped worrying about it and did what some friends have kept telling me to do, enjoy it. Thanks guys. Later I was sitting in the bleachers as the last runner finished, a 68 year old inspiration, when it finally hit me. I started bawling like a baby. I finally did it. I have done something that I never thought I could or that I would, and I had a pretty successful race for the most part. I was proud of myself and my accomplishment. I was sad that my wife and kids were not there to witness it with me, but I definitely understand. I am tearing up, just remembering those feelings after the race. I can't wait for my next tri in New Braunfels August 2...with an open water swim!

I will continue fighting obesity one race at a time and have made it my mission to encourage others to do the same. I hope my journey might inspire others to become active in whatever form they choose, but most importantly, I challenge you all to “DARE GREATLY! 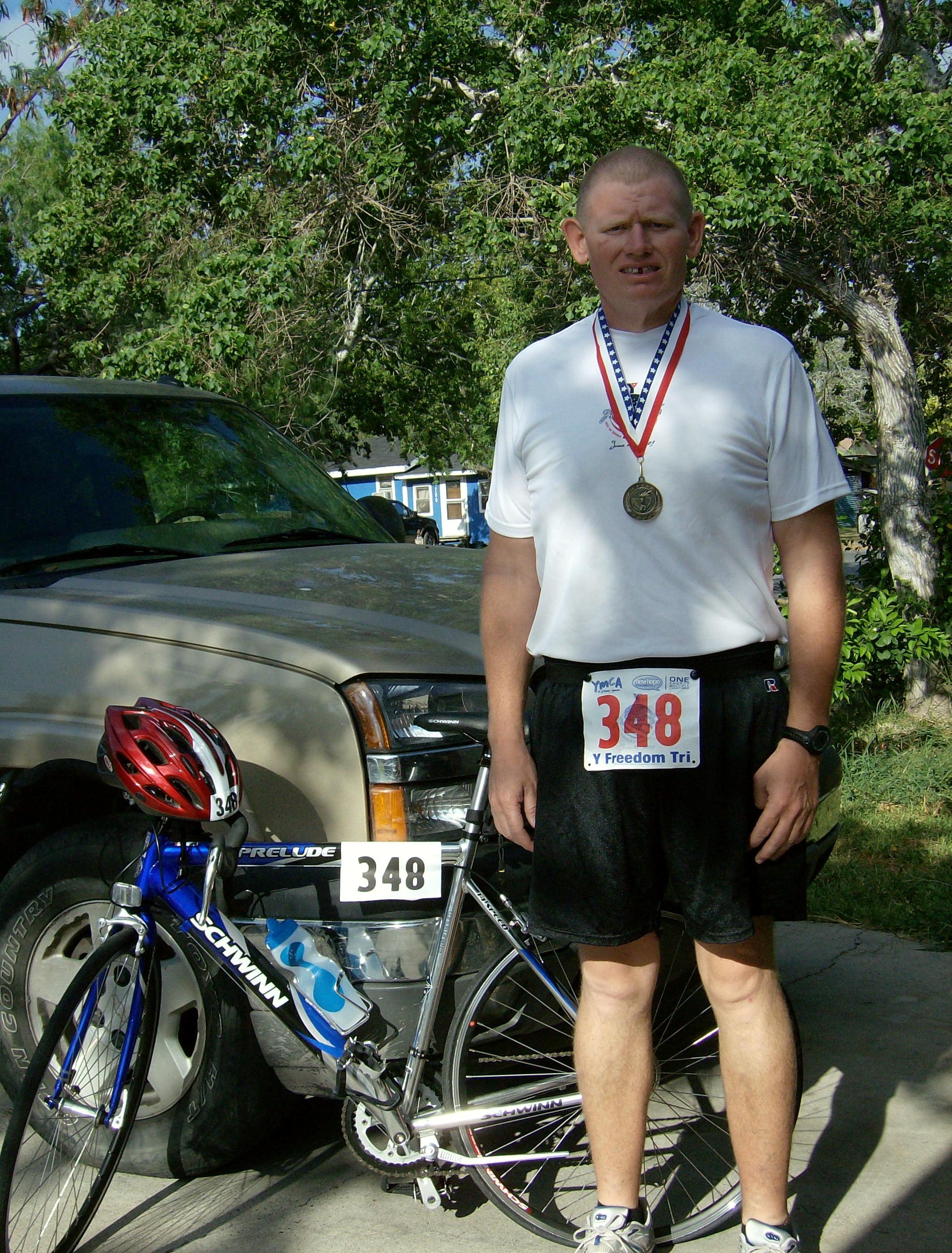 I will no longer be a spectator, a dreamer, a wonderer!
I am a doer! Not only a goal setter, but a goal achiever!
I will lead by example rather than word!
I will “DARE GREATLY!”
-Darrell Hesseltine-
Rating