This year I trained for and completed my first Olympic distance triathlon. Prior to this, I had completed a Sprint. I learned many things on my journey to this Olympic and wanted to share a few.

“I don’t care how wet you are, I still want to give you a big hug” were the most gratifying words I ever heard.   After finishing my first sprint triathlon in 1 hour and 33 minutes in Long Branch, NJ those 16 words from my 10 year old daughter have contributed greatly to this insatiable addiction I now have for participating in tris.  Training for and finishing the Seven President’s Park Sprint Triathlon was a very rewarding experience especially considering that only three months prior I was not even able to swim three laps in a pool.  When I was done, I immediately wanted to do more.  I was so hooked.  My appetite was not to go faster and compete for a better finish because at the age of 40 I knew I would never win.  I knew nothing about age groups at the time.  Instead I wanted to go for longer distances and see how much I can push my personal endurance.  I wanted to be able to check off Olympic, Half-Ironman and someday the holy grail - KONA on my bucket list.

With no events to train for in the winter and to take a break from constant swimming, biking, running I got myself the P90X program from Beach Body.  All my friends know how I feel about Tony Horton because P90X is all I would talk about for the entire off season.  What a fantastic program!   The program was incredible for building my cardio endurance because not only are you weight training but you are doing so at a very intense pace.  Anyone that does the full 90 days will come out better prepared for the rigors of triathlon training.  Ok, enough of the P90X commercial.

With the sprint tri behind me, it was time to find an Olympic Tri within driving distance for the spring.  I tried very hard to get a friend of mine who also completed her first Sprint in ’09 to join me but after reading some race reports she said it would be too difficult for someone who has never done an Olympic before. (I should have heeded her advice…more on that later.)  With a room at the Sheraton reserved, my USAT membership paid for and registration complete it was off to find a training plan and start getting ready.  The training plans on www.beginnertriathlete.com are awesome.  I imported one and started training on January 3rd.  I finished the race yesterday with a total time of 3:29:26.   I’m still in shock, amazed and giddy over the fact that I did finish.  This could not have been accomplished without the support and inspiration from family and friends for which I am forever grateful.  I did learn many lessons along the way to this accomplishment.  Hopefully some of these can change the results of many readers that are going from Sprint to Olympic or even Couch to Sprint in the near future.

Pick you weakest sport and concentrate on improving there.  If you don’t, then your performance in other areas during the race will suffer.   When training, don’t gravitate to the comfort of what you already do well.  During my first tri, the swim took so much out of me that I barely made it to T1 to get my bike.  I knew that I needed improvement in my swim and I made a lot of strides by spending 13 hours in the pool over 4 months.  This was less then my training plan had called for but the extra attention to my weakest link did help, both physically and mentally.

Don’t just tack on the mileage….do the drills!  I made this mistake in swim and bike training.  As the race approached I took a few lessons from a swim coach that took me through many pull, kick, speed and other drills. He made a noticeable difference in my swim and contributed to a 10% increase in time allowing me to finish a mile in under 40 minutes in training.  That’s 70 laps in under 40 minutes for someone that couldn’t do more than three this time last year.  I kind of did some drills during run training which helped me improve my pace to under nine minutes/mile but I failed to do any drills on the bike and therefore had zero improvement in pace.  Do the drills!  They make a difference.

Open water swim practice is important.  I made the mistake of doing all my swim training in a pool.  I had a couple opportunities to join swim clubs in open water sessions during my last two months of training and didn’t take advantage of it.  Even if you only do open water once or twice during your training it will help.  The pool is great to build endurance and technique but nothing makes up for the experience of being in the ocean or lake for a mile.

Race at your own pace, not someone else’s.  While its motivational to pick a faster biker, swimmer or runner and try to keep up with them,  this will burn you out.  I made the mistake from the very start in the swim yesterday.  Not only was I not fully prepared for open water but I started off at a very vigorous pace to try and keep up with the rest of my wave.  I sure did keep up for the first two minutes but was then completely winded and found myself gasping for air and swallowing delicious lake water.  I had no choice but to start swimming on my back just so I could catch my breath.  Then when I noticed that most were ahead of me I tried to catch up which was another big mistake.  Know your pace and stick to it.  I knew I could finish the swim in under the 50 minute cut off time and I should have just stuck to my pace from the beginning instead of the stress inducing mistakes that I made.  I finished the 1.5 k (.93 mile) swim in 37:46 but could have done better.

Check out the course in person before the race.  Try the bike and run course if you can or at least drive them so you know what to expect.  I tried to get out to Columbia (3 hr drive) a couple of times but something would always come up and I never went out of my way.  I should have.  Especially with a course like Columbia.  My friend’s comments proved to be very accurate.  “The run course is one of the hardest I’ve ever done. Except for the last stretch across the dam and to the finish, it’s all up and down” Is the description offered by Susan Williams, Athens 2004 Olympic Bronze Medalist.  Even though the run is my strongest of the three,  I would have spent more time on much hillier routes during training instead of the less hilly farm country back roads that I run.  After a challenging 25 miles on the bike, my quads were on fire and running up hills is the last thing my legs wanted to do.  I had to walk during many of the uphills.  I did fine on the few straight-aways and the very scenic last stretch over the dam and to the finish line but I definitely would have trained differently had I known the course better.

Don’t experiment with any liquids or energy bars during a race.  You should only drink or eat what you know works for your stomach during training.  I made the mistake of packing the energy bar that came in the goody bag at packet pickup into my shirt pocket.  After the long swim and at mile 12 on the bike course it was the best tasting bar I ever had in my life.  I was famished and it did give me the boost that I needed to finish the bike portion.  Unfortunately it did catch up to me on the run causing some stomach aches.  Fortunately it wasn’t anything that caused me to stop but I could have done without the extra discomfort and distraction.  Those hills alone were plenty to deal with.  While on the subject of eating, I would also suggest not having a big meal the night before the race.  During my first sprint and this Olympic tri we were sleeping over at a nearby hotel and found some great restaurants for dinner.   The Avenue in Long Brach, NJ and Café de Paris in Columbia, MD. The food was excellent and it was really hard to resist the temptation of having a full meal.  Well, all I can say is the last thing you want to weigh you down during the swim is last night’s delicious meal.  Save it for the celebration when you’re done.

In between your triathlon events, do other events.  This was actually one of the things I did right.  Participating in other events has helped my training tremendously.  I ran the Rutgers Half Marathon in April and the Broad Street 10 Mile in Philadelphia as well.   Not only was the physical component of these events great training but the atmosphere of being at a competitive events is awesome.  It really makes you look forward to being at the next one…and the next one…

Practice your transitions.  Most beginners, myself included, don’t care about the actual finish time for the event.  We’re just happy enough to actually finish and not finish last.  Though I must say you really start to get competitive when you see your name listed only a few seconds or a minute or two behind the earlier five finishers.  The time in transition can make all the difference between finishing 1,307th and 1,299th.  My T1 was an embarrassing 6:56 yesterday.  In hindsight I could have easily halved that and gained a few spots on the leader board.

I’m going to try and take my own lessons to heart and re-read this article weekly as I start the training for a Half Ironman next week.  I’m signed up for the Toughman.  Hope to see some of you there! 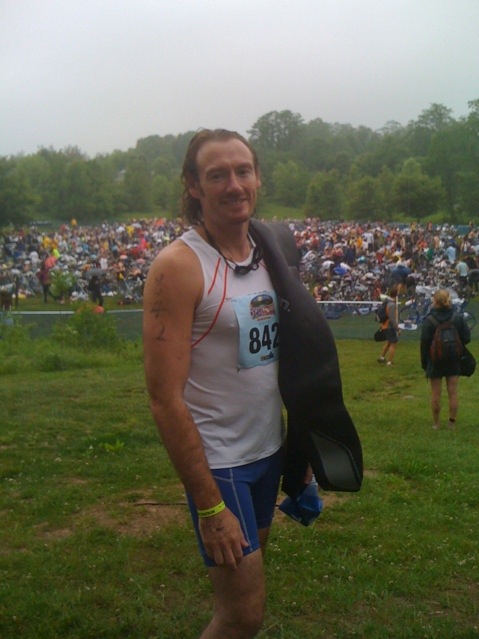 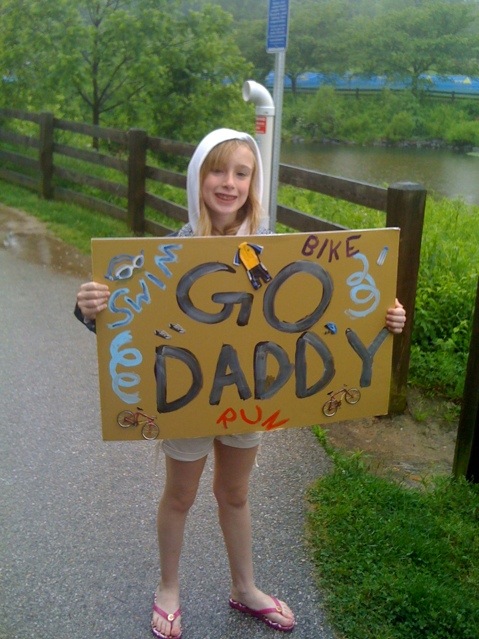 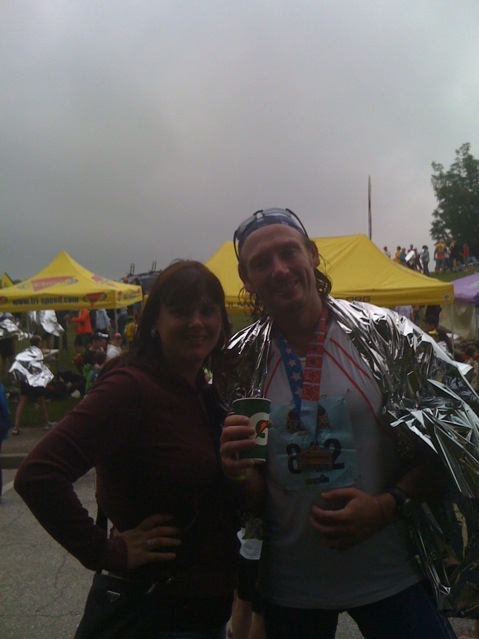 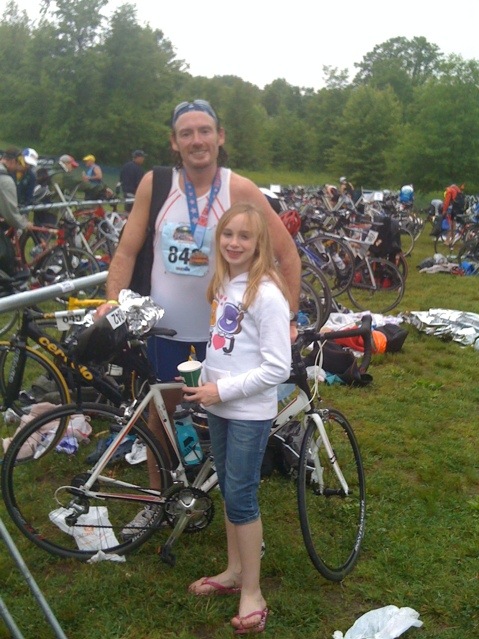