With the recent move to mounting a water bottle onto your aero bars to save on drag I decided to look at a similar setup. Here are the results of my testing of this hydration setup.

Price: $139 depending upon deals available.

For several years I have used the Profile Design Aerodrink bottle for Tri’s from sprints to IM rides. With the recent move to mounting a water bottle onto your aero bars to save on drag I decided to look at a similar setup.

The Torpedo system is a mount that can accept a typical water bottle but also comes with a bottle with a drinking straw. In theory this gives you the improved aerodynamics and the ease of use that the Aerodrink bottle gives. The mount comes with a mini-mount allowing for a computer mount to be installed. XLAB advertises the aero efficiencies of this but since I don’t have a wind tunnel to test this so I will leave that to others.

The Torpedo system comes in two models: the 400 (reviewed here) and the 100. The main differences between the two is that the 400 mount is carbon and the spacers/mouth piece are color coordinated (Red or Magenta). The XLAB site lists the 400 as about 26 grams lighter. The 400 sells for about $139 and the 100 is about $89.

Both come with a “mini-mount” that allows you to attach your bike computer. Putting together and installing is relatively straightforward. The Torpedo mount is basically hung between your aero bars by four Velcro straps. One nice feature is that the four Velcro straps have neoprene “Grippers” which help to keep straps from sliding up/down your aero bars. 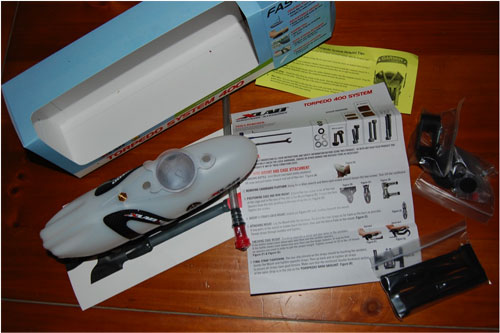 The mount and mini-mount have several screws which allow you to adjust the length. Tip: if you are going to use the mini-mount for your bike computer, stretch the mounts out as far as you can set them. Your first ride or two you will probably need to adjust to your liking. One note, after I installed this I found a helpful video on XLAB’s site that reviews the installation process.

The Torpedo bottle slides in and then clips in for a sure mount. Removal requires twisting the bottle clockwise as you pull it out - a technique I doubt many would want to try while actually riding. I did note that that you need to remove your bike computer before taking the bottle in or out, even when using a regular water bottle I ran into the same issue. A nice improvement would be to have a longer mini-mount so you can remove your bottle without having to take your computer off. This is a minor issue as you probably won’t take your Torpedo bottle out during a ride (you would just simply refil it).

While installing I was beginning to wonder how much splash I would get. Since the Torpedo mount is suspended between the aero bars I was concerned about how much I was going to be wearing my drink during my ride. I will talk more about this later.

The Torpedo bottle comes with two holes for the drinking straw position and one large opening for refilling. Two different types of lids for the refill hole are provided. One solid (with one tiny breather hole) and one slotted. Due to my concerns with splashing on rougher roads I started with the solid cap.

The system uses a flex straw with a bite valve. Actually, the instructions state that you don’t need to actually bite the valve - simple pressure from your lips should suffice. In testing I found that this worked fine. One thing that XLab touts is that the bite valve keeps the fluid in the straw. The first time you drink, the fluid is drawn up and when you release the fluid stays. Next time you drink you get instant drink - no air.

The last point on the straw is that XLab supplies a “Dolphin Tail straw retainer” that allows you to fold the straw down. This keeps the straw out of your face and according to XLab “Saves up to 100 grams of straw drag”. In use I found that unclipping, drinking, and clipping, all with one hand, to be a bit much. After a ride or two on the trainer (due to bad weather) where I did some fine tuning of the straw length it was time to head out on the road. I had my wired Power Tap set up and I was off. I had feared that the suspended bottle would bounce around too much and splash drink everywhere. But that never really happened. On a very bad stretch of road it did bounce around some but didn’t splash. I readjusted the straps a little (by pulling the two front straps at the same time, then the back) and went back over that section and it was fine. I was using the solid cap and suspect that using the vented cap may have allowed some splashing. I initially tried drinking from the straw then folding it down but since it required taking my hand off the aero bars, folding down then reversing when I wanted to drink I gave up on that. If you are going for every advantage I can see folding it down to reduce the little bit of drag but I suspect many will simply leave the straw up during rides.

Overall the Torpedo worked well for me and will be on my bike for some upcoming races. In training rides it has worked well. Installation is just a little more complicated than most water bottle installs but if you have any questions the online video is very helpful.

As for the difference between the Torpedo 400 and the 100: if you are really concerned about the little bit of extra weight, prefer the look of carbon, or like the color coordination better and don’t mind spending the extra money then go with the 400. Otherwise save yourself the $30-40 and go with the 100. Either way you won’t go wrong with this system.

For more information on this product, go to XLAB.