A pull buoy is an excellent tool to help any level of swimmer improve their technique and power. When used correctly and regularly, the buoy can build core strength and stroke consciousness.

Pull buoys are a great tool in the swim cabinet for beginning and advanced swimmers alike.  These floating training devices can be used in a variety of formats and functions to both aid and advance a swimmer’s ability. For simplicity’s sake, I’m going to concentrate on its use in the freestyle stroke, as it is the most common.

When choosing to purchase a pull buoy, I would recommend any of the soft foam, formed versions over the two cylinders and a rope type. If using equipment available at the local pool there is not an option of the soft foam formed buoy, make sure that the rope is adjusted so the buoy nestles comfortably against the legs, but does not move or wiggle as one strokes down the pool. 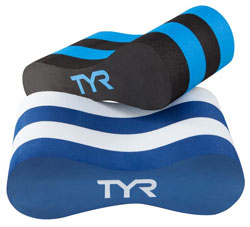 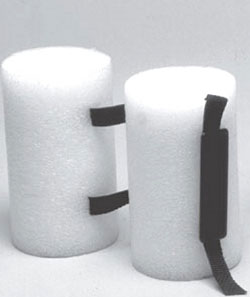 The Functions of a Pool Buoy

The basic function of the pull buoy is to allow the legs to float without kicking thus letting the swimmer focus entirely on their arm strokes. The buoy should be as high as is comfortable between the legs and the swimmer should not attempt to kick. Kicking with a pull buoy in place often leads to a habit of kicking from the knees so that the buoy remains in place. If it is found that the legs are dragging with the buoy in place, recheck the head and torso position and see if the problem can be corrected through rebalancing.

Beginning swimmers, especially triathletes who race with buoyant wetsuits, can become too dependent on the buoy to keep their body position, often posing the statement “I don’t kick during a race, I don’t need to in my workouts”. Using the buoy should really only ever take up 30% of the workout at the most; swimming should take the majority of the time and distance, while kicking, pulling and drills should generally be in the minority. A good body position without aides is the foundation for a fast and efficient swim, but using those aides can help the body learn what that position feels like.

Swimming with the buoy does allow the swimmer to concentrate on their arm stroke and rotation. With the extra buoyancy, a swimmer now has extra energy to focus on the catch, pull-through and finish of the arm stroke. Because the feet are now still, the body rotation becomes dependent entirely on core strength and can show inefficiencies in the swimmer’s form. Be sure that the rotation occurs around the spine like an axis and the feet don’t waggle side to side behind the body like a shark’s tail. Keep the core engaged and work to be on the edge of your body as you pull through.

After mastering swimming with just the buoy, add in a pair of paddles. Newer swimmers should begin with smaller paddles - not much bigger than the hand and work up to something 1.5-2x bigger. Remove wrist straps (if owned, not borrowed) as these can enforce bad habits such as a dropped elbow or not finishing the stroke.

To add a different layer of difficulty, add a band to the ankles. A band keeps all movement of the legs to a minimum and truly drives home the core stabilization needed to keep the body up and moving forward. Once that proves too easy, bring a hand towel and wrap it around the band, letting the excess flow behind. The extra drag will require more power to keep moving and build strength in the arms and core.

Another drill to do with the pull buoy is to switch its position. Place the buoy between the knees or ankles to create a different feel and balance to work with. These can be done with or without a band, but using a band with the buoy at the ankles is actually making it easier.

A pull buoy is an excellent tool to help any level of swimmer improve their technique and power. When used correctly and regularly, the buoy can build core strength, stroke consciousness and an appreciation for a consistent kick, leading to a stronger and faster swim.

Leigh Dodd is a USAT Level I Coach with D3 Multisport and the University of Colorado Triathlon Team, a triathlete of eight seasons with National Championship experience and a swimmer for over two decades.