Battling nervousness and limited training for a surprisingly good finish

This story starts way back in December 2009 but I won’t bore you with nine months of training details and other sundry details.

I’ll start this story on August 27rd, 2010.  That is the day I resumed my swim training after a hiatus of about three months.  Yikes!  I joined a fitness center within two blocks of work that has a pool.  So between August 27rd and September 12th, I got in exactly four training sessions in the pool.  My longest swim was 1,500 yards.  My triathlon distance was 1,500 meters.  Close enough for me.

I knew I could complete the distance in a pool; however, swimming in open water is quite daunting.  Especially in water with zero visibility.  I should note that I did swim in the Delaware Bay once in July and once in August.   Those swims are stories in and of themselves.  Just imagine jellyfish, other swimming things, and suspended organic matter.

Just gives me the shivers thinking about it.

I was pretty nervous during the three weeks prior to the race.  I'm not sure exactly what spurred this, but my tummy would do a little flip-flop everytime I thought about the race.  I think a large part was due to the logistics of everything.  There was picking up my packet, figuring out where to park during bicycle drop-off, figuring out how to get to the race on race morning, picking out race clothes, figuring out socks, learning about the ‘transition,' wondering how I’d get home, monitoring the weather, monitoring every little sniffle and sneeze ... the list goes on and on and on.

My friend (a friend from work) was also signed up for the race, and about a week before we discovered that we were in the same "wave."  Wave 19 to be specific. We would start the race after 18 other groups had started.  Yeah!!! I’d have a companion to hang with during the morning.  One who was even my age and has many of the same ‘getting old’ issues that I do. She was a seasoned triathlete and answered question after question prior to race day.

Still, the Sunday night before the race (my race was on the following Sunday), I tossed and turned with race jitters.  They stayed with me the whole week!   Flip-flop, flip-flop.  That was my stomach letting me know how nervous I was.  My husband was encouraging, but that did little to ease my tension.

Race weekend finally arrived.  I'd completed just six swims over the course of four months and biked no farther than 10 miles in one session, but I did run consistently over the long, hot summer.  My bike commuting (almost 100 miles/week) contributed greatly to my fitness level.  My runs were efficient and focused.  I was ready for my first tri!

I picked up my race packet Friday afternoon.  This consisted of going downtown - something I rarely do - to get my number, swim cap, shirt, and the all-important race wristband.  The race band gets you everywhere on triathlon day.  Only competitors are allowed where the bikes are on race day - and competitors have the race bands.

Saturday afternoon we headed down toward the Lincoln Memorial to drop off the bicycle.  My trusty, weathered, well-worn (and old) Trek.  The Trek was placed amongst hundreds of shiny, high-tech, and sleek bicycles.  I spotted an older bike here and there.  A few of us were newbies, at least.
After the bike drop-off, my husband and I went down to the swim course on the Potomac.  Yes, the Potomac River.  The swim course was just off the Lincoln Memorial and actually went under the Memorial Bridge.  Athletes were taking a practice swim.  I figured, "Why would I want to do that? Get exposed to less-than-clean water more than once? No way."  But I am glad I went down to check things out.  I felt much, much better after that.

My husband dropped me off very, very early on Sunday morning for the race.  I was at my bike by 6:00 am or so.  Of course, I was actually awake at 3:30 am because ... well ... I just was.  A light drizzle filled the air.  This light drizzle became a steady downpour over the course of the morning. The early morning.  Before sunrise. And through sunrise. And, as it turned out, through the bike portion. I would be a prune by the end of the day.â€¨â€¨

Slowly but surely the athletes poured in and set about getting their tiny transition area ready.  The transition area (TA) is where the switch between legs occurs.  Transition 1 (T1) is between the swim & bike and T2 is between the bike & run.  Coming out of the swim you must put shoes & helmet on and then get your bike.  After the bike portion, you must rack your bike and head out on the run. People really work to minimize their transition times by carefully setting out their gear and putting it in a certain order. 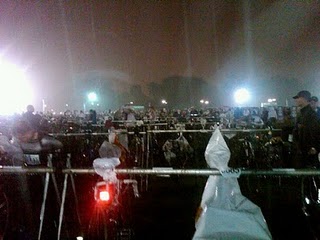 Everything got wet in the TA, even if it was covered by plastic bags.  To make matters worse, the TA was in a softball field.  My bike was in the middle of dirt.  So I became a wet and muddy prune.

Tick tock, tick tock.  I found my friend and we waited.  At 6:55 a.m. everyone had to exit the TA.  At this point I was looking very fashionable in my bathing suit, old long sleeve shirt, and handy-dandy $1 plastic poncho. We did some more waiting ... and waited some more.  The spells of waiting were broken by random trips to the Porta-Johns. Thank goodness I remembered old flip-flops.

Then I really began noticing that everyone, yes just about EVERYONE, seemed to have a wetsuit on. Did I have one on?  Nope.  Just me and my shortie tan lines and my bathing suit.  Apparently a wetsuit makes the swimming portion easier since it helps you float.  I had that sinking feeling.  What did I get myself into?  Is this just the first sign of how unprepared I might be?  More waiting with everyone in wetsuits.  I'll be truthful.  I did see a handful without them.  My friend didn't have one but she did have a cool 'tri-suit' on.  That's the lingo for special triathlon shorts and top.  Me? I just had your basic one-piece swimsuit.

Finally, our wave gathered together in our neon green caps (I really liked the pink ones) and we slowly moved towards the swim dock.  My wave consisted of women in the 45-49 age group, so we all gave each other words of encouragement.  Many wished for hot toddies or margaritas.  At this point, me & my goose bumps just wanted to get started.  Then ... we did! It was into the water with just a bit of time to adjust goggles ... and then the horn sounded.

I was suddenly amidst a wildly splashing mass of green caps, arms, legs, and feet.  There was the sensation of movement all around.  But I could not see!  There was zero visibility in the water.  I'd be running into someone without warning, or they would run into me.  I could only see by breathing to the side or lifting my head out of the water.

So here's the rest of the race... in stream-of-consciousness mode:

Oh crap, where are the damn buoys?  Why am I so near that kayak?  How long have I been swimming?  Oh no, I forgot to start my watch.  Only at the 300m mark?  Geesh.  Why can't I swim straight?    I have to go under the bridge?  What if I hit the concrete piling thing?  Where are the damn buoys?  Wish I could breathe on my left side.  Thank God I know how to breast-stroke.  Ouch, that kick in the boob really hurt.  Wonder if my goggles will completely fog up by the end.  Only at the 800m mark?  Ready for this to be over.  God, the guys in black caps are fast and big.  Thanks for swimming over me.  Why can't I swim straight?  That girl is swimming sideways.  OMG, really ready for this to be over.  Where are the damn buoys?  Finally, the last turn.  Goggles are really, really fogged.  Can't see.  Where the hell do we get out?  Thank God that's over.  Run by the camera and give the thumbs up.

Okay, so that wasn't too bad.  Wonder how long my swim took?  Oh right, I forgot to start my watch. Keep pedaling, steady pace.  Try to pass a few people.  Hmm.  There are lots of people passing me. That's my friend who just passed me!  I'll try to keep up.  No.  Not a good idea.  I should get a bike computer.  Streets are quite nice devoid of cars.  Those are some nice bikes.  Wish I had clip-ons. Keep pedaling, steady pace.  Should I try to go faster?  No, you don't know what that will do to you in the run.  This is a fine pace.  Pedal.  Wish I'd looked at the map.  Wish I had some padded shorts. Can't get comfortable.  The seat just isn't in the right place.  Try moving your butt back.  No, forward.  OMG.  My 'girlie-area' is not VERY HAPPY RIGHT NOW!!!!  Where are the damn mile markers and how far have I gone?  REALLY, REALLY NOT VERY HAPPY.  Wonder if I'll get a yeast infection.  Wonder what Potomac water might do to things down there.  Wonder how much Potomac water I accidentally swallowed. Don't think.  Have some Gu (that's a sports nutrition thing).  13 miles!!! That's all!!  Oh crap.  Look at all the people passing me.  Catch up to her.  Hunker down.  Pedal.  Pedal.  Get it in gear.  You can do this.  Your legs are really fine.  You're in good shape.  Pedal.  Where is the end?  There.  Good.  Get ready to run.

That's my race!  I couldn't find my friend.  I received my preliminary race results just beyond the finish line.  I was very, very pleased.

This is what the transition area looked like at the end. 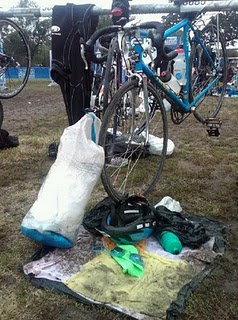