Over the years I have had several MP3 players, including an early generation Shuffle, but it has always been used during running.  While I don’t run with music that much these days, I have often wondered if it would be worth the cost (and potential hassle) to have a waterproof MP3 player for swimming, mainly for longer sets. 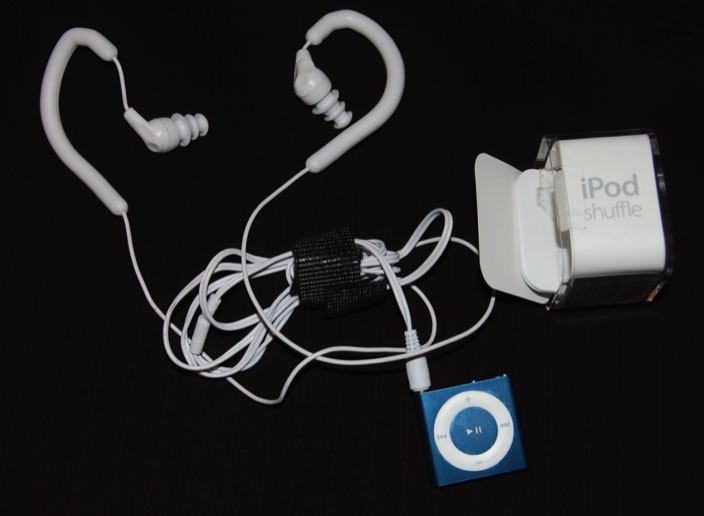 Figure 1 – AudioFlood’s waterproofed iPod Shuffle with waterproof headphones and original Apple container.  Not pictured are the standard Apple headphones that come with the unit.

Now to the actual review:

AudioFlood took a unique path for their product by actually making the Shuffle itself waterproof as opposed to making a waterproof case.  There is no special case or covering over it.  In fact, just by looking at it you cannot tell that it is anything other than a standard iPod Shuffle.  So after receiving it in the mail and loading some music onto it I decided to take it on my run just to try it out.  Using the waterproof earphones I changed to a smaller set of ear buds and I was off.  Since it was mid-day, mid-summer run in south Louisiana, it was going to be a hot and sweaty run.  The iPod worked fine and my only complaint was that the sound quality of the headphones was not what I was expecting.  I like a little more bass and it seemed to be lacking bass but more to come on that.

Next day I took it to the pool for a swim.  Since I have never swam with a MP3 player I lost some valuable time getting this setup.  Seemed like such a simple thing: turn on player, put in swim cap, put on swim cap, put on headphones, then swim.  Right?  Well not quite right at least for me.  AudioFlood includes a Velcro strap that I didn’t bring along to tie up the excess cord which would have been helpful.  Instead I was trying to stuff the cord in my swim cap.  Trying to get the unit and the cord in my cap, earphones on etc., just seemed to be a chore.  Once I did manage to get the cord in my cap, headphones on and started swimming I kept having the ear buds coming out or I would lose the sound in one ear.  The waterproof headphones come with a plastic piece that wraps around your ear to keep the headphones in place but they weren’t helping as much as I needed.

After the swim I was about to reach out to AudioFlood for a solution when I decided to give the unit another try but this time I worked to make sure the ear buds were fully inserted in my ear.  Success!  Not only did they stay in place but the sound quality was much better.  Now I could swim, listen to music as long as I wanted.  I could push any of the buttons (even underwater) and they worked fine.  In retrospect I have always have had problems with ear buds as they all seem a bit big for my ears.  I have since been using this setup with no problems during swimming.

Additionally I did a few more tests which included dropping the whole thing in the pool and turning it on underwater.  Also, I allowed my kids to try them while they were in our backyard pool with no ill results.

My last note is on the concept of swimming with a MP3 player.  I wasn’t sure about the concept ahead of time as I do like the quiet of swimming and it gives me a time to reflect.  As it was, I found that for longer sets an MP3 player provides a nice distraction and the time passed quicker and I enjoyed having music.  Shorter sets where you are doing drills or speed sets I didn’t like having the music.  I am very lucky that during my swims I rarely have to share a lane and probably wouldn’t wear it when sharing a lane or during sessions such as Masters swimming.

I think the highest praise I can give them is that it works like any other iPod Shuffle - even underwater.  You can push buttons, turn it on and off and not fear that it will affect your Shuffle.  AudioFlood’s website states that it is waterproof to 200 feet but I did not attempt such a test, and to be honest I am not sure why someone would, but if you need that feature it is there.  I will say that the waterproof headphones that come with it are not the most comfortable for me.  This could purely be an issue with me (and my ears) but if you are going for longer runs switching to the regular Apple earphones may be a better bet.