We test REVFIN, a reversible fin used to create drag in your swim sets to help increase your strength and endurance.

Product: REVFIN, a swim training tool that creates a “reverse fin” to add drag during swimming

There are a number of various swim training tools available and in use by swimmers.  While there use and effectiveness is sometimes argued I typically stick to swim training tools that my Masters swim coach recommends.  So when I was asked to review the REVFIN I was a bit skeptical.  Sometimes we tend to over complicate things and less (tools) sometimes can be better.  So I wondered if this was a valid training tool or just another reinvention of the wheel. 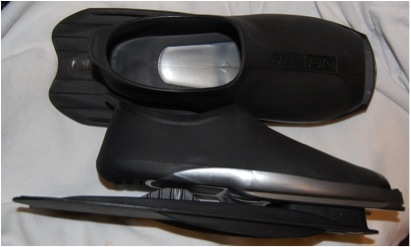 So what is REVFIN?

REVFIN stands for Reverse Fin.  Looking at a REVFIN it very much looks like someone took a regular fin, cut off the end and mounted it to the bottom of the flipper reversed.  Actually the documentation actually refers to it as a “broken flipper.”  The theory is that during swimming it adds drag to your swim causing you to work harder and improve your swim strength and endurance.  Additionally the ends can actually be removed and mounted in reverse (reverse of reverse I guess) making the fins look more like traditional fins.  But if you do get a pair of these you probably won’t use them as regular fins and I will explain why later.

So off I went for the first of many swims using the REVFIN.  The size I received was Euro 43-44 or US 9 ½ to 11.  I wear a size 9½ shoe which left the fins a bit loose on my feet which was only an issue once where I pushed off very hard and both fins almost came off.  As of this writing other sizes were being rolled out.  I did my warm-up then put the REVFINs on, swam 50 yards, and immediately noticed the drag and the weight of the fins.  While your mileage will vary I found an approximate 10-13 second increase in my 25 yard lap times.  I even noticed where I normally can stop stroking and glide to the pool edge didn’t work as the drag added stopped me pretty quickly.  So the advertised affect is real and I did have to work harder to swim those 25’s and 50’s.

These do take a little getting used to as they weigh just enough that they did affect my swim a bit.  You do have to kick or at least I did, and so did those in the sample videos, to keep my balance and keep my feet from sinking.  According to the information I received they recommend alternate sets with and without the REVFIN.  So I would do sets of 50 yards with and without which wasn’t a bad workout once you got used to the fins.

You can do flip turns with the REVFIN but you have to get used to pushing off the wall with the fins on but it’s not hard.  The reason I state this is that with the fin portion mounted to the bottom of the fin and the contact with the pool side is different.

REVFIN as a Pull Buoy

I also tested it in reverse mode or I guess in the form that looks more like a traditional flipper.  At the pool I swam a couple of sets with the REVFIN then got out the screwdriver to switch the fin to its reverse form.  One person at the pool mentioned that “if your training aid required a screwdriver at the pool it is probably too complicated” and I have to agree.  Changing over for the first time took me about five minutes with me almost dropping one of the screws in the pool.  I can do it faster now but to be truly useful the screws needs to be replaced with an easier mechanism to switch back and forth.  Once the REVFIN looked like a regular fin I went for a swim and instantly found that they did not work like a regular fin.  Per their documentation, the fin portion is a polypropylene compound that is very stiff.  It was almost like having two small boards attached to your feet and it wasn’t easy to kick.  With most fins I feel like a speed demon but I was actually slower with these then with no fins.  This could be because I don’t have a strong kick but I don’t think that is the case completely.

The fins do provide lift a little, like a pull buoy, but it does it in very much a different way.  A pull buoy adds buoyancy near the hip, even at a standstill the pull buoy will provide lift in the water.  The REVFIN provides lift at the feet and only once you start moving forward.  The movement of the water over the fins help lift up your feet and I had to work to keep my hips from sinking while my feet were being lifted.  My first wetsuit experience was with an older wetsuit and I felt a bit bent like a V with my legs and chest lifted and my hips dropping.  With the REVFIN “pull buoy” if felt very similar.

With the REVFIN I received a couple of pages of information on the REVFIN and a website link.  While the documentation reads like it was written in Italian and translated with some online software it was readable.  I would have liked to see some recommended sets or training plan other than just a couple of sentences about swimming alternately with and without.

The idea of adding additional drag to your swim is not new with products on the market including drag suits and swim parachutes.  Surprisingly I did see a use for the fin in its regular mode and can see adding them occasionally as part of my workouts.  I do not see the REVFIN as something that anyone with poor form should use.  The weight of the fins would only throw the balance of a beginner swimmer off even more.

Additionally I would not see myself using the pull buoy option as the time it takes to switch plus its lift at the legs would cause me to avoid its use.  I could see an experienced swimmer with a strong kick use the pull buoy option if they wanted to further strengthen their leg muscles.  But for a triathlete who only uses their kick for balance and some propulsion I just don’t see the benefit of the REVFIN in the pull buoy mode.

The REVFIN performs as advertised as a tool to increase drag in your swim sets.  As to whether it has a place in your swim bag is up to you.