No one likes to think of race day as being anything other than mild conditions, temperate weather, and clear skies. But of course, luck is not always with us. If triathlons were easy with perfect conditions, no one would be impressed when we finish one!

Here we share stories of drastic race day weather and what we learned. Thanks BT members for contributing!


My cold-weather story is of a half-distance race in early October in St. Louis (2014? 15? Can't remember). The swim was in the Mississippi river and the reported water temperature the day before was still 70F, so excellent! However, the night before the race the Corps of Engineers decided to drain the slough that the swim was in and so all that was left was the super cold stuff on the bottom - 52F. I had a sleeveless wetsuit on since - in those (predicted) temps would have been way too hot for a sleeved one. I didn't even get in for a warmup so I had no clue what was about to hit me, but once that first toe went in I knew I was in for a slug fest. Had the typical "oh crap that's cold" types of reactions and troubles breathing, but was able to get myself calmed down and horizontal. The water was so low that there were spots you had to walk over the sand bars.

The last 300 yards or so of the swim I could feel something going on with my knees - they just felt weird. I tried to tread water and flex them differently for a bit to no avail. Figured there was nothing to do but finish the swim, so on I went towards shore. I stood up and had instant numbness in my feet. Some lady was watching me walk up the shore peg-legged (remember I couldn't flex my knees for some reason) and she looked a bit worried. Can you imagine walking uphill in the rock/sand peg-legged and with no feeling in your feet? I was also a bit worried.

Both of my legs seized up immediately when I tried to pull my wet suit off, and I wasn't the only one. T1 was like a trauma ward - people were lying around writhing in pain, some throwing up over on the side, others still didn't have their wits about them. After about 10 minutes I was able to get my wet suit off and bend my knees a bit. The outside temperature that day was 47F so the only two ways I was going to warm up were to DNF and get in a vehicle or to get on the bike and start pedaling - somehow, my competitive drive won out over my normally very sane brain.

Luckily, I had brought a light long-sleeve to ride in. Not so luckily, I did not have any other warming items for the bike - key amongst them, toe covers. I think my feet finally thawed out by about mile 40 on the bike.

That lady that had the worried look at the beach? That was my sister. Coming out of the water I couldn't have told you that - I had no clue it was her. I think I was 10 miles into the bike before I put those particular pieces together. Talk about a "Whoa" moment!

Did I finish the half? Yes. Was it slow? Lords yes. Am I glad I finished? Also yes, but Mother Nature certainly made me earn my first 70.3 finish that day. Mother Nature, and the Army Corps of Engineers... 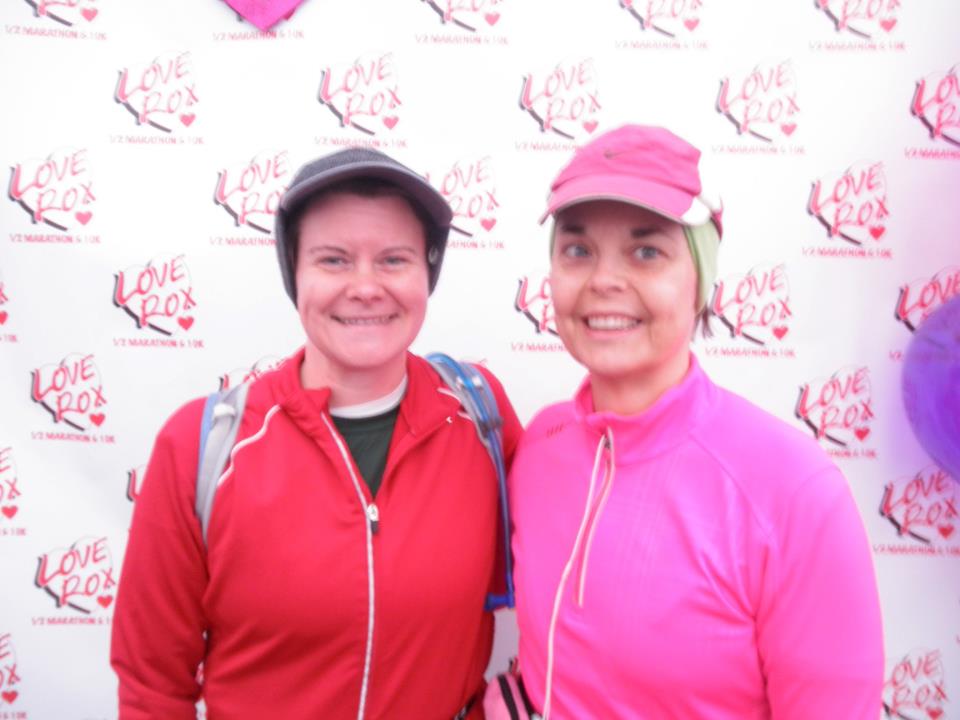 Love Rox Half Marathon.  February 2013.  I signed up for it about six weeks before the race cause it's local and my friends were doing it.  I was relatively well trained for a decent run--but race day weather SUCKED giant hairy monkey balls. Freezing rain, sleet, snow--the wintery mix of doom.  This is Richmond VA--it is NOT well equipped for sloppy weather like that.


Pre race—I tried to stay warm in the heated tent.  Not very effective.


Race: course was poorly laid out for this type of weather.  We started in a field and had multiple flights of stairs, which were crowded on the first loop.  The volunteer pool was sparse, evidently people who signed up to volunteer decided that catastrophic weather gave them a pass to stay home.  So, on top of poor planning,  it was poorly laid out and marked....And sparse volunteers to direct turns.  There was a steep down hill at the end of each loop of this (2 loop) course--it was a brick to cobblestone section in the wintry mix. UNSAFE.


The race put all its efforts into the post race party’s booze tent, which was crowded and noisy....and who really needs booze after running a HM in that weather?  We needed coffee or cocoa.


IM Lake Tahoe. It snowed the night before, frost on the bicycle seats in T1, sand numbingly cold on my feet before we went into the much warmer 55F water. Came out of the water pretty cold, air temp 34F-ish. Put on windproof shell up top, gloves, cap under helmet. I shivered pretty badly for the first 55 miles on the bike, and couldn't hold aero position while shivering. I got feeling back in my feet around mile 75 on the bike. I kept the same clothing for the run. Temps started dropping again at dusk. My core body temp held, but was dropping a bit by the end. The elevation was a factor also.

What I learned. Neoprene booties for the swim, windproof leggings for the bike, wool socks and keeping the warmer hat for the run would have made for a better day.


In my first or second season of triathlons, way back in 1999 or 2000, I signed up for an Olympic distance race at the end of September north of Chicago. The swim was in Lake Michigan.
(Lesson one - don't sign up for a Lake Michigan swim in late September.)

I didn't own much in the way of technical clothing at the time, but I did have a full-sleeve wetsuit that fit well. As we made our way to the beach for a mass start, people were wading in to warm up and getting back out quickly with worried looks on their faces. The water temperature was 52 degrees. If you don't know a lot about water temperature, you might think, "Well, a 52-degree day is pleasant enough. That doesn't sound that bad." For context, a hot tub is usually 103 degrees, water that is cooler than 98.6 degrees generally feels a little cool because it's not as warm as your body temperature, and swimming pools range from 78 to 86 degrees. So the water this day was closer to the temperature of ice than the temperature of a lap pool.

I was racing with a friend, who had borrowed a waterskiing wetsuit from someone, and it didn't fit tight enough. Water poured in at the neck. She entered the water and took a few warm up strokes, then elected to join the increasingly large group of people who were going to skip the swim and be disqualified, but complete the bike and run for fun.

I elected not to get in the water, other than testing it with my feet and hands. It felt REALLY cold.

The horn sounded and a bunch of us splashed in, including a guy wearing just a speedo.

In the first 100 yards, a lot of people dropped out and headed back to shore. I could hear shouts and exclamations and cursing, and saw people turn around. For me, I tried to put my face in the water, but all of my human instincts recoiled and I had to swim head-up for awhile. After a time, my face became wetter and more used to the water until finally I was able to put my head in. That was good, because then I could swim using decent technique.

Shortly after being able to get my face in the water, I noticed my feet and hands were growing numb. I started swimming faster, no longer caring about pacing or anything else. I rounded the buoy with the 2/3rds of the entrants who ended up actually doing the swim, and headed to shore. I was becoming a little scared about how cold I was, but I figured all of the other people around me were still alive and swimming, so it was probably OK. I was much younger then, and less risk-averse. If this happened to me today, I'm not sure I would have completed the swim.

As I stood up and tried to run up the beach, I found that my feet were completely numb. Although I could feel the impact of my feet hitting the ground, there was no sensation from the nerves of feet. I couldn't feel whether I was running on sand or grass, or gravel for that matter! I spent about 10 minutes in transition huddled in a towel warming up before heading out on the bike, where it took a long time to get warm.

I ended up having a personal best swim (because I was frantic to get out of the water!) and it was my first time breaking three hours for an Olympic tri, even with the extra time spent in transition.

Lessons learned:
I have since done more research and learned a lot about the human body's reaction to very cold water. There's not much that can be done other than repetitive exposure or being mentally ready and staying rational and present. But this experience gave me an idea of the coldest water I am able to swim in, and has helped me encourage others at the start of very cold water swims. It's also helpful to splash water on your face and even try to put your face in while standing, so that the panicky reaction can subside while your feet are firmly planted. Neoprene cap and booties would have been good, too. More recently I registered for an early October race in Ohio. Concerned about the swim, I swam the weekend before in open water with a friend and a lot of safety precautions. Luckily for me, the practice swim was much colder than the race. (The air was very cold the day of the practice swim.)