The Differences in Running Outside in the Winter Versus the Summer

How you can make your outdoor running work in any climate. 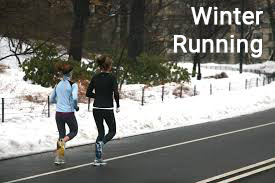 Ever been for a run outside on a cold day and smashed your PB? Or, struggled with a long run outside on a summer day? Running outside is an excellent way to build stamina and strength. Depending on the weather when you run, you're likely to notice significant differences in how you run and recover. In this article, we're taking a look at the differences between running outside in winter versus summer.


Running in colder weather can be deceiving. You may feel like you're not sweating as much or getting as thirsty when you run in winter and this can make dehydration a more significant risk. Interestingly, however, most people's sweat rates don't change in the winter — it may just feel that way. This is because when you're running your sweat rate is influenced by other factors apart from the weather including your fitness level, pace, and acclimatization. So, when you're running in winter, it's important not to neglect proper hydration just as you'd do in the summer months. Make sure you drink half of your body weight in fluid ounces daily and drink 16 ounces of fluid two hours before your run. Just before you leave, drink a further 8 to 12 ounces.


Your body will find running in winter easier.


Our bodies naturally find it easier to run in winter conditions. According to a study run by St Mary's University in London, participants ran in the University's heat lab which simulated average winter and summer temperatures in Great Britain. These temperatures were 46 degrees and 75 degrees respectively. After running three, forty-minute runs at 70 per cent effort, they found runners rated a thermal sensation that was 32 per cent higher in the cold temperatures than in the hot temperatures. This thermal sensation level means runners found a higher degree of comfort and ability to consistently sustain effort when running in colder temperatures.


Running in summer is generally harder.


Your base body temperature increases by about 10 degrees when you run. If you're running on a hot summer day, your body temperature is likely to increase to a level of discomfort much quicker than if you were running on a winter day. Add humidity to the mix, which is usually higher in the winter months, and you've got a big challenge ahead of you. The goal with sweating is for your body to cool off as the water evaporates from your skin when it reaches the air. In the summer months, however, the humidity in the air can result in sweat sitting on the surface of your skin making it difficult to cool down mid-run. Your rate of perceived exhaustion will also increase rapidly with summer running. Again, this is due to the quick increase in body temperature and difficulty in getting it back down compared to the winter months.


The differences between running outside in the winter versus the summer are primarily focused on the body's base temperature and perceived rate of exhaustion. Depending on what kind of climate you're used to, cooler weather or slightly warmer weather may suit you best. The key with making the most of your running, no matter the climate, is to make sure you're adequately hydrated and fueled and wear appropriate clothing for the climate.


How To Run And Train Through A Hot Summer
https://running.competitor.com/run-hot-summer_164539


Hydration: Are Your Needs Different In Winter Vs. Summer?
h
ttps://running.competitor.com/hydration-are-your-needs-different-in-winter-vs-summer_94841


Why Running Is Harder In The Summer
https://www.bustle.com/articles/32790-why-running-is-harder-in-the-summer-15-reasons-only-runners-understand