Racing and Training With Purpose

Asking "why" and removing barriers will result in training with purpose. 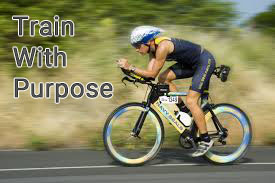 Part I - Internal versus External Motivation


So you’re signing up to do a triathlon.  Great!  Why do you want to do this?


In most ways, triathlon is no different than anything else we want to do with our lives.  I’ll dig into the question of why and hopefully deliver some keys to keep you on your triathlon journey…keys that can be applied to the other goals we make for ourselves in non-triathlon areas of our lives.


So we’ll start with the question of “why?” and break it down.  Completing a triathlon can percolate out of some internal motivation to test yourself, make a lifestyle change, or because you’re sidelined from your main sports desire and need an outlet to release pent-up workout energy.  These are all good reasons.  Alternatively, maybe the seed for completing a triathlon comes from some outside influence… you have a family member who has cajoled you into doing one, or you want to share some common interest, or a “friend” has challenged you.  This last may have involved alcohol and now you find yourself wondering what you’ve gotten yourself into.  Don’t worry, you’ll probably thank said “friend” later.


Why answer “why?”  There will be times we need motivation, and the answer to “why?” may be the difference between pulling the covers over our head and opening the door and embracing the reality of a getting in our workout in the cold pre-dawn morning.  If you are internally motivated, you’ll soon realize disappointing that face staring back at you in the mirror is a rough start to the day (often far rougher than the cold and dark air).  We may also realize the discord of missing a workout makes us intolerable to be around and a solo workout is preferable to a day apologizing to those around us.  Disappointing that friend or family member is often the biggest motivator when we’re externally motivated.  Let’s face it, we humans and our ancestors have been social creatures and externally motivated for 10,000 or even 100,000 years.  If you’re externally motivated, recruit that “resource” to help you work out.  Arrange to work out together rather than by yourself.  Establish a routine where you report your workout to each other if you cannot work out together.


Motivation is more of a “primary/secondary” arrangement rather than a strict “either/or.”  “BT” that would be “before triathlon” not Beginnertriathlete.com, I needed to lose weight and get fit.  My internal motivation was that I’d enjoy a backpacking trip more if I was properly prepared for it.  It also appealed to my cheapskate self that losing weight inside my skin was better than spending insane amounts of money for lighter weight gear.  I had a friend doing a similar trip and for him, weight loss was far more imperative.  I offered that he could join me on weekly walks and he accepted my offer.  All through the Illinois winter, we’d arrange to meet and walk.  A few times, I considered bailing (too busy, weather too crappy, not motivated) but wasn’t ready to disappoint my friend.  As often as not when I felt like this, we both showed up and over the course of the walk found out we both wanted to bail.


I’ll leave debates about whether internal or external motivation is “better” to others.  Each is different and the real key is to exploit what each offers to keep us on track with our goals.


It has been said that a goal is simply a dream with a deadline.  I prefer a slightly different description of a goal, as “something you want to achieve that requires changes to your current life.”  By contrast, an expectation is a realistic outcome based upon the current situation.


As applied to life outside triathlon, you can think of goals and expectations as they pertain to your bank account balance.  Maybe your GOAL is to have $1,000,000 in your bank account on your 50th birthday, but your current balance is $25,000.  You have an expectation that tomorrow, your bank balance will be... about $25,000… Is there anything you can do to drastically change your expected balance tomorrow?  Not really (and I don’t advocate offing a rich relative, robbing a bank, or buying a bunch of lottery tickets).  If you’ve saved that $25K in the past year, you may not need to change anything and your $1,000,000 “goal” is a long-range expectation.   For most of us, we’ll have to change our spending to save more, learn about investing, and make other changes to achieve this goal.


In the winter between my first and second triathlon season, I signed up for my first HIM.  As part of that, I set a couple of GOALS, one being to finish in less than 6 hours and another being to ride a 20 mph bike split.  During my first spring rides, I was riding 15-16 mph…  The gap was large, but since my GOAL was 20 mph (and in my mind, 19.99 wasn’t 20), I rode lots.  And I rode hard.  And I rode rolling hills like I’d experience on the course.  And I got clip-on aero bars.  And I rode 20.36 mph in the race!!  Now I missed my 6 hour goal, finishing in 6:18, but the 20 mph split was more important to me than finishing in 6 hours.   (Looking back, I really putzed my run training.)


It’s important to separate expectation creep from goal creep.  As my training went on, my expectations increased.  I went from expecting 15-16 mph on my rides to 17-18 mph and then 19+ mph.  The whole time, my goal stayed 20 mph.  Goal creep occurs when we confuse expectations with goals.  There isn’t much difference between a little goal and a stretch expectation.  We set a little goal (nothing wrong with that) and feel little satisfaction when we accomplish it.  We continually ratchet that stretch expectation up a little at a time and gain little victories, but rarely that huge sense of accomplishment of achieving that BODACIOUS goal.


More on goals in my next installment…


Search the BT forums, and you’ll find frequent questions from aspiring triathletes about setting time goals and frequent statements by beginners and experienced triathletes alike that they “just want to finish” a race.  Commonly, someone will post some “goal” time and then admit they have a more aggressive secret time goal and even a super-secret time goal.  Oftentimes, you’ll hear friendly “advice” to not apply the pressure of a time goal to your race.  You’ve probably heard the justification…you don’t know what race day will be like…it could be hot, cold, rainy, windy…blah, blah, blah…


I’m going to rip that fig leaf off!


It’s OK to have time goals.  It’s OK to have BODACIOUS time goals!  It isn’t good to have bodacious expectations.  Miracles rarely happen on race day.  Here’s another little secret:  that “super-secret goal” that you don’t mention to anybody IS YOUR GOAL!


Why do we pretend time goals and super-secret time goals aren’t important in an event measured in time?


And so we pretend our goal is to “just finish” and then our loved ones can’t understand why we’re disappointed or frustrated after finishing a race but not hitting that “secret” or “super-secret” time goal.


Nurture your goals and put “failure” in proper perspective.


In my earlier article, I talked about setting and achieving a 20 mph bike split in my first HIM.  I put that goal out there publicly and accepted the risk of not achieving that goal.  I got the usual justification for not making that MY goal when I asked how best to achieve it.  I achieved it!  I also put out there publicly my goal to finish in less than 6 hours.  I didn’t achieve that goal.  Know what?  My family understood my disappointment when I didn’t hit that goal, but they still loved me.  Not hitting that 6 hour goal didn’t cost me my job or my home.  It remained an unmet goal at the conclusion of 2006 season.  I had other priorities in 2007 and 2008 and set a 12-hour IM goal for 2009.  I had the HIM on my 2009 race calendar and was certainly on track to achieve my 6-hour HIM goal that year.  A bike crash in my IM took me out of doing the HIM in 2009, so I deferred until 2010.  A staph infection took me out of the HIM in 2010 days before the race.  I’ve only done 1 HIM and not (yet) met my 6-hour goal.  In the years since, that unmet goal has drifted away.  I came close to my 12-hour IM goal but it too has drifted away unmet.


Coming back to the justifications against setting time goals such as you cannot control the weather and weather can significantly affect race day performance.  True and true!  However, if that goal is truly that important to you, aren’t you going to do whatever you can to not allow something you can’t control to ruin it?  By holding onto and working towards my goal, I went from 10% chance of success (IF conditions are perfect) to 50% (even in average conditions, I could do it) to 75-80% (I could still achieve it unless conditions were downright bad).  Had I listened to the well-meaning advice to not hold that pace goal, I might very well have spent the year “training recreationally” (characterized by skipping, shortening, or modifying workouts to avoid those “hard efforts”) and not even been able to take advantage of perfect race conditions.  Talk about an opportunity squandered!


So go ahead.  Publicize your goals, even that “super-secret” one you consider BODACIOUS.  You’ll probably surprise yourself and gain far more along your journey than playing it safe.  Remember…it’s YOUR life and YOUR goal.