In my first article in this series, I explained how and why I ended up on a very restrictive nutrition plan, in which I eat the same series of small meals each day, every day, with the exception of two free meals per week.

No coffee, no soda, no sweets, no potatoes, no chips, no crackers, no cheese ... you get the idea.

All I really want is to be a hardbody again. I like the way I looked after a 2010 Ironman, and after a 2021 Ironman, I didn't look the same way. I'm 45 now and I did all of that training (SO MUCH TRAINING!) and still looked a little fluffy. I know I'm healthy and I can be whatever body type I want. But I want visible abs. And it didn't hurt that I suspected my nutrition was impeding my performance. I know I wasn't fueling right on race day, and there were always so many variables, it was hard to pin down what worked and what didn't work.

So here's my update, six weeks in.

At the beginning, it seemed like my weight was just fluctuating up and down with no real direction in mind.

Now it's clear I've lost 10 pounds and I consistently weigh 10 pounds less than when I started. You know how people say, "The last 10 pounds is the hardest to lose"? Well that's the only 10 pounds I wanted to lose. And it has been hard. This plan is no joke.

I've been using a Renpho digital scale. They are affordable and accurate and claim to also calculate body fat and a lot of other metrics. I don't know that these are really correct, but I think the trends are reliable at least. My trainer and nutritionist, Travis, says to weigh myself three times a week, so I chose Monday, Wednesday and Friday. I could tell right away that it would be easy for me to get obsessive about the scale. Sometimes I see it and want to get on and check, but I only allow myself to do that on Monday, Wednesday and Friday. 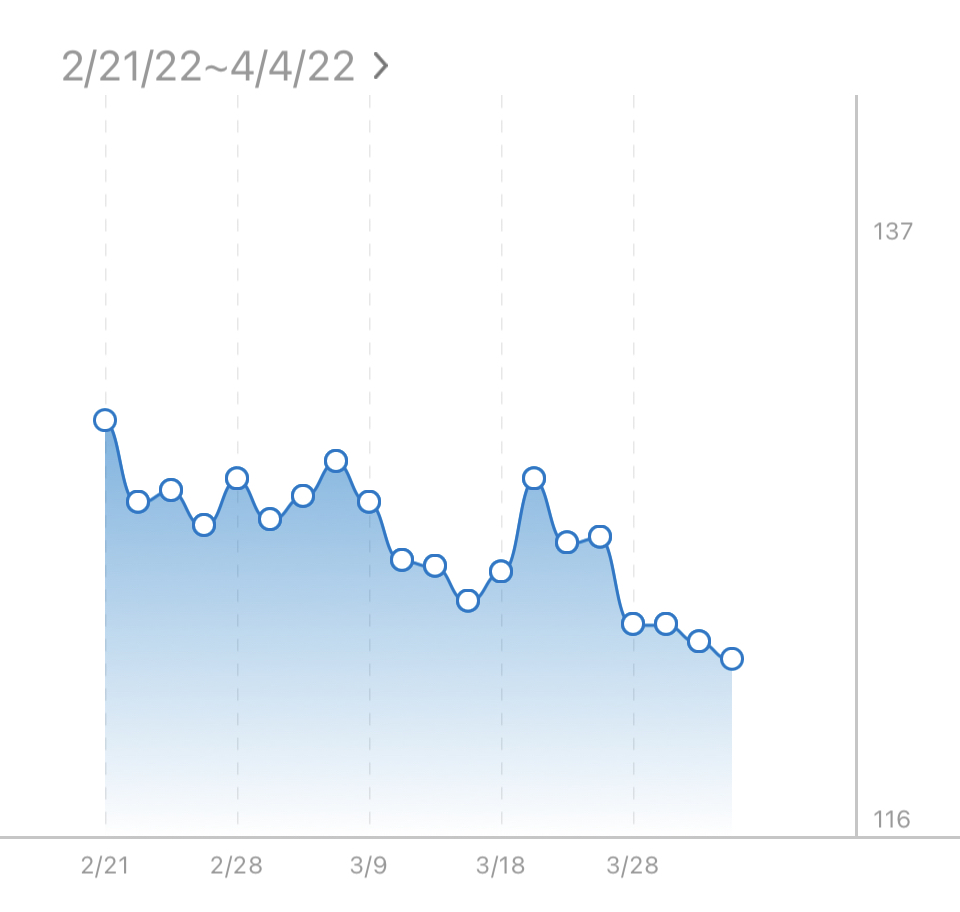 In terms of sticking to the plan, I've not cheated. Many days it's been very, very hard. It helps to know I'm paying Travis, and every once in a while I will really have a craving for Ruffles and I'll text him and he will talk me down.

My treat meals (free meals or cheats) have become more sensible. At the beginning, I would save them both for weekends so I could share them in social settings, and I would absolutely gorge on filet and potatoes and bread and dessert. Now I have one mid-week (usually at the end of my long ride day on Wednesday when I feel like I'm starving anyway) and one on the weekend. Lately I haven't felt like having a ton of starches or cheese. Sometimes I'll have a big dessert, but not always. Saturday night I didn't even finish my almond pudding at the Turkish place. I ALWAYS finish dessert. It's like food has somewhat lost its hold on me.

Another development is that I went on a week-long road trip with my teen kids, visiting colleges. I worked with Travis to understand how to take my meal plan on the road. It wasn't really that hard. An egg white omelette became five hard boiled eggs with the yolks removed (it's actually quite easy to pop them out after I cut them in half). Steamed broccoli and cooked lean ground beef became raw broccoli and high quality beef jerky. I was surprised that I like this better than the cooked version. A tortilla with lean chicken and two cups of romaine became the same chicken and veggies mixed with a small amount of brown rice, and romaine on top. I packaged these up in Ziploc bags before leaving and heating it up in a Tupperware at the hotel each night. My protein drink and 10 almonds was pretty easy to do in the car. The meal where I can choose between a yogurt with flaxseed or a protein bar clearly was the protein bar every time for portability.

The benefit of this trip is that it gave me some new ways to deal with my nutrition plan that can be managed without cooking. Sometimes I would get really stressed out at home because I’m hungry and it’s time to eat, but I don’t have time to make the food and get on a meeting or leave on time to get the kids. Now I can do the eggs, the meat & broccoli, the protein shake and nuts all on the go, in addition to the protein bar.

Here's a photo of the coolers, dry goods bin, and smaller bins and coolers I used on the trip to manage a week's worth of food, plus lunches and snacks for the kids. 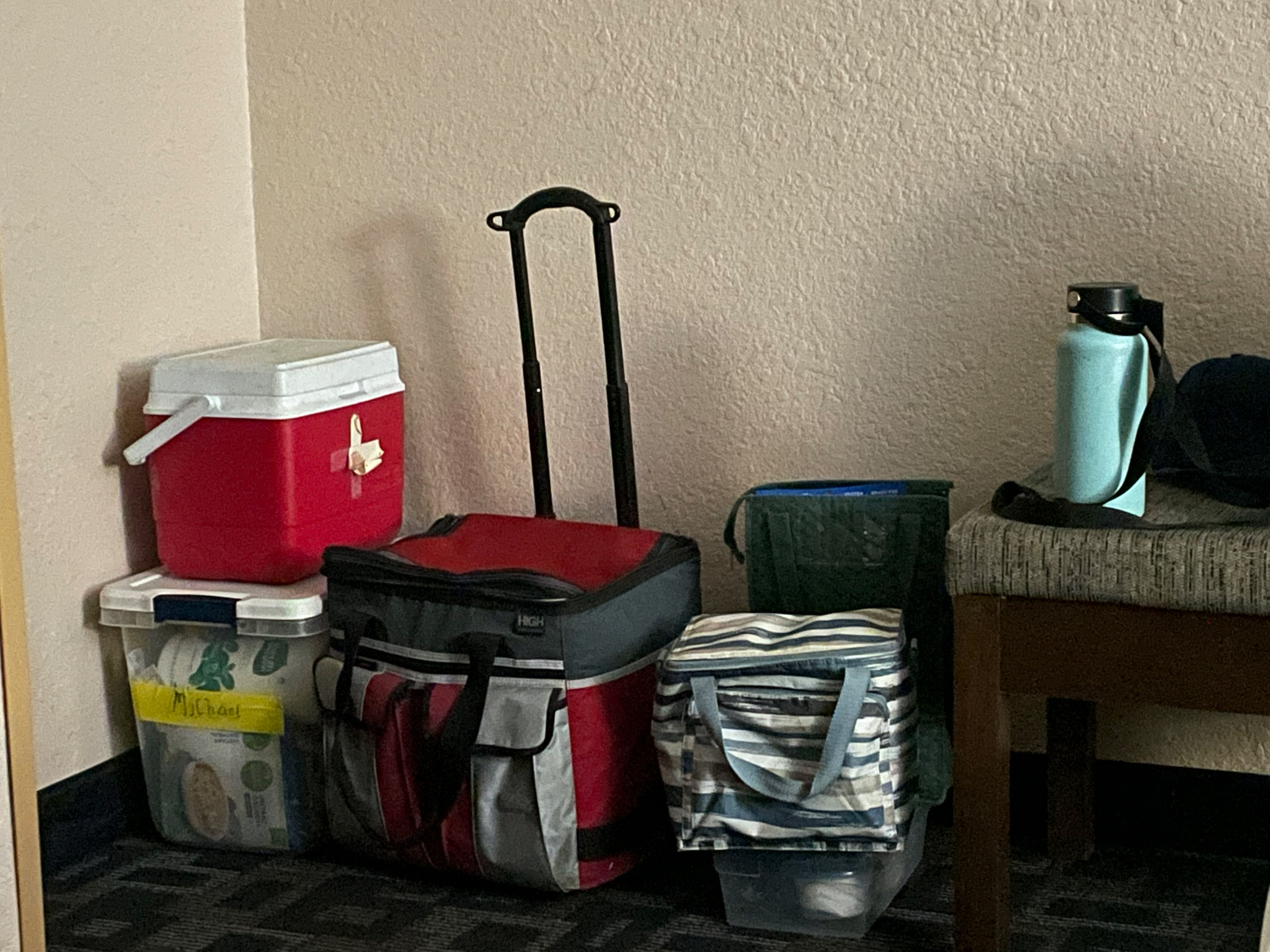 I created a better inventory system so I know when I'm running low on anything at either of the two houses where I live. (I'm on and off with the kids so they get time with their dad.) I bought an extra food scale so I wasn't dragging one back and forth.

The biggest surprise so far has been that I continued to lose weight the week of the road trip, even though my cardio training went from 15 hours the week prior down to about two hours the week of the trip. It really seems to be true that if you want to lose belly fat, it has to happen in the kitchen, not via cardio.

The last two weeks, I've been working in bottles of Infinit custom liquid nutrition on my longest workouts, under the careful watch of Travis, who helped me formulate the custom mix.

I've also been lifting twice a week, which is something I always said I would do but never did. According to Travis, that makes a big difference in triggering the body to burn fat instead of muscle. Muscle is easier to burn, and (in the absence of extra carbs) the body will turn there first, instead of going through the arduous process of turning on the "fat burning furnace." But if I am lifting weights, I'm sending signals to the body that say, "Hey, make more of this muscle." This message then stands in opposition to the body's inclination to burn muscle. So that's helping. Plus it provides some definition to my body shape. Slowly. I still think I look mostly the same, but knowing I'm working toward something is a big confidence booster. And the numbers on the scale, while not something that is part of my goal, help me see that all the work is actually making a quantifiable difference.

I'll keep you update here as to how it's going. It seems like I just keep going like this until Ironman Maryland in September. I'd really love to have a bit more flexibility and a few more treats, but the way my psychology works, it's easier for me to stay on the straight and narrow. Here's to visible abs at 46, and a 13-hour Ironman.