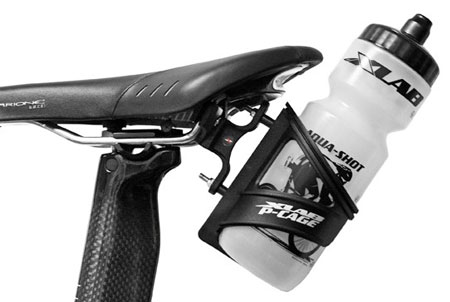 The DELTA WING rear hydration carriers were developed to help improve aerodynamics on triathlon and road bikes. Recent wind tunnel tests have proven that standard frame-mounted bottle cages have high aerodynamic drag. The DELTA WING 100 and 200 systems tuck neatly behind the saddle for no measurable drag.

The DELTA WING 100 and 200 are manufactured with a sturdy proprietary composite mount, preventing the entire system from swaying, allowing for fast and safe access to the bottle. Another safety feature of the DELTA WINGs is the included Loctite and lock nut hardware, ensuring security of the carrier on rough roads.

The difference between the 100 and 200 models is the cage that is included with the mount. The DELTA WING 100 comes with a nylon-fiberglass composite P-CAGE whereas the DELTA WING 200 comes with a carbon fiber GORILLA cage. Both cages are funnel shaped allowing for easy insertion of water bottles. In addition, XLAB has tested each cage’s grip force to help prevent bottles from slipping once inserted. The P-CAGE has five pounds of grip force compared to the GORILLA at seven pounds. The GORILLA cage has over two times the gripping force of conventional carbon cages.

An optional accessory to the DELTA WING carriers, just released by XLAB, is the X-STRIKE, a CO2 holder that tucks neatly between the mount and the bottle cage. It can hold up to four CO2 cartridges, providing fast access for inflation and saves room in a rider’s bag for other vital items. The X-STRIKE CO2 kit can be mounted behind any standard bottle cage and fits on XLAB’s CARBON WING and SUPER WINGS as well.

More information on the DELTA WING 100 and 200 can be found at: http://www.xlab-usa.com/delta-wing.html.

About XLAB USA
XLAB has been an innovator and important part of the triathlon industry for 20 years, helping athletes win 23 World Championships. Our engineers passionately design, analyze and test the hydration and storage systems allowing for extremely light and yet extraordinarily reliable products that are unmatched in design, technology and style. For more information about XLAB, visit www.XLAB-USA.com.