The Seven Sports of Triathlon

If you're training your swim, bike and run, you're almost halfway there! This article explores what most athletes miss, and how to integrate it into your training plan.

Many athletes focus their training on swimming, biking and running, without paying attention to other key elements of fitness and racing. Let's talk about what they are.

Technology is everywhere.  Power meters, heart rate monitors, and GPS watches have invaded the world of endurance sport and have given athletes and coaches insight that has been previously reserved for Olympic training centers and top secret testing laboratories.  We can measure pace, heart rate, power, temperature, hub torque, and dozens of other variables that are indicators of an athlete's fitness level.

After downloading a pace or power file, a coach can almost literally re-experience the ride with the athlete and provide them insight into what happened and why.

When training and racing with technology, we can answer questions such as:

"Would I be better off with a higher cadence?"

"What would my pace have been if I were on level ground?"

Some people think that merely purchasing a GPS watch or power meter will immediately make them faster, but that's like expecting to be a master cabinet maker simply by purchasing new woodworking equipment.

You have to be able to interpret the data and incorporate the data into a training plan.  Technology helps coaches do that more effectively and with less trial and error.

Figuring out our limiters...

So here we are.  We've just completed the first Run-Bike-Run of the year and did fairly well, and now we're settling down to take a look at our power file.  Exciting stuff to be sure!

"I trained hard all winter and I can't wait to see how I did...", you gleefully proclaim as you pull up your file on WKO+.

What would you imagine is the very first thing that this athlete looks at when viewing their data?

Did anyone say "Pacing"?

That's what I thought.

Most people think it's their VO2 Max or Lactate Threshold that's holding them back, and to some extent, that may be true.  However, if "VO2 this" or "lactate that" were the only measure of ability to go fast while swimming, cycling or running, then the people with the highest numbers would win every race.

And that's clearly not the case.

Could there be more to multi-sport than just swimming, cycling and running?

Pacing is of primary importance, but most athletes pay lip service to the correct way to do it or fail to understand it entirely.  How important is it?  Let me tell you a little story...

The Seven Sports of Triathlon

"It says right here on the entry form that it's a triathlon," uttered Ironman Ivan as he signed up for the Annual M-Dot 140.6 Bonkout held near his hometown of Tendonitisville, so he began to assemble a training plan that would make Craig Alexander run for cover.

Go to the pool four times weekly and swim 3000 yards each day.  Check.

Get on the bike and ride for 5 hours every Saturday from November until August.  Check.

Run 80 miles each week on my easy weeks.  Check.

Fast forward 11 months and Ivan is nearing the end of his marathon at the M-Dot Bonkout.

And covered in a film that makes him a biohazard in 43 states.

What could have possibly gone wrong here?  Ivan had completed training in all three sports the likes of which our sport has never seen.  Obviously, there's more to it than swim, bike and run.

There are SEVEN sports in triathlon.

If you're not training the other four, you may end up like Ironman Ivan at your next event, and nobody enjoys being called a "biohazard".

"So what are the Seven Sports of Triathlon?" you may say. "You're killing me here! Just tell us!"

There are indeed FOUR other skills in addition to swimming, biking and running that you need to master to be successful at long course events.

The first three sports in triathlon refer to the items you'd see on a traditional training plan - Swim, Bike and Run.  These are the Physical components of multisport and the ones that most athletes spend most of their time practicing.  If that's as far as your training has taken you, you're really less than halfway there.  The Physical components make up the first "P" on our list.

The second of the "Three P's" in triathlon allow you to become invested in your body's Physiology. These skills are nutrition, hydration and pacing.  The bulk of your long course training should emphasize learning these elements and how they will fit into your "A" race.  When you show up for a half or full Ironman, you should have a very good idea of what you should be eating and drinking. You should also have a very good idea of the correct pacing effort to ensure sustainability.  These plans are not taken from your favorite pro's article about "What I Ate When I Won Kona".  These plans need to be tailored to you and practiced routinely throughout your season.

It sounds basic, but you'd be surprised how many athletes forget to train and practice nutrition!

The final "P" refers to the Psychological component of long course training.  Another name for this skill set might be "Mental Toughness", but that didn't start with a "P".

What will you do when things don't go exactly to plan on race day?  How will you handle a bonk?  A flat tire?  The course running out of water at mile 50 of the bike?  All of these questions allow you to really find out how you will deal with adversity, and what you're really made of when things don't go your way.

Remember - there's a lot more to triathlon than swimming, cycling and running, and the more time you consider the other four components when designing your training program or choosing a coach, the better off you'll be.

Maybe that's what draws us to multisport  - The mastery of multiple sports.  The ability to deal with adversity.  Finding out what we're truly made of.  It's all part of the road to Ironman, and we wouldn't have it any other way. 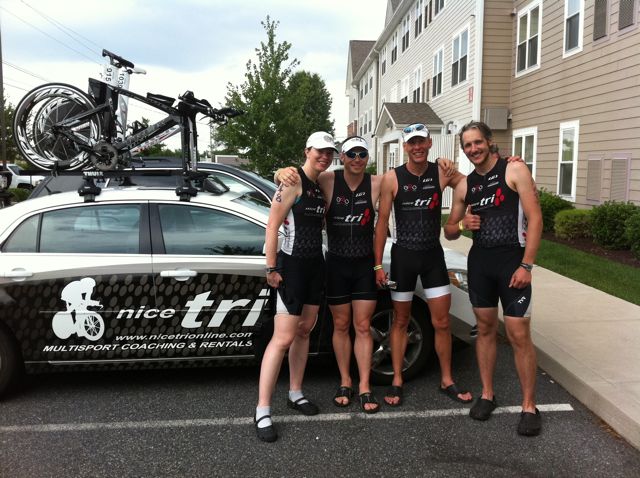 Dan Jarecke is the owner of Nice Tri Multisport Coaching and Rentals and has been racing and competing in multisport since 2005.  His coaching company owns both a road and triathlon team that caters to athletes of all skill levels and abilities.  Nice Tri rents Zipp wheels and wetsuits to athletes around the country.