The night before my first triathlon I didn’t sleep very well. My thoughts were on the next day, the enormity of the task looming frighteningly close.

The night before my first triathlon I didn’t sleep very well. My thoughts were on the next day, the enormity of the task looming frighteningly close. When I signed up for it back in December of last year, it had been comfortably far away and therefore it was not very real. Now, with a bag packed full of equipment, tri-suit hung up and shoes laid out ready, it was looking very much like I would have to go through with it.

Despite my misgivings about timing and logistics, my family and my boyfriend’s family managed to get themselves to our house in plenty of time, and put up with my fussing and organizing. I was incredibly nervous, and this manifested itself in quietness and the relentless need to organize things, tick things off a to-do list and I couldn’t keep still for more than two minutes.

But by the end of the day we were triathletes, and it felt amazing! Crossing that finishing line was very emotional – I felt like crying. This was partly because of exhaustion, and partly because of an overwhelming sense of relief that I had made it to the end. What made it better, was that all of my family and friends were cheering really loudly from the other side of the finish line and I could hear them as I rounded the corner of the running track.  There was also a man with a microphone who had spotted my race number and found my name on his list and was shouting encouragement that echoed around the arena. That mixed with the cheering was nearly too much, but I held it together.

It is worth doing a triathlon for that feeling as you finish. It was a huge sense of achievement, and I was really relieved to have made it round in one piece. The praise from our supporters was an incredible boost, both as we were going round and at the end. It’s one way to make your family proud, although not a very easy one. Seeing a few familiar faces lining the bike and run course was a lovely boost, and they were handy for taking some action shots as I whizzed around the corners on the bike.

In a strange way I enjoyed the Tri Together triathlon for the Leonard Cheshire Disability. It was strange because this is not something that I normally do. It felt strange to be taking part at all, and as I was going around the course, there were a few flashes of realization that I was actually in the moment, doing it, and that I had to make the most of it because it would be over soon. In fact, it was over in one hour and forty four minutes in total, and that is a time that I am really happy with. It wasn’t the best time, and it definitely wasn’t the worst.  The guy that came in first did it in just over 57 minutes, but he is a member of a triathlon club and a Team GB Paralympics athlete. Given that 80% of participants in this event were beginners, it seemed a bit like an unfair advantage to be so good. I thought this as he lapped me continuously on the run circuit, but I kept on going.

The whole event was incredibly tough, I will admit that. Nervous and squashed into a lane with five other swimmers, the swim stage was more of a flounder than a smoothly executed front crawl. I was trying hard not to kick the other swimmers behind me, even though the marshals staggered the start times, it wasn’t long before everyone was vying to over-take the other. We had different colored swim hats on to differentiate between us, which was helpful for the marshals who could let us know when we were nearing the end. Despite the reminder, there was a strong emphasis on keeping track of your own laps, and one of the best pieces of advice I think I received was to keep a number of rubber bands on your wrist.  This meant after every bike lap and every run lap, I moved a band along my wrist to mark how many I had done. With so much else to remember, it was helpful to have a back up so I didn’t lose count. Unfortunately it looks like some people did lose count, as on the results sheet there are a few disqualifications for not enough laps, and people who did extra laps who clocked up a longer overall time. Thankfully I managed to do the correct number of swim lengths (sixteen,) bike laps (six) and run laps (five.) My boyfriend did really well, and came eleventh out of the men, with a time of one hour fourteen minutes overall. He was faster than me, but that’s ok. We supported each other through the training and through the day itself, and even managed to run together for a short while, which was an added bonus.

Despite the uncertain start, I recorded a personal best on the swimming which I was very pleased with. I did sixteen lengths in 12 minutes 20 seconds, before carefully jogging to the first transition area. Via an electronic tag on my ankle, the organizers were able to see exactly how long I was in each transition, as well as the actual stages of course which I thought was very clever.

The transition area was huge. On the training day we attended in May, they had set up a small transition area, so I thought it would be a similar size, but this was something else. It was guarded by marshals, surrounded by high fencing and had dozens of bikes lined up on racks, with sneakers, snacks and towels lined up neatly beside them. I balanced my helmet on the handlebars with the straps hanging open and ready to be put on speedily. In fact I was so comfortable in my helmet I nearly left the second transition with it on, but I soon realized something was not quite right and ran back to my transition area and took it off. I think the adrenaline was taking over, and with so much to remember all at once it slipped my mind to take it off. I wouldn’t have got past the marshals anyway.

I enjoyed the cycling, apart from the hill, and made it round the 15 kilometer course in just over 44 minutes. The run was the hardest part. After the swim I felt a bit tired but with the bike stage I was obviously using my leg muscles so my arms got a rest. But after the cycling there is no rest for the legs, just more effort. I had to walk a bit on the running lap – I was exhausted by this point – but there was a good camaraderie with other participants I had met earlier and we encouraged each other. I think it would have been nicer if people interacted a bit more, but most of the marshals were amazing and really encouraging. This definitely helped me when I was struggling.

For days afterwards I couldn’t believe I had done it. I am now officially a triathlete, who would have thought? And yes, the free massage and cupcakes at the finish line were every bit as good as I had hoped. 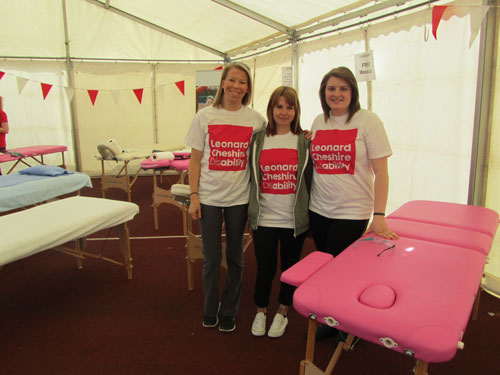 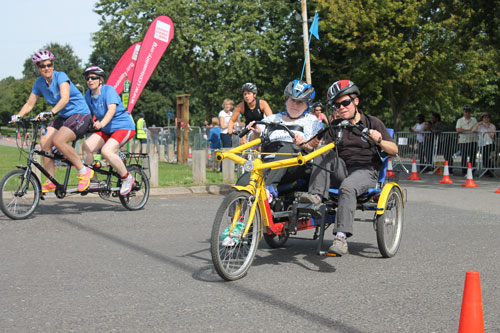 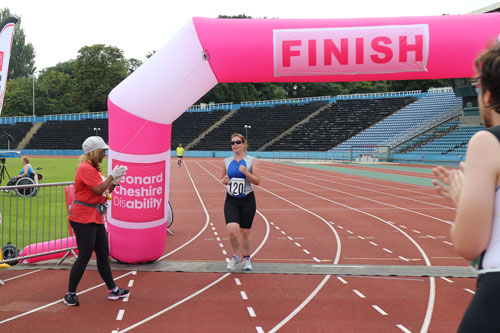 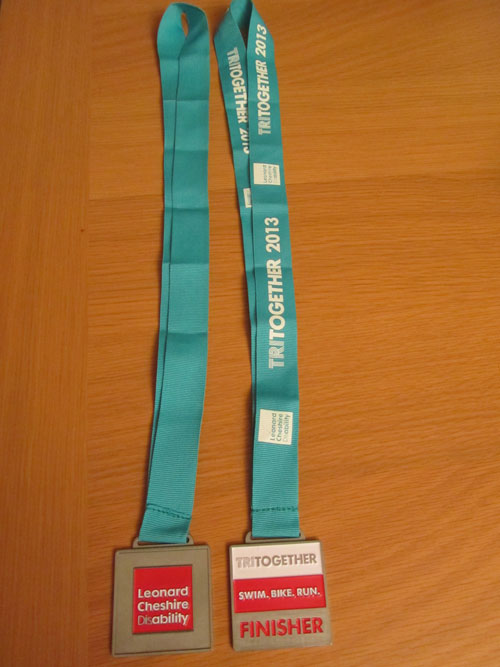